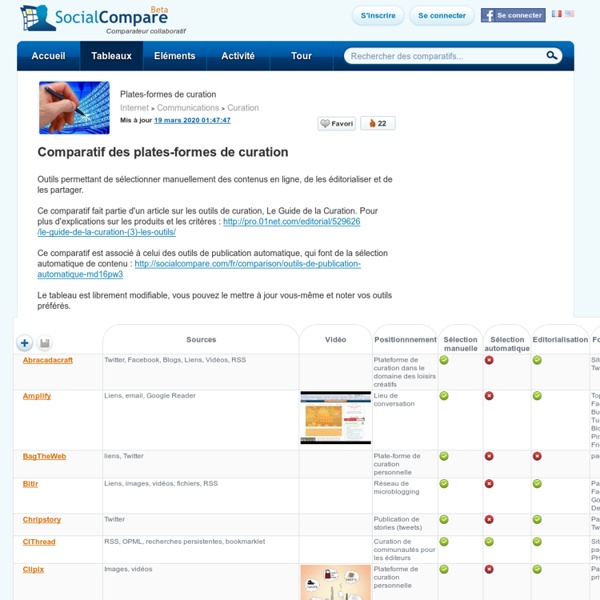 The 5 Models Of Content Curation Curation has always been an underrated form of creation. The Getty Center in Los Angeles is one of the most frequently visited museums in America – and started as a private art collection from one man (J. Paul Getty) who had a passion for art. The Seven Needs of Real-Time Curators I keep hearing people throw around the word “curation” at various conferences, most recently at SXSW. The thing is most of the time when I dig into what they are saying they usually have no clue about what curation really is or how it could be applied to the real-time world. So, over the past few months I’ve been talking to tons of entrepreneurs about the tools that curators actually need and I’ve identified seven things. First, who does curation? Bloggers, of course, but blogging is curation for Web 1.0. Look at this post here, I can link to Tweets, and point out good ones, right?

Managing the business risks of open innovation Several years ago, something interesting happened in the infrastructure software sector: IBM and a number of other companies pledged some of their own patents to the public to create IP-free zones in parts of the value chain. They did so when a 2004 report showed that Linux, the open-source operating system that had emerged as a viable, low-cost alternative to established operating systems, such as Microsoft Windows and Unix, was inadvertently infringing on more than 250 patents. By voluntarily pledging not to enforce hundreds of IBM’s own patents so long as users of the IP were pursuing only open-source purposes, the company led the creation of an alliance of patent holders dependent on (and willing to defend) open-source software against lawsuits. One result: IBM substantially increased the share of its new products based on Linux. This example seems specialized and unusual; after all, who would give away patents to make more money from innovation?

9 content curation tools that better organise the web Content curation is a huge deal on the web today. As content on the web grows exponentially, our ability to make sense of it is inversely proportional. In other words, we are fast sinking under the sheer amount of content pouring onto the web every day. The social web hasn’t made life any easier on content production either – in fact its lowered the barrier to entry. Delivery Foreseeing the future, whatever the name given to the endeavour*, faces two major tasks. First, we have the analysis, the process according to which the foresight, forecast, or, more broadly, anticipation will be obtained. Second, the result must be delivered to and understood by those who need it because they will act on it, to the least integrate the new knowledge received in the decisions they will take**. A huge challenge runs across both those tasks: overcoming the various natural and constructed biases that limit human understanding. Much thought is usually given to analytical methodologies, which may be seen as nothing else than ways to overcome biases. Analysts commit themselves to many years of study, and force themselves to struggle against those biases, including through their own research and reflections.

Content Curation Guide for SEO - What, How, Why The author's posts are entirely his or her own (excluding the unlikely event of hypnosis) and may not always reflect the views of Moz. When it comes to the Internet, I imagine it as the warehouse where the Ark is archived at the end of Indiana Jones – Raiders of the Lost Ark. The Ark is that outstanding content someone has produced and that no other will be able to see again, because it is forgotten and hidden between gazillions of other contents. Apart from the gigantic volume of pages present in the Internet, for a long time, search spam has been making the discovery of reliable sources difficult; and – let's be honest – Social Media has enhanced this issue, because it added even more noise and dispersion. Actually, as Mitchel Kapor said once, getting information off the Internet is like having a drink from a fire hydrant. To tell the truth, this problem is not new.

Manifesto For The Content Curator: The Next Big Social Media Job Of The Future ? Every hour thousands of new videos are uploaded online. Blog posts are written and published. Millions of tweets and other short messages are shared. To say there is a flood of content being created online now seems like a serious understatement. Until now, the interesting thing is that there are relatively few technologies or tools that have been adopted in a widespread way to manage this deluge. The next step in open innovation For most companies, innovation is a proprietary activity conducted largely inside the organization in a series of closely managed steps. Over the last decade, however, a few consumer product, fashion, and technology businesses have been opening up the product-development process to new ideas hatched outside their walls—from suppliers, independent inventors, and university labs. Executives in a number of companies are now considering the next step in this trend toward more open innovation. For one thing, they are looking at ways to delegate more of the management of innovation to networks of suppliers and independent specialists that interact with each other to cocreate products and services. They also hope to get their customers into the act. If a company could use technology to link these outsiders into its development projects, could it come up with better ideas for new products and develop those ideas more quickly and cheaply than it can today?