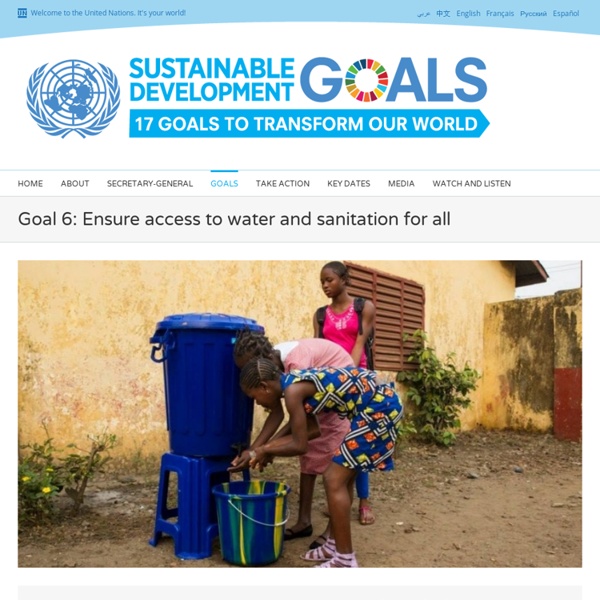 Water and SanitationFlorencia Soto Nino2016-08-17T17:54:39+00:00 Share this story, choose your platform! Clean, accessible water for all is an essential part of the world we want to live in. There is sufficient fresh water on the planet to achieve this. But due to bad economics or poor infrastructure, every year millions of people, most of them children, die from diseases associated with inadequate water supply, sanitation and hygiene. Water scarcity, poor water quality and inadequate sanitation negatively impact food security, livelihood choices and educational opportunities for poor families across the world. By 2050, at least one in four people is likely to live in a country affected by chronic or recurring shortages of fresh water. ‘Radical’ investments needed to meet global water and sanitation targets – UN report Read More High-Level Panel on Water: World Water Day statement Read More On World Toilet Day, UN spotlights the impact of sanitation on peoples’ livelihoods Read More

Public Health at a Glance - Water, Sanitation & Hygiene Water, sanitation and hygiene and the Millennium Development Goals Better hygiene and access to drinking water and sanitation will accelerate progress toward two MDGs: “Reduce underfive child mortality rate by 2/3 between 1990 and 2015” and “By 2015 halve the proportion of people without sustainable access to safe drinking water and basic sanitation”. Meeting the latter goal will require infrastructure investments of about US$23 billion per year, to improve water services for 1.5 billion more people (292,000 people per day) and access to safe sanitation for 2.2 billion additional people (397,000 per day). Fewer than one in five countries are on track for meeting this target. top How do water, sanitation and hygiene affect health?

Report shows impact of poor sanitation on world’s health By Barry Mason 18 April 2002 A report entitled “The Human Waste”, issued by the British charity Water Aid and Tearfund, a British relief and development agency, details the horrific consequences of poor sanitation and lack of clean drinking water. Lack of sanitation now affects about 40 percent (2.4 billion) of the world’s population and is expected to rise to 50 percent by 2025. Diarrhoea caused by bad sanitation kills nearly 6,000 children a day—an annual toll of two million deaths. People suffering from waterborne diseases occupy half the world’s hospital beds. Already half of Asia’s population lacks adequate sanitation and in China, India and Indonesia twice as many people die from diarrhoeal diseases as from HIV/Aids.

Poor Sanitation and its consequences Poor Sanitation and its consequence By Mustapha Sesay Sierra Leone e-mail mustaphasesay2007@yahoo.com Poor sanitation which has always been associated with Africa, has significant negative effects on the national economy and that 49% of all reported sickness and injuries in Sierra Leone is related to poor sanitation. Lack of adequate sanitation is a major threat to the environment which includes the degradation of the urban environment by the indiscriminate disposal of solid and liquid waste and the pollution of fresh water and lakes by untreated human waste, the result being smaller, contaminated fish catches.

Overflowing cities: The impact of poor sanitation in urban areas - News - WaterAid Worldwide, it is estimated that more than 700 million people living in urban areas do not have a decent toilet. Of these, 100 million have to defecate in the open. Our second State of the World’s Toilets report, Overflowing cities, examines urban sanitation around the world – an issue that’s becoming increasingly pressing as two thirds of the global population are expected to live in towns and cities by 2050. Nearly all the urban population growth is happening in developing countries, meaning that many are arriving – or being born into – overcrowded and rapidly expanding slums. Often, city planning and infrastructure-building have been unable to keep pace.

Water, Sanitation and Economy Introduction (Adapted from WHO 2004) All over the world, mainly in developing countries, diseases associated with poor water and sanitation still have considerable public health significance. In the year 2003, it was estimated that 4% of the global burden of disease and 1.6 million deaths per year are related to unsafe water supply and sanitation, including lack of hygiene.

Handwashing in the Developing World CDC at Work Diarrhea and respiratory infections remain leading killers of young children in the developing world, and claim approximately 3.5 million young lives each year. The Centers for Disease Control and Prevention (CDC) has been studying the role of handwashing in preventing these diseases in developing world settings. In a series of randomized, controlled studies of intensive handwashing promotion in Pakistan, CDC researchers found about 50% fewer diarrheal and respiratory infections among young children in low-income households that received weekly handwashing promotion and a supply of soap for about a year, compared with households that did not receive these interventions. The disease reductions were similar whether households were given antibacterial or plain soap 1, 2. These studies helped demonstrate that handwashing can prevent spread of two of the leading killers of young children in the developing world.

Clean water and sanitation - the keys to breaking free from poverty What are the benefits of safe water supply and sanitation? It is hard to overstate the benefits. When asked what would improve their lives the most, the majority of people in developing countries prioritise access to clean water. And for good reason. We know that clean water, along with decent sanitation and hygiene, are very effective in reducing poverty. It can help save lives, drive economic growth, keep kids in school and increase opportunities for women and girls. World Vision Australia Our approach to water, sanitation and hygiene Create a clean start to set children up for life The first 1,000 days of life are critical to children’s health, and water, sanitation and hygiene is a vital part of this. We integrate our work with maternal, newborn and child health, nutrition and early childhood development – far more effective than addressing any of these areas in isolation. Provide flow-on benefits for disadvantaged groups Inaccessibility to water and sanitation is a major reason why children with disabilities drop out of school.

Sanitation in Developing Countries - The Borgen Project According to joint WHO and UNICEF data, 36 percent of the world’s population lack access to basic sanitation facilities, and 768 million people regularly go without clean drinking water. Sanitation refers to the provision of safe facilities and services for human waste disposal. In other words, toilets or basic latrines. Inadequate access to sanitation and clean water kills 4,000 vulnerable children each day. This contributes to the cycle of poverty for families and communities in developing countries. The importance of water, sanitation, and hygiene as keys to national development Adequate drinking water, sanitation, and hygiene are all essential ingredients to ensure human health. The same is true for proper wastewater management, which is a basic prerequisite for environmental health. Improving upon these services will bring economic gains while also helping to build resilience given increasing climate variability.

Safe water means better health Access to safe water for drinking and cooking and adequate sanitation, is a leading global public health challenge and a major contributor to disease. But there are practical solutions that can turn this situation around. Did you know? More than 2.6 billion people lack basic sanitation facilities884 million lack access to safe water Source: Wateraid Our water solutions for communities Life With No Water Sanitation © WaterAid/ Anna Kari Gertrude Chiimbwe, Zambia Gertrude Chiimbwe giving her son, Hakalima, 3, a drink of water. “We don’t have a toilet here, so we go to the bush. I feel bad when I have to go there. Eliminate Open Defecation Open defecation refers to the practice whereby people go out in fields, bushes, forests, open bodies of water, or other open spaces rather than using the toilet to defecate. The practice is rampant in India and the country is home to the world’s largest population of people who defecate in the open and excrete close to 65,000 tonnes of faeces into the environment each day. Around 564 million people, which is nearly half the population of India, defecate in the open.