Alex Turner is towered over by leggy girlfriend Taylor Bagley 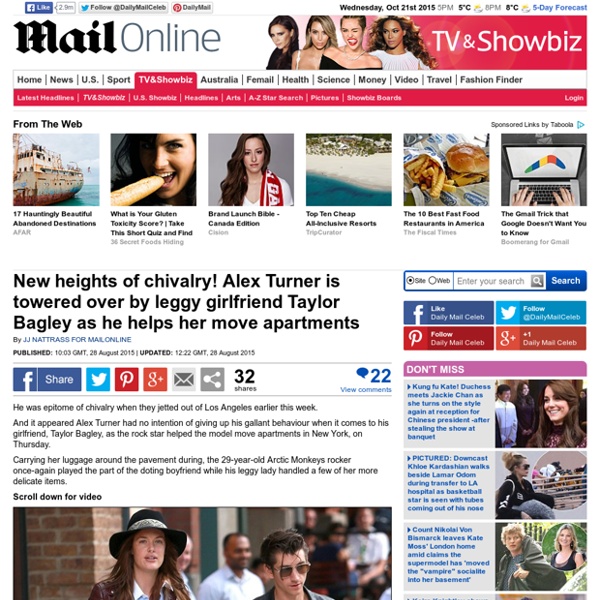 By Jj Nattrass For Mailonline Published: 10:03 GMT, 28 August 2015 | Updated: 12:22 GMT, 28 August 2015 He was epitome of chivalry when they jetted out of Los Angeles earlier this week. And it appeared Alex Turner had no intention of giving up his gallant behaviour when it comes to his girlfriend, Taylor Bagley, as the rock star helped the model move apartments in New York, on Thursday. Carrying her luggage around the pavement during, the 29-year-old Arctic Monkeys rocker once-again played the part of the doting boyfriend while his leggy lady handled a few of her more delicate items. Scroll down for video Chivalrous: Arctic Monkeys rocker Alex Turner helped his model girlfriend Taylor Bagley move apartments in New York City on Thursday Taylor, 27 - who was romantically involved with Scrubs actor Zach Braff for five years - put her toned and lithe legs on display in a pair of blue high-waisted shorts. The statuesque model teamed her tiny hotpants with a long shirt in a matching sky blue colour.

Alex Turner (musician) Turner was born in Sheffield, England to Penny and David Turner. He is an only child[4] and was raised in High Green, a suburb of Sheffield. His mother is from Amersham while his father grew up in Sheffield.[5] Both parents worked at local secondary schools; his mother was a German teacher and his father taught both physics and music.[6] He was exposed to "all sorts" of music at home,[7] including records by Frank Sinatra, The Carpenters, The Beatles, Led Zeppelin, The Beach Boys, David Bowie and The Eagles.[7][8][9][10] His father was a "jazz-head",[5] had been a member of big bands, and played the saxophone, clarinet and piano.[7] Turner took piano lessons until the age of eight.[11][9][12] Also in the summer of 2003, Turner played seven gigs in York and Liverpool as a rhythm guitarist for the funk band Judan Suki, after meeting the lead singer Jon McClure on a bus.

Alex Turner and girlfriend Taylor Bagley put on a cosy display at LAX By Jj Nattrass For Mailonline Published: 10:18 GMT, 25 August 2015 | Updated: 10:49 GMT, 25 August 2015 They've been virtually inseparable since they started dating earlier on this year. And Alex Turner couldn't keep his hands off of his model girlfriend Taylor Bagley as they arrived at LAX on Monday. With a protective arm wrapped around the leggy beauty's waist, the 29-year-old rocker put on a loving display with his leading lady as the couple prepared to jet-away from the sunny climes of Los Angeles.

Alex Turner and Miles Kane dance with fans in crowd at The Strokes' London gig – watch Arctic Monkeys' Alex Turner and Miles Kane were among the star-studded attendees at The Strokes Hyde Park show in London on Thursday (June 18). Footage of the pair dancing along to The Strokes' 'Barely Legal' has been posted online. Taken from the band’s 2001 debut album 'Is This It', it was the second track in The Strokes' 18-song set and followed show opener 'Is This It'. Watch the video below. READ MORE: The Strokes play first London gig in five years at Hyde Park - full report and setlist

17 Facts You Probably Didn't Know About the Arctic Monkeys From the moment the Arctic Monkeys released ‘Whatever People Say I Am, That’s What I’m Not’ in 2006, they’ve been one one of the most buzzed-about bands on the planet. Last year’s ‘AM’ finally proved to be a commercial breakthrough for them in the U.S. But how much do you really know about these popular British indie rockers? It looks like Alex Turner's other band, The Last Shadow Puppets, are recording a new album Arctic Monkeys frontman Alex Turner enjoyed success with his mate and fellow musician Miles Kane and producer James Ford when they released brilliant album 'The Age of the Understatement' as The Last Shadow Puppets in 2008. With Arctic Monkeys taking things easy since releasing 'A.M.' in 2013, it looks like Turner may have turned his attentions to that album's long-awaited follow-up. Speculation is rife since collaborator Owen Pallett - who arranged the strings for their debut - tweeted that he was working on a record that used the hashtag #tlsp2. The tweet has since been deleted but read 'That rare and thrilling moment when the record you're working on crosses the threshold into Classic Status #tlsp2" According to NME, neither Turner nor Pallett have responded to a request for comment.

10 Things you probably didn't know about Sean Bean From 1998 to 2008 Sean Bean played Napoleonic soldier Richard Sharpe in 16 episodes of the television series Sharpe, based on Bernard Cornwell’s best-selling novels. Now, in the two part HISTORY series, Sean Bean on Waterloo, the actor draws on actual eye-witness accounts of soldiers who fought in the battle to tell the story of the dramatic events of 18 June 1815. While Sean is busy providing us with gripping information about Waterloo, perhaps we should take a moment to familiarise ourselves with some interesting little known facts about the man himself. Sean Bean on Jon Snow's parentage, trimming his beard and being mistaken for Mr Bean Sean Bean's done a Reddit Ask Me Anything. And the Game of Thrones, Lord of the Rings and Legends star was completely brilliant. Among jokes about how often he finds himself dying on TV and film (ie LOADS), there were some real gems. Here are 10 fantastic facts you probably didn't know about Bean... 1. He is often confused for Mr Bean, the comedy character.

Sean Bean Early life[edit] Bean was born in Handsworth, a suburb of Sheffield, which was then part of West Riding of Yorkshire (the County of South Yorkshire was created in 1974). He is the son of Rita (née Tuckwood) and Brian Bean.[3] He has a younger sister named Lorraine. His father owned a fabrication shop which employed 50 people, including Bean's mother, who worked as a secretary.

Sean Bean with fiancée Ashley Moore at the IFTAs By Sharnaz Shahid and Bethany Minelle For Mailonline Published: 00:42 GMT, 25 May 2015 | Updated: 09:34 GMT, 25 May 2015 He has kept his latest relationship on the down low, maintaining a strong desire to keep the romance private. Sean Bean - Film Actor, Theater Actor, Television Actor Actor Sean Bean played the villains in Patriot Games and GoldenEye. More recently, he played Boromir in the Lord of the Rings trilogy and Odysseus in Troy. Synopsis Sean Bean was born on April 17, 1959, in Sheffield, England. After graduation he began appearing in London theater productions, on television and in movies.