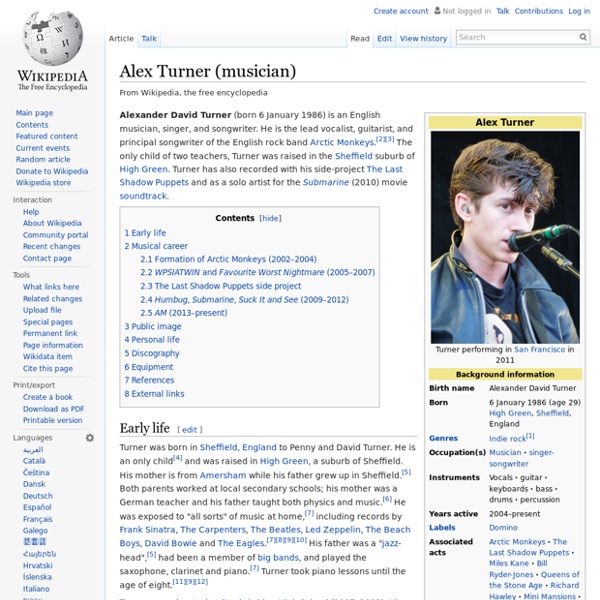 Turner was born in Sheffield, England to Penny and David Turner. He is an only child[4] and was raised in High Green, a suburb of Sheffield. His mother is from Amersham while his father grew up in Sheffield.[5] Both parents worked at local secondary schools; his mother was a German teacher and his father taught both physics and music.[6] He was exposed to "all sorts" of music at home,[7] including records by Frank Sinatra, The Carpenters, The Beatles, Led Zeppelin, The Beach Boys, David Bowie and The Eagles.[7][8][9][10] His father was a "jazz-head",[5] had been a member of big bands, and played the saxophone, clarinet and piano.[7] Turner took piano lessons until the age of eight.[11][9][12] Also in the summer of 2003, Turner played seven gigs in York and Liverpool as a rhythm guitarist for the funk band Judan Suki, after meeting the lead singer Jon McClure on a bus. The experience made him "more confident. John is a very confident character Solo Extended plays Other Arctic Monkeys

Sean Bean - Biography TalkTalk have created this exclusive biography of Sean Bean - we believe it to be the most comprehensive on the web Personal details Name: Sean BeanBorn: 17 April 1959 (Age: 56)Where: Sheffield, EnglandHeight: 5' 11"Awards: No Major Awards Biography: One of the strangest and most frightening things we can do is stop and consider how we got where we are. He was born Shawn Mark Bean on the 17th of April, 1959, in Sheffield. For a while after the accident, Sean couldn't walk properly - a very bad thing as all he wanted was to play football for his local heroes Sheffield United (not that having one leg necessarily disqualifies you from their First Team, you understand). Sometimes there would be trouble. At 15, Sean made a decision to channel his aggression more positively. Meanwhile, in 1975 and aged 16, he left school, armed with only two O-Levels (in Art and English - subjects in which, for some reason, he naturally excelled, and which would both serve him well). 1983 saw Sean on his way.

Arctic Monkeys Q&A With Frontman Alex Turner In 2014, America finally went ape for Arctic Monkeys. At home, in England, where all five of their albums have topped the charts, the four lads from Sheffield have been revered as saviors of indie rock from practically the second they picked up guitars. But it has taken eight years for the Monkeys to finally reach headliner status on this side of the pond. The band’s 2013 album, 'AM', reached No. 6 on the Billboard 200, its highest charting yet, and single “Do I Wanna Know?” gave the group its first Billboard Hot 100 hit, peaking at No. 70 on March 8. 'AM' has already given you your highest-charting album and single, and now “Snap Out of It” is making waves. No. You’ve been topping the charts in the U.K. for years. We’ve been knocking on the door a while. There’s only a handful of songs from your first two albums that make it into the setlist now. Well, it certainly feels like were doing a cover version to some extent. Which ones, for example? Lollapalooza will be mental. Not really.

The Compleat Sean Bean new girlfriend Sean Bean - The Mighty Bean - The Mighty Bean Had problem gaining roles because of typecasting 10 Things you probably didn't know about Sean Bean From 1998 to 2008 Sean Bean played Napoleonic soldier Richard Sharpe in 16 episodes of the television series Sharpe, based on Bernard Cornwell’s best-selling novels. Now, in the two part HISTORY series, Sean Bean on Waterloo, the actor draws on actual eye-witness accounts of soldiers who fought in the battle to tell the story of the dramatic events of 18 June 1815. While Sean is busy providing us with gripping information about Waterloo, perhaps we should take a moment to familiarise ourselves with some interesting little known facts about the man himself. 10. Sean Bean was considered for the role of John Smith in Disney's 1995 film Pocohontas but lost out to Mel Gibson. 9. 8. 7. 6. 5. 4. 3. 2. 1. "I went back to Nic Cage's house, and we'd had a few drinks, we were playing pool and he accidentally knocked over his prehistoric cave bear skull and smashed it. John Reppion