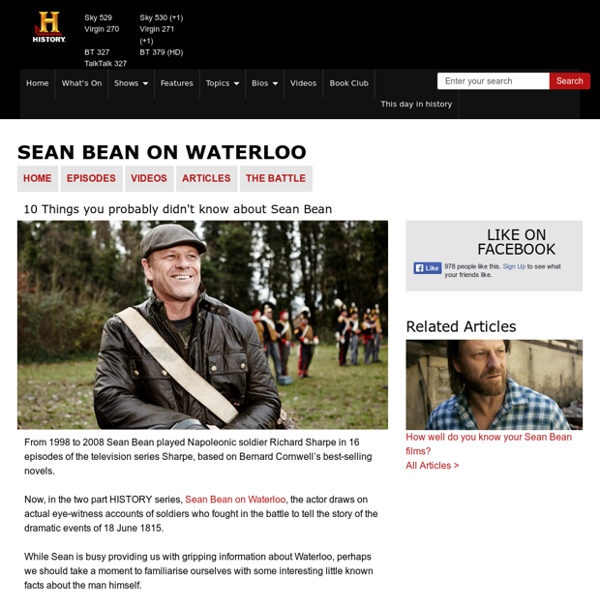 From 1998 to 2008 Sean Bean played Napoleonic soldier Richard Sharpe in 16 episodes of the television series Sharpe, based on Bernard Cornwell’s best-selling novels. Now, in the two part HISTORY series, Sean Bean on Waterloo, the actor draws on actual eye-witness accounts of soldiers who fought in the battle to tell the story of the dramatic events of 18 June 1815. While Sean is busy providing us with gripping information about Waterloo, perhaps we should take a moment to familiarise ourselves with some interesting little known facts about the man himself. 10. Sean Bean was considered for the role of John Smith in Disney's 1995 film Pocohontas but lost out to Mel Gibson. 9. 8. 7. 6. 5. 4. 3. 2. 1. "I went back to Nic Cage's house, and we'd had a few drinks, we were playing pool and he accidentally knocked over his prehistoric cave bear skull and smashed it. John Reppion

Sean Bean - Film Actor, Theater Actor, Television Actor Actor Sean Bean played the villains in Patriot Games and GoldenEye. More recently, he played Boromir in the Lord of the Rings trilogy and Odysseus in Troy. Synopsis Sean Bean was born on April 17, 1959, in Sheffield, England. After graduation he began appearing in London theater productions, on television and in movies. In America, he developed a reputation for playing bad guys, like an IRA terrorist opposite Harrison Ford in Patriot Games and a double agent in Golden Eye. Sean Bean Early life[edit] Bean was born in Handsworth, a suburb of Sheffield, which was then part of West Riding of Yorkshire (the County of South Yorkshire was created in 1974). He is the son of Rita (née Tuckwood) and Brian Bean.[3] He has a younger sister named Lorraine. His father owned a fabrication shop which employed 50 people, including Bean's mother, who worked as a secretary. Despite becoming relatively wealthy (his father owned a Rolls-Royce Silver Shadow), the family never moved away from the council estate as they preferred to remain close to friends and family.[4] As a child, Bean smashed a glass door during an argument, which left a piece of glass embedded in his leg that briefly impeded his walking and left a large scar.[3] This prevented him from pursuing his dream of playing football professionally.

Famous family trees: Sean Bean 22 July, 2013 Welcome to the latest blog in our ‘famous family trees’ series. In this blog series, experienced family historian, Roy Stockdill, investigates the family histories of the famous, both living and dead. Sean Bean is the subject of Roy’s powers of deduction this month. Sean Bean - Biography TalkTalk have created this exclusive biography of Sean Bean - we believe it to be the most comprehensive on the web Personal details Name: Sean BeanBorn: 17 April 1959 (Age: 56)Where: Sheffield, EnglandHeight: 5' 11"Awards: No Major Awards

Sean Bean with fiancée Ashley Moore at the IFTAs By Sharnaz Shahid and Bethany Minelle For Mailonline Published: 00:42 GMT, 25 May 2015 | Updated: 09:34 GMT, 25 May 2015 He has kept his latest relationship on the down low, maintaining a strong desire to keep the romance private. But on Sunday evening, Sean Bean put on a rare public display of affection with fiancée Ashley Moore at the prestigious Irish Film and Television Academy (IFTA) Awards in Dublin.

Alex Turner: I have nightmares before big shows Speaking to Radio X’s Danielle Perry about the shows, Turner confirmed that although nerves don’t shake him, nightmares do. “I sometimes have nightmares before big shows… like we’ll be playing a show and the field will empty” he said. "One of the reasons stuff starts going wrong in them dreams is because I’ll walk on stage and it’s not my set-up. "I’ll be trying to figure it out while the field’s emptying… Before Glastonbury, years ago, I had a dream like that and I was screaming at the guitar-tech like 'Why now? Why did you pick now?'" Turner and drummer Matt Helders were in Radio X to record a special acoustic set, just for us.

Biography Born: 17 April 1959Where: Sheffield, EnglandAwards: No Major AwardsHeight: 5' 11" The second from left, top row is Sean. One of the strangest and most frightening things we can do is stop and consider how we got where we are. How far our lives are from what we expected, and from what was expected for us. Imagine what it must be like for Sean Bean.