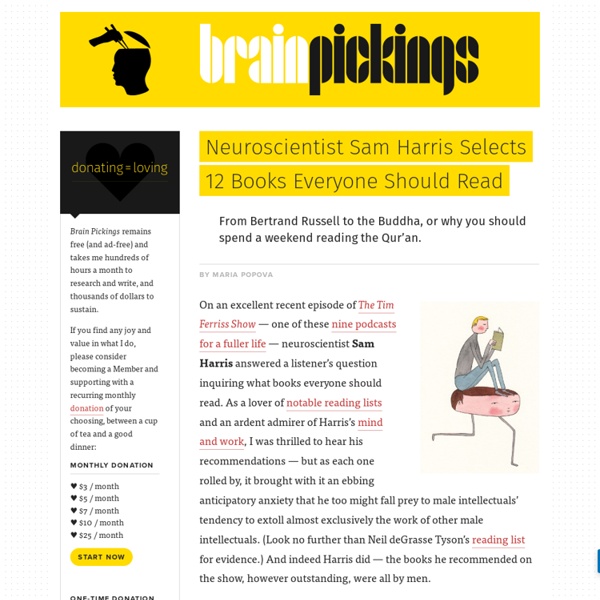 By Maria Popova On an excellent recent episode of The Tim Ferriss Show — one of these nine podcasts for a fuller life — neuroscientist Sam Harris answered a listener’s question inquiring what books everyone should read. As a lover of notable reading lists and an ardent admirer of Harris’s mind and work, I was thrilled to hear his recommendations — but as each one rolled by, it brought with it an ebbing anticipatory anxiety that he too might fall prey to male intellectuals’ tendency to extoll almost exclusively the work of other male intellectuals. (Look no further than Neil deGrasse Tyson’s reading list for evidence.) And indeed Harris did — the books he recommended on the show, however outstanding, were all by men. Complement with the reading lists of Joan Didion, Susan Sontag, Carl Sagan, and Alan Turing, then revisit Harris on the paradox of meditation and subscribe to The Tim Ferriss Show here. Top illustration by Marc Johns

The Significance of Mauni Amavasya - Silence is the Way January 27, 2017 is Mauni Amavasya, the last Amavasya before Mahashivratri. Sadhguru looks at the significance of silence and the importance of this period in the year. Read in Hindi: मौनी अमावस्या Sadhguru: The existence that one is able to see, hear, smell, taste, and touch through the five senses is essentially a product of reverberations, a play of sound or nada. The body and mind of a human being are also reverberations. The fascinating explanations behind six classic magic tricks The skill of a magician lies in his or her ability to keep you frozen in expectation of their next unbelievable trick. It often seems that magicians really are capable of doing things which defy all known laws of the universe, and the atmosphere of awe they create during their performances helps further reduce any doubts you have that this is all a trick. Here, Bright Side takes a look at six of the most famous magic tricks that have amazed people over the years and takes a look at them from a new, more scientific angle to reveal that they are not all that they seem.

Brian Eno’s Reading List of Twenty Books Essential for Sustaining Human Civilization By Maria Popova UPDATE: The folks from the Long Now have kindly asked me to contribute to the Manual for Civilization library — here is my own reading list. There is something inescapably alluring about the reading lists of cultural icons, perhaps because in recognizing that creativity is combinatorial and fueled by networked knowledge, we intuitively long to emulate the greatness of an admired mind by replicating the bits and pieces, in this case the ideas found in beloved books, that went into constructing it. After the reading lists of Carl Sagan, Alan Turing, Nick Cave, and David Bowie, now comes one from Brian Eno — pioneering musician, wise diarist, oblique strategist of creativity — compiled for the Long Now Foundation’s Manual for Civilization, a collaboratively curated library for long-term thinking.

The Best Children’s Books of 2016 In his meditation on the three ways of writing for children and the key to authenticity in all writing, C.S. Lewis admonished against treating children, in literature or life, as “a strange species whose habits you have ‘made up’ like an anthropologist or a commercial traveller.” J.R.R. Tolkien expressed the same sentiment in his timeless insistence on why there is no such thing as writing “for children.” And a generation later, Maurice Sendak, perhaps the most beloved creator of so-called “children’s” books in our own era, scoffed in his final interview: “I don’t write for children. I write — and somebody says, ‘That’s for children!’” 13 Common Leadership Styles (and When to Use Them) A leadership style refers to a leader's characteristic behaviors when directing, motivating, guiding and managing groups of people. Great leaders can inspire political movements and social change. They can also motivate others to perform, create and innovate. As you start to consider some of the people who you think of as great leaders, you can immediately see that there are often vast differences in how each person leads. Fortunately, researchers have developed different theories and frameworks that allow us to better identify and understand these different leadership styles.

25 Essential Books That Every College Student Should Read There is no college student who would like reading books, they say. Can you believe it? We hardly think so! Yes, reading is fashionable. Dr. Andrew Shugyo Daijo Bonnici I am a teacher and trainer in Applied Meditation Therapy®, a counselor in the embodiment of Visceral Core Intelligence, a practicing Zen Buddhist Roshi, and a spiritual mentor in the embodiment of Faith & Transpersonal intimacy. I am also an internationally published author on Zen Meditation & the practice of living enlightenment right here and now. I have been married for 45 years and have been blessed with two wonderful sons, two gracious daughter-in-laws, and four precious grandchildren. I am deeply grateful that both my sons requested that I officiate at their weddings. Next to the joy of marrying my wife, conducting their marriage ceremonies was another deeply precious and fulfilling part of my life. A few weeks after my marriage in 1966 I was in a very serious motorcycle accident.

Power Poses Co-author: I Don't Think Power Poses Are Real It would be hard to come up with a recent psychological idea that has stormed the mainstream more quickly and effectively than “power posing” — the idea that if you adopt assertive, “powerful” poses it can have various positive psychological and physiological effects that may help you during negotiations, public speaking, and other high-pressure situations. The idea comes from a 2010 paper published in Psychological Science co-authored by Dana Carney and Andy Yap, then of Columbia University, and Amy Cuddy of Harvard. The trio reported some intriguing results: When they had a group of students briefly adopt “high-power” poses — imagine the body language of a dominant boss — those students had higher levels of testosterone (associated with dominance and assertiveness), lower levels of cortisol (the stress hormone), and were more likely to take risks in a gambling task, as compared to those who adopted meeker body language. Those in the power-posing group also felt more powerful.