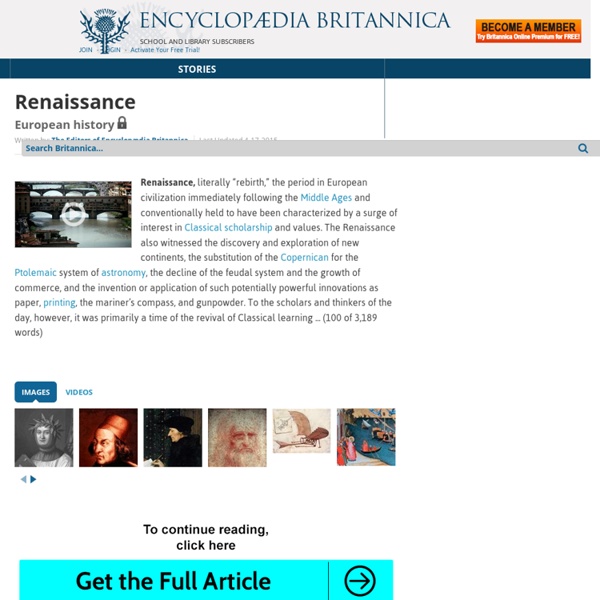 Renaissance Art - Facts & Summary By the end of the 15th century, Rome had displaced Florence as the principal center of Renaissance art, reaching a high point under the powerful and ambitious Pope Leo X (a son of Lorenzo de’ Medici). Three great masters–Leonardo da Vinci, Michelangelo and Raphael–dominated the period known as the High Renaissance, which lasted roughly from the early 1490s until the sack of Rome by the troops of the Holy Roman Emperor Charles V of Spain in 1527. Leonardo (1452-1519) was the ultimate “Renaissance man” for the breadth of his intellect, interest and talent and his expression of humanist and classical values. Leonardo’s best-known works, including the “Mona Lisa” (1503-05), “The Virgin of the Rocks” (1485) and the fresco “The Last Supper” (1495-98), showcase his unparalleled ability to portray light and shadow, as well as the physical relationship between figures–humans, animals and objects alike–and the landscape around them.

Johannes Gutenberg - Inventor German inventor Johannes Gutenberg developed a method of movable type and used it to create one of the Western world's first major printed books, the “Forty-Two-Line” Bible. Synopsis Johannes Gutenberg was born circa 1395, in Mainz, Germany. He started experimenting with printing by 1438. In 1450 Gutenberg obtained backing from the financier, Johann Fust, whose impatience and other factors led to Gutenberg's loss of his establishment to Fust several years later. Gutenberg's masterpiece, and the first book ever printed in Europe from movable type, is the “Forty-Two-Line” Bible, completed no later than 1455. Early Life Born into a modest merchant family in Mainz, Germany, circa 1395, Johannes Gutenberg’s work as an inventor and printer would have a major impact on communication and learning worldwide. Experiments in Printing Financial Trouble In 1448, Johannes Gutenberg moved back to Mainz and by 1450 was operating a print shop. Later Life Related Videos

Reformation | Christianity Reformation, Britannica Classic: The Reformation: Age of RevoltEncyclopædia Britannica, Inc.the religious revolution that took place in the Western church in the 16th century. Its greatest leaders undoubtedly were Martin Luther and John Calvin. The world of the late medieval Roman Catholic Church from which the 16th-century reformers emerged was a complex one. The Reformation of the 16th century was not unprecedented. Martin Luther claimed that what distinguished him from previous reformers was that while they attacked corruption in the life of the church, he went to the theological root of the problem—the perversion of the church’s doctrine of redemption and grace. The Reformation movement within Germany diversified almost immediately, and other reform impulses arose independently of Luther. The Reformation spread to other European countries over the course of the 16th century.

Volume D: The Romantic Period | The Norton Anthology of English Literature, Ninth Edition: W. W. Norton StudySpace Volume D The Romantic Period 1785–1832 (NAEL Vol. D) The Romantic period is short, relative to other literary periods, but is still quite complex. Revolution and Reaction England at this time was transforming from a primarily agricultural nation to one focused on manufacture, trade, and industry. The New Poetries: Theory and Practice “The Romantics” did not actually identify themselves as such. Writing in the Marketplace and the Law Courts The number of people who could read, and who wanted to read, grew dramatically during the Romantic period, particularly among those of the lower and middle classes. Other Literary Forms Although the Romantic period centered primarily on poetry, many other literary forms flourished as well, including political pamphlets, reviews, drama, and novels.

Lecture 16: The Romantic Era The categories which it has become customary to use in distinguishing and classifying "movements" in literature or philosophy and in describing the nature of the significant transitions which have taken place in taste and in opinion, are far too rough, crude, undiscriminating -- and none of them so hopelessly as the category "Romantic." ---Arthur O. Lovejoy, "On the Discriminations of Romanticisms" (1924) Ask anyone on the street: "what is Romanticism?" These meanings cause few problems in every day life -- indeed, few of us wonder about the meaning of Romanticism at all. The expression Romantic gained currency during its own time, roughly 1780-1850. ROMANTICISM appeared in conflict with the Enlightenment. The philosophes were too objective -- they chose to see human nature as something uniform. Like one of their intellectual fathers, Jean Jacques Rousseau (1712-1778), the Romantics yearned to reclaim human freedom. The period from 1793 to 1815 was a period of European war.

The Culture of Rebellion in the Romantic Era Eugene Delacroix, Liberty Leading the People, 1830. One of Delacroix’s best known works, the painting depicts a bare-breasted Liberty leading Parisians of mixed social and economic backgrounds into battle. The Romantic era is typically noted for its intense political, social, and cultural upheavals. Initially attracted to the Enlightenment precepts of universal equality and the dissolution of absolute monarchy in favor of democratic government, many authors of the Romantic period, such as William Wordsworth, Samuel Taylor Coleridge, and Robert Southey, sympathized with the French Revolution. One key area in which the influence of the French Revolution manifests itself is in the satiric poetry of the period. Shannon Heath Select Bibliography Dyer, Gary. Pakenham, Thomas. Stauffer, Andrew.

Romanticism If the Enlightenment was a movement which started among a tiny elite and slowly spread to make its influence felt throughout society, Romanticism was more widespread both in its origins and influence. No other intellectual/artistic movement has had comparable variety, reach, and staying power since the end of the Middle Ages. Beginning in Germany and England in the 1770s, by the 1820s it had swept through Europe, conquering at last even its most stubborn foe, the French. It traveled quickly to the Western Hemisphere, and in its musical form has triumphed around the globe, so that from London to Boston to Mexico City to Tokyo to Vladivostok to Oslo, the most popular orchestral music in the world is that of the romantic era. After almost a century of being attacked by the academic and professional world of Western formal concert music, the style has reasserted itself as neoromanticism in the concert halls. Origins: Folklore and Popular Art Nationalism Shakespeare The Gothic Romance Medievalism

Notes on the Romantic Age The Romantic Age Important themes The Romantic Movement of the early 19th was a reaction to many cultural, social and political developments. Many artists and thinkers began to see developments in society threatening individualism: the factory system made human beings replaceable parts in a system, and mass political movements (like the French Revolution) diminished individual accomplishment. Similarly, increased urbanization made people feel cut off nature. Also, Neoclassicism's strict rules and formalism began to seem limiting. In reaction, the Romantic Movement stressed the individuality of the artist's expression, a personal relationship with nature, and a trust in emotion and subjective experience. Important philosophical figures: Immanuel Kant (1724-1804): Kant is not a Romantic philosopher, but his ideas, especially his Pure Critique of Reason, influenced many Romantic thinkers.

Romancticism - Literature Periods & Movements Literature Network » Literary Periods » Romancticism No other period in English literature displays more variety in style, theme, and content than the Romantic Movement of the eighteenth and nineteenth centuries. Furthermore, no period has been the topic of so much disagreement and confusion over its defining principles and aesthetics. Romanticism, then, can best be described as a large network of sometimes competing philosophies, agendas, and points of interest. In England, Romanticism had its greatest influence from the end of the eighteenth century up through about 1870. Its primary vehicle of expression was in poetry, although novelists adopted many of the same themes. First and foremost, Romanticism is concerned with the individual more than with society. On the formal level, Romanticism witnessed a steady loosening of the rules of artistic expression that were pervasive during earlier times. The master of symbolism in American literature was Nathaniel Hawthorne.

A Brief Guide to Romanticism “In spite of difference of soil and climate, of language and manners, of laws and customs, in spite of things silently gone out of mind and things violently destroyed, the Poet binds together by passion and knowledge the vast empire of human society, as it is spread over the whole earth, and over all time. The objects of the Poet’s thoughts are everywhere; though the eyes and senses of man are, it is true, his favorite guides, yet he will follow wheresoever he can find an atmosphere of sensation in which to move his wings. Poetry is the first and last of all knowledge—it is as immortal as the heart of man.” Romanticism was arguably the largest artistic movement of the late 1700s. Romantic poets cultivated individualism, reverence for the natural world, idealism, physical and emotional passion, and an interest in the mystic and supernatural. Romantic ideals never died out in poetry, but were largely absorbed into the precepts of many other movements. browse poets from this movement