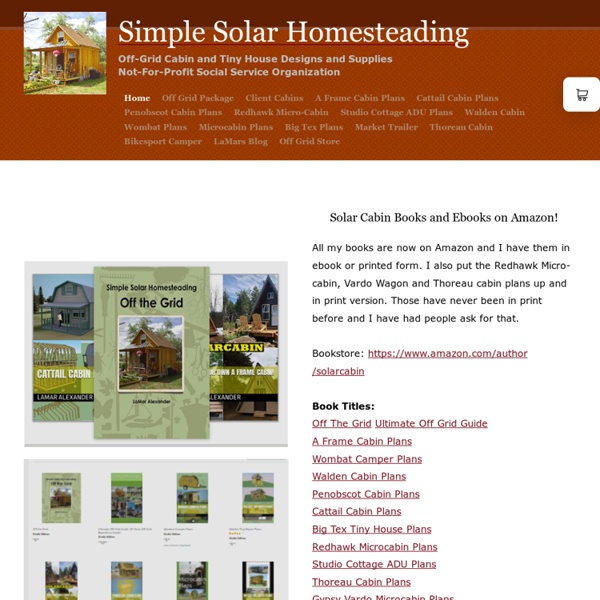 My older books and ebooks are still available!ailable: Individual printable plans from the 'Off the Grid' book click here: Planswant just specific If you prefer to order by cash contact me at lamar5292 @ yahoo.com My little cabin in the woods The cabin is 14 x 14 and approximately 400 square feet with a full loft.

Bare-bones tiny house with glass wall perches on stilts Another day, another minimalist nature dwelling—this time it’s perched on stilts in northern Vietnam. Designed by architect Chu Văn Đông, Forest House, as it’s aptly called, asserts itself from the side of a small edge and is propped up on stilts. Its construction is as simple as can be: a single room with a gable roof and clad in wood, with a built-in bench that doubles as a bed, a small wood-burning stove, and a table ledge. Sheds and Portable Buildings for Sale in Kansas City Main Navigation Sheds and Portable Buildings for Sale in Kansas City Click a Shed or Portable Building for available sizes and pricing. Sheds and Portable buildings delivered... it's THAT easy!We offer many designs, each in various sizes, and something for nearly every budget.

Building a House on Limited Means: Low-cost House-Building For People on a Budget Building a House on Limited MeansThe Elimination of all that is unnecessary to achieve a DreamBy Thomas J. Elpel We are very goal-oriented in Western culture, and we often count our successes by how much we accomplish. Eastern cultures can be very goal-oriented as well, but sometimes with a very different approach. While a westerner sits on his laurels at the end of the day and adds up what he did, an easterner might sit on his laurels and add up what he eliminated having to do. As a simple analogy, you might say that a western artist does sculpture with clay, assembling an entire work piece by piece, while an eastern artist does sculpture in stone, eliminating everything that is not part of the final goal.

rainwater harvesting There’s a lot of advice floating around the internets about how to make a rain barrel. Most barrel pundits suggest drilling a hole in the bottom of a barrel and installing a faucet, a kind of connection called a “bulkhead fitting”. Unfortunately such improvised fittings have a tendency to leak. Tiny house with flexible interior sleeps up to six The Cape Cod tiny house is based on a triple-axle trailer and clad in tongue and groove cedar, with metal accenting. It measures 10 ft (3 m) wide, which exceeds the standard towing limit in the US, so it'll need a permit to go on the road, though the home won't be moved around too often. On entering, visitors are presented with a small lounge area with home entertainment center and some space for a couch.

Build a Home for $10,000 in 10 Days! For half a century, William Castle has been building bridges, cabins, and shanties of all shapes and sizes. His favorite projects are right in his own yard. Woodland areas such as that of his native Belmont, N.Y., often have an abundance of “junk” timber that has little commercial value because of its small diameter, twisted grain, or other imperfections. Videos Right out of the gate I was enamored with the aesthetic; it evokes movies like Tron and WarGames which – whether they hold up now or not – were seen in the brain-like-a-sponge days of my childhood and, as a result, a welcome flutter of warm nostalgia cascaded through my brain. About a minute in though my interest started to wane; when were things going to pick up? I was a bit bored and having trouble understanding what this whole thing was about but, since Max made it, I stayed locked in (and am glad I did).

Foraging It’s acorn season in Southern California. I’ve long been interested in acorns, knowing that they were the staple food of the native people who lived here, and I’ve gathered and processed them before. However, once I have the acorn meal, I’ve never known exactly what to do with it. It’s highly nutritious, but I thought (wrongly!) aVOID - Minimalist tiny house is an ever-transforming living experience (Video) The tiny house movement has evolved dramatically since its early days, when a saccharine-sweet, rustic aesthetic was de rigeur, and floorplans were relatively simple. Now, things are getting interesting in the tiny house world, with a variety of styles, configurations and price points to choose from -- or at least oogle at. Combining a modern sensibility with transformer-furniture magic and tiny house portability is this striking tiny design by young Italian architect Leonardo Di Chiara. Feeling like a hyper-efficient, minimalist micro-home on wheels, we get an extensive tour of the aVOID house via the excellent Fair Companies. It's a must-watch:

Bomb Shelters - Reviews of Bomb Fallout Shelters The bomb shelter business is booming. At least that's the consensus of the men and women who design, construct and install underground sanctuaries. They attribute the growth in business to Kim Jong Il's erratic missile lobbing, the intransigent Iranian clerics hell-bent on getting nuclear weaponry, the impending total collapse of the global financial system, and the end of the world in 2012, as predicted by the Mayan Calendar. "For whatever reason—and we're not totally sure ourselves—but business is incredible," Brian V. Camden, an engineer at high-end shelter builder Hardened Stuctures, says.

Toltec Active Dreaming Technique, from Cry of the Eagle by Theun Mares. Reprinted by permission of Charles Mitchley Lionheart Publishing Email: charles@lionheartpublishing.com Web site: www.lionheartpublishing.com It is quite impossible to practise active dreaming when the physical body is tense and uncomfortable; therefore, the very first prerequisite in setting up dreaming is to cultivate the ability to achieve complete relaxation at will in the chosen moment. We term this state of relaxation, deep relaxation, and in the final analysis it is nothing more than a conditioned reflex.

Building StrawBale Houses Strawbale houses are cheap, easy to build and can be put up in a relatively short period of time. Strawbale houses are usually made by stacking rows of straw bales with a moisture barrier between the bales and the supporting platform. Building with bales of straw has become very popular and can be seen in many areas of the Southwestern United States. Straw is a renewable building material and is a great insulator from the elements. Strawbale Homes Couple adapted their THOW for baby Those who are skeptical about tiny house living often point to the potential challenges of having kids when it comes to living in such a small space. While it's true that living tiny isn't for everyone, there are intrepid people who do enjoy it, and yes, there are even those who do it with a child (or two, or three). Samantha and Robert of Shedsistence are one couple that took the plunge into tiny living a couple of years ago, by designing and constructing their own small dream home. They've since welcomed a baby daughter into their modern 204-square-foot abode, and have made some modifications to make their space more baby-friendly.