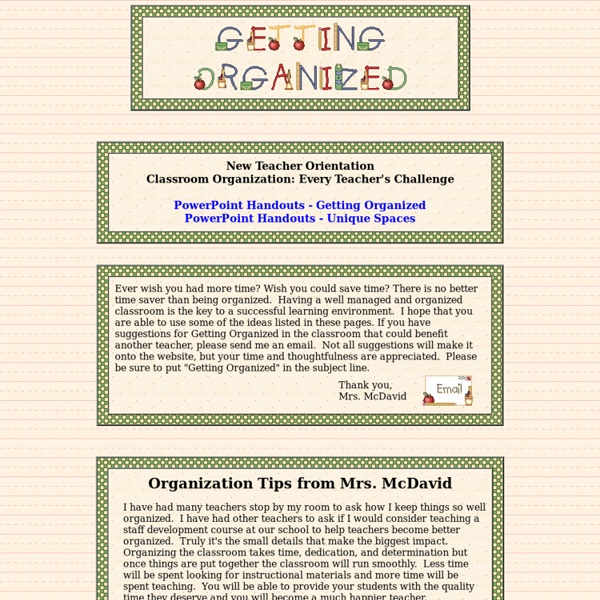 Organization Tips from Mrs. McDavid I have had many teachers stop by my room to ask how I keep things so well organized. I have had other teachers to ask if I would consider teaching a staff development course at our school to help teachers become better organized. Truly it's the small details that make the biggest impact. Organizing the classroom takes time, dedication, and determination but once things are put together the classroom will run smoothly. Materials You Will Need ~ Back to the Top ~ Purge Unused Materials and Non Essential ItemsAs teachers we tend to hoard materials and supplies that we think might come in handy one day. Organizing the Teacher's DeskThe teacher's desk can become a dumping ground for paperwork, papers that need to be filed, correspondence from the main office, items that need to be read or evaluated, and papers that need to be held for future reference. The next step is designating an area to file your paperwork. I use two different To Do Lists.

Mrs. Brosseau's Binder: How Google Forms Saved This Teacher's Sanity I’m writing this tutorial as I sit at my kitchen island, eating a scone and drinking a coffee. I know what you’re thinking – this teacher has time to sit down?! Oh yeah, sit, eat and have a coffee. Here’s my secret. I’m an idealist. “Be careful not to use first person when writing a lab report.” x 5 “How could you rephrase your headline to catch the reader’s attention?” “Refer back to the success criteria to be sure you are meeting all of the expectations.” x infinity My hands were sore and I was tired. I was bringing home so many projects to mark because they just took so long to mark I couldn’t get them all done at school. I played with trying to solve this problem with some programming in Excel, and debated getting out my old programming books, but the answer was much more obvious: Google Forms. If I could put all the typical feedback comments into a Google Form I could just check the ones that apply to the student’s work. Now we need to set up docAppender. There you have it!

What makes an interactive whiteboard interactive? I was recently asked by a principal how he could tell during classroom visits if a teacher was using the Smartboard "effectively." A pretty good question. While popular (2007, 2010, interactive white boards (IWBs) are controversial even (or especially) among technology enthusiasts. The major complaint is that the use of these devices reinforces the "sage on the stage" teaching methodology. "The IWB is little more than a fancy overhead projector and its touch sensitive screen is only used to save the teacher a couple steps back to the computer to change a slide." seems to be sentiment in the constructivist camp of techno-pundits. But many advocates of this technology (myself included), see IWBs as genuine means of bringing more interactivity, more student-focus into classrooms of traditional teachers. What we don't want to forget is that someone who is coaching a teacher is not really looking for "good technology use" but for just good educational practices.

50 Of The Best Podcasts For High School Students - 50 Of The Best Podcasts For High School Students by Dennis Lee, StudyPug.com This post is the first part to a 3-part series entitled “250 things any high school student must learn”. High school is perhaps one of the biggest turning points of a person’s life. So while you’re all in the stage where you go wonder what you really want to be like in the years to come, why not try listening to Podcasts to give yourself some insights about life. So here’s a collection of 50 Podcasts that any high school student should listen to, categorized into the four general topics would help you focus on what you might choose to become in the years to come. Academic Related Podcasts Not everyone can be a History Buff, a Grammar Nazi, a Science Geek, or a Poetry enthusiast, but a person could try listening to one of these podcasts to have a bit more of new things learned from among every classes like Science, Math, English, History and Literature. General and Special Interest Podcasts Entrepreneurship

10 Ways to be a Terrible Teacher Teaching is a noble calling. That is why when a teacher doesn't behave nobly it breaks trust and we get upset. I have to admit that I've had days as a "TT" (Terrible Teacher.) If we're honest with ourselves, we all have. So, today, I'll share a few of the things I think make a teacher terrible. Stop and Be Excellent Some of you will be shocked that I've taken my positive tone out of this post. Sometimes knowing what to do means we also know what NOT to do. 10- The teacher is always on their cell phone. 9 - The teacher is always on the computer or not paying attention. I knew a teacher who used to sew on her sewing machine during class. 8- The teacher is always losing his/her temper or is predictably dramatic. The predictably dramatic could be when you get soooooooo mad you jump on your desk. 7- The Teacher shares private student information publicly NEVER call grades out loud - even for the top students. Let me tell you something. 2- The Teacher whose words mean nothing.

The British Burn Washington, 1814 The British Burn Washington, DC, 1814 August of 1814 was one of the hottest in the memory of the approximately 8,000 residents of America's new capital. The sweltering, humid heat turned the stagnate marshes surrounding the city into thriving hatcheries for disease-carrying mosquitoes. To make matters worse, the city found itself the target of an invading British army slowly making its way from the Chesapeake Bay. America had been at war with the British Empire since 1812, but the action so far had consisted of a series of indeterminate skirmishes along the Great Lakes region. As the British army of approximately 4,000 approached, the majority of Washington residents fled the city. That evening, the vanguard of the British army reached Capitol Hill and began its systematic destruction of all public buildings in the city. George Gleig was part of the British force that attacked and burned Washington. ...When the detachment sent out to destroy Mr.

Lärandematriser; synliggör lärandet i handling 20 Ways to Create a Healthy Faculty Environment In honor of Edutopia's 20th anniversary, we're producing a series of Top 20 lists, from the practical to the sublime. When a classroom "works" it is a powerful place to be. While the students ultimately make these moments, talented educators need to set the stage for success. The same can be said of harmonious faculty and staff relations. A building full of talented people does not guarantee a comfortable place to grow as an educator. In honor of Edutopia's 20th anniversary, here are 20 ways to cultivate a healthy faculty environment: Faculty Meetings 1. 2. 3. 4. 5. Faculty Lounge 6. 7. 8. Professional Respect 9. 10. 11. 12. 13. Information Technology 14. 15. 16. Beyond Campus 17. 18. 19. 20. What tips do you have for creating a safe place to learn and teach?

Why people fall for dumb Internet hoaxes (Facebook) Last month brought a great deal of fanfare, and accompanying snarky outrage, about a new “Satire” tag on Facebook for content sources like The Onion. Yet fake “news” items — which run deeper than satire — continue to propagate rapidly across the site, as well as on other social media platforms, such as Twitter. In the past few days, huge numbers of Facebook users saw — and shared — a hoax about severe winter weather from Empire News, predicting “record-shattering snowfall coming soon.” Meanwhile, retweets of a “limited edition” Pumpkin Spice-flavored Durex condom image flooded Twitter timelines. Most media coverage has approached this kind of rapid viral proliferation of fake content as a problem of consumer intelligence, an account both inflammatory and ableist. 1. Both the Empire News winter forecast and the Durex Pumpkin Spice condom were easily falsifiable, but they benefited from a general tendency among social media users to share without reading, let alone verifying.

Building A Better Mousetrap: The Rubric Debate Building A Better Mousetrap: The Rubric Debate by Madeline Marcotte The origin of the term “rubric” (roo´ brik) gives us our first clue as to why educators often argue over the use of this assessment tool. Because the headings, titles, and sections of early books were often printed in red and, in prayer books, the directions for conducting religious services were also printed in red, “rubric,” which comes from the Latin for “red” or “reddish,” has evolved to mean “an established custom or rule of procedure.” (Online dictionary) The term was adopted by educators in the 1980s to refer to a set of standards and/or directions for assessing student outcomes and guiding student learning. Well known in elementary and secondary schools as crucial to state-mandated student performance assessment, rubrics are now used similarly by post-secondary educators in all disciplines to assess outcomes in learning situations that require critical thinking and are multidimensional. It’s the design Rubrics 101

improve student presentation skills October 10, 2011 By: Lora Helvie-Mason, Ed.D in Effective Teaching Strategies Do you find that students often struggle to put together effective oral presentations? To help students, try this activity as a way to provide feedback before the big speaking day. Using the four corners of the classroom, each student delivers his or her presentation to a small group, receives individual feedback, and then rotates within that group from speaker to audience member. Here’s how to structure the four corners: Preparation: You will want to schedule this activity at least a week before the presentation is due. Activity: Next, divide the students into four groups (a group for each corner). The instructor: The instructor moves around the room; stopping to listen in on each of the four groups and offer feedback. The audience: Depending on how structured you want the activity, you can give the audience a list of criteria to look for or even assign each student to a specific role.