Getting Started with Three.js 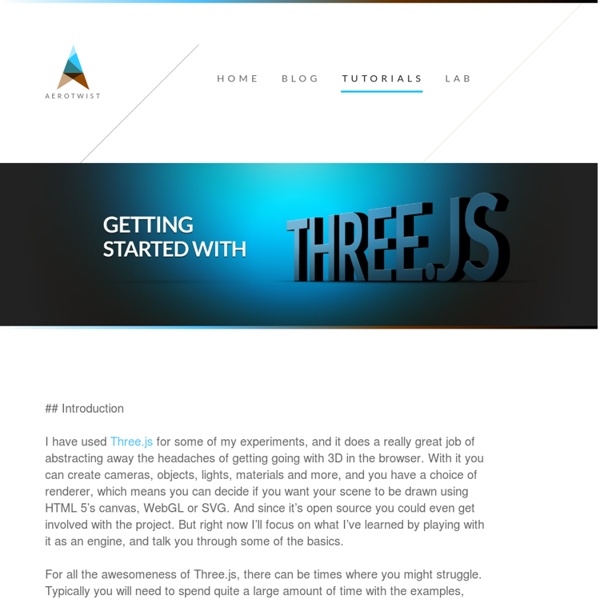 ## Introduction I have used Three.js for some of my experiments, and it does a really great job of abstracting away the headaches of getting going with 3D in the browser. With it you can create cameras, objects, lights, materials and more, and you have a choice of renderer, which means you can decide if you want your scene to be drawn using HTML 5’s canvas, WebGL or SVG. And since it’s open source you could even get involved with the project. But right now I’ll focus on what I’ve learned by playing with it as an engine, and talk you through some of the basics. For all the awesomeness of Three.js, there can be times where you might struggle. The basics I will assume that you have at least a passing knowledge of 3D, and reasonable proficiency with JavaScript. In our 3D world we will have some of the following, which I will guide you through the process of creating: A scene A renderer A camera An object or two (with materials) Support Just a quick note on support in the browsers. Set the Scene

jQuery Mouseover Effect Using Parallax Style Tutorial The power of jQuery is enormous, so in this tutorial we are going to show you in a very creative way using parallax style with jquery mouse over effect. On mouse over a parallax, animation image layer are response to the mouse travelling the whole width of the mouse port, the position of image move depend on css style that we have defined in different style in example. You may also like my this post:

A Primer on Bézier Curves Preface In order to draw things in 2D, we usually rely on lines, which typically get classified into two categories: straight lines, and curves. The first of these are as easy to draw as they are easy to make a computer draw. Give a computer the first and last point in the line, and BAM! straight line. No questions asked. The Beginner's Guide to three.js In this step-by-step guide, we’re going to create a 3D version of the Treehouse logo using three.js, which is a 3D graphics framework built on top of WebGL. Click and drag your mouse to orbit the camera! You can also use your mousewheel to zoom in and out. See the Demo Download the Code View on CodePen Note: You’ll need the desktop version of either Chrome, Firefox, or Safari. See browser compatibility below.

colony Colony is a neat little visualisation tool for exploring Node projects and their dependencies using d3.js. Each file is represented as a node in the graph. If one file depends on another, a link is made between the two files. Each file is coloured based on the module they belong to. By hovering over a node, you can see the file's name, the files it depends on (light), and the files that depend on it (dark). This demo is a visualisation of colony's own code and dependencies, but you can use the command-line tool to apply it to almost any NPM module or CommonJS project. Welcome to X3DOM — X3DOM 1.4.0 documentation Welcome to X3DOM’s documentation. This documentation is divided into different parts: Guide, Reference and Notes. We recommend that you read the Getting started section of the Guide first. Besides the getting started there is also a more detailed First steps with X3DOM tutorial that shows how to create complete (albeit small) application. If you’d rather dive into the internals of X3DOM, check out the API documentation.

Equal Height Blocks in Rows There are plenty of solutions for equal height columns using jQuery (like this one by Rob Glazebrook). The basic idea is to measure all of their heights and then set all their heights to that of the tallest one. But what if there is multiple rows of blocks and you only want to increase the heights to match in the current row? This could happen from having different sized thumbnails or different amounts of text in each box. Stephen Akins posted a neat idea on how to solve this. The idea is largely the same, test the heights of divs and set them to the tallest, but before it does that it measures the top position. Cubism.js Time Series Visualization foo7.6 bar−6.2 foo + bar1.4

easylearntutorial Learn how to develop your own games for the Nintendo Wii U! "The Nintendo Web Framework is a development environment based on WebKit technologies, supporting application development on the Wii U system using HTML5, JavaScript, and CSS. It also supports the Wii U GamePad controller, Wii Remote controllers, and JavaScript extensions such as video playback." Why this video tutorial series? After finished writing book "Learn HTML5 by Creating Fun Games", I came across Nintendo Web Framework program, which I applied for, and eventually got accepted for. Because of a non-disclosure agreement with Nintendo of America (NOA), I can't give out a lot of details about the program or some specifics about the framework itself.