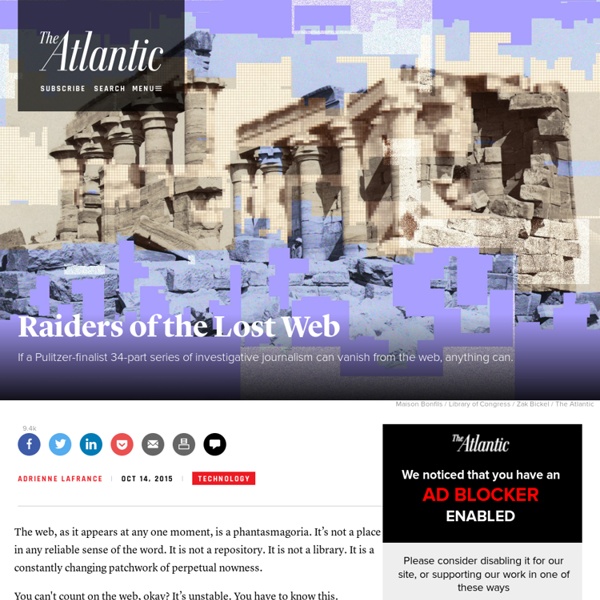 The web, as it appears at any one moment, is a phantasmagoria. It’s not a place in any reliable sense of the word. It is not a repository. It is not a library. It is a constantly changing patchwork of perpetual nowness. You can't count on the web, okay? Digital information itself has all kinds of advantages. There are exceptions. It is not just access to knowledge, but the knowledge itself that’s at stake. The promise of the web is that Alexandria’s library might be resurrected for the modern world. Before the Internet, if you wanted to look up an old newspaper article, you usually had to find it in an archive. “I was spinning my way through December,” Vaughan said, “and I stopped and I saw this headline that said 20 children had been killed in bus-train collision. After college, Vaughan became a reporter himself. By this time it was 1992. Fifteen years, to be exact. Vaughan spent the better part of a year reporting the story. It was worth the effort. “I still think about it.

Haryana’s Decision to Include the Bhagavad Gita in School Curriculum Skews the Idea of Education – The Caravan The next academic session will bring a change in curriculum for school students in Haryana, who will now have to study shlokas from the Bhagavad Gita as part of their syllabus. This move comes shortly after external affairs minister Sushma Swaraj called for the Gita to be declared a national holy book. Prime Minister Narendra Modi presented a copy of the book to US president Barack Obama on his maiden visit to the United States and to Japan’s Emperor Akihito last September. While presenting the book to the emperor in Japan, Modi said, “For gifting I brought a Gita. I do not know what will happen in India after this. There may be a TV debate on this.

How to choose your news - Damon Brown How the media landscape has changed Media visionary Clay Shirky gave a TED Talk on how the media landscape has changed. “The moment we’re living through, the moment our historical generation is living through, is the largest increase in expressive capability in human history.” In other words, the amount of information we are capable of capturing is unprecedented. As a result, we need new techniques to filter through the information and need to work much harder than previous generation to better understand our world.

Talk Of the Town IN 2012, two years before Arun Jaitley became the most important minister in Narendra Modi’s cabinet, the news that the ruling United Progressive Alliance’s allocation of coal blocks may have cost the government thousands of crores and unfairly benefited private interests, incapacitated the parliament’s monsoon session. Bharatiya Janata Party parliamentarians threatened to resign en masse, and Jaitley, then the BJP’s opposition leader in the Rajya Sabha, aggressively spoke out against what he called “the biggest scam in independent India.” As the stymied parliament session ground to a halt that August, Jaitley and Sushma Swaraj, his counterpart in the Lok Sabha, released a fierce joint statement. “We used this session of Parliament to shake the conscience of the people of India,” they wrote. “This is not merely a political battle.

Facebook News Feed: Finally lets you choose which friends' posts to see first. Courtesy of Facebook The big complaint about Facebook* has always been that you can’t control what you see in your News Feed. That is finally beginning to change. Facebook announced a new set of options Thursday that will let you specify, among other things, which friends’ posts you’d like to see at the top of your feed when you open the app or website. So if you want to see the latest updates from your best friend, your spouse, and your worst frenemy before you move on to your lesser acquaintances, that’s your prerogative.

Medium is not a publishing tool — The Story Medium is not a publishing tool Twelve years ago, I was heading Blogger at Google and frustrated we kept losing users to our competitors, like Movable Type from Six Apart. A common phenomenon at the time was that people would start blogging on Blogger — because it was free, popular, and easy to set up — and then “graduate” to more powerful tools. Fairphone 2 hands-on: Modular phones are finally here AMSTERDAM—With more and more similarly priced and specced Android smartphones arriving on the market, unique selling points are becoming increasingly rare. There's nothing bad about selling a decent phone with an attractive price tag, but it's always more interesting to take a look at something that stands out. You don't have to add a plethora of unnecessary features or keep pumping the display resolution up, though. You can also stand out by changing the way a device is manufactured and sold. That's what Dutch startup Fairphone has been doing for a while now.

How They Got Here – The Caravan NOT LONG AGO, I found myself in a panel discussion on television with three politicians. One was a Congress member of parliament, the second an MP from the Bharatiya Janata Party (BJP), the third the president of one of the smaller regional formations. In the course of the conversation I found reason to criticise the three netas for their sectarian stands. As the argument grew more heated, I found myself ignoring the others and turning on the Congressman in particular.