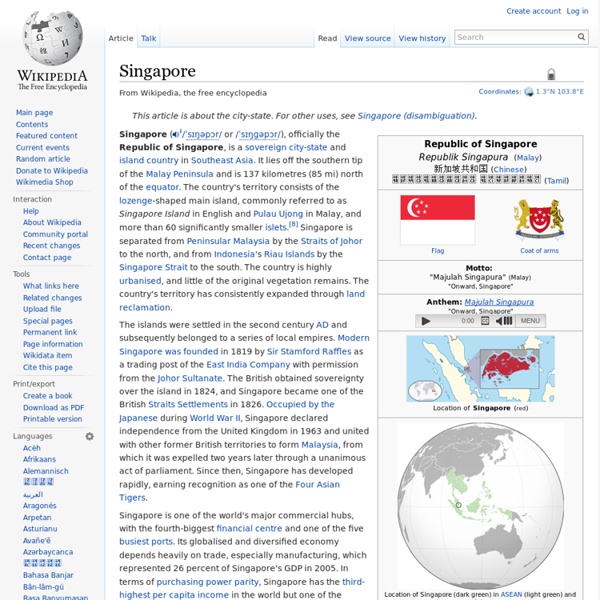 Singapore ( i/ˈsɪŋəpɔr/ or /ˈsɪŋɡəpɔr/), officially the Republic of Singapore, is a sovereign city-state and island country in Southeast Asia. It lies off the southern tip of the Malay Peninsula and is 137 kilometres (85 mi) north of the equator. The country's territory consists of the lozenge-shaped main island, commonly referred to as Singapore Island in English and Pulau Ujong in Malay, and more than 60 significantly smaller islets.[8] Singapore is separated from Peninsular Malaysia by the Straits of Johor to the north, and from Indonesia's Riau Islands by the Singapore Strait to the south. The country is highly urbanised, and little of the original vegetation remains. The country's territory has consistently expanded through land reclamation. The islands were settled in the second century AD and subsequently belonged to a series of local empires. Singapore is a unitary multiparty parliamentary republic, with a Westminster system of unicameral parliamentary government. Etymology

Martil Martil (Arabic: مرتيل‎) is a sea resort north east of Tetouan, Morocco in the Mediterranean Sea. The resort constitutes the end of the Martil Valley. In region Tangier-Tétouan The name Martil comes from the Spanish name of Río Martín at the time of the Spanish protectorate of Northern Morocco.[1] To the north is the golfing resort of Cabo Negro. Coordinates: Taiwan Coordinates: Taiwan ( i/ˌtaɪˈwɑːn/ TY-WAHN Chinese: 臺灣 or 台灣; pinyin: Táiwān; see below), officially the Republic of China (ROC; Chinese: 中華民國; pinyin: Zhōnghuá Mínguó), is a state in East Asia. Originally based in mainland China, the Republic of China now governs the island of Taiwan, which makes up over 99% of its territory,[f] as well as Penghu, Kinmen, Matsu, and other minor islands. Constitutionally, the ROC government has claimed sovereignty over all of "China", in a definition that includes mainland China and Outer Mongolia,[14] but has not made retaking mainland China a political goal since 1992.[15] However, the government's stance on defining its political position largely depends on which political coalition is in charge. Names The official name of the state is the "Republic of China"; it has also been known under various names throughout its existence. History Prehistoric Taiwan Opening in the 17th century Qing rule Hunting deer, painted in 1746 Japanese rule

Seoul Seoul (English pronunciation: /soʊl/; Korean: [sʰʌ.ul] ( ) — officially the Seoul Special City — is the capital and largest metropolis of South Korea. A megacity with a population of more than 10 million, it is the largest city proper in the developed world.[5] The Seoul Capital Area, which includes the surrounding Incheon metropolis and Gyeonggi province, is the world's second largest metropolitan area with over 25.6 million people,[6] home to over half of South Koreans along with 632,000 international residents.[7] Seoul Station is the main terminal of the KTX high-speed rail and the Seoul Subway is the world's second largest subway network by length, considered the world's best subway by Jalopnik,[18] featuring 4G LTE, WiFi, DMB and WiBro. Seoul hosted the 1986 Asian Games, 1988 Summer Olympics, 2002 FIFA World Cup and the 2010 G-20 Seoul summit. Etymology[edit] Unlike most place names in Korea, "Seoul" has no corresponding hanja (Chinese characters used in the Korean language).

San Francisco San Francisco i/sæn frənˈsɪskoʊ/, officially the City and County of San Francisco, is the cultural center and a leading financial hub of the San Francisco Bay Area and Northern California. San Francisco is a popular tourist destination,[18] known for its cool summers, fog, steep rolling hills, eclectic mix of architecture, and landmarks including the Golden Gate Bridge, cable cars, the former prison on Alcatraz Island, and its Chinatown district. History[edit] Upon independence from Spain in 1821, the area became part of Mexico. The California Gold Rush brought a flood of treasure seekers. Entrepreneurs sought to capitalize on the wealth generated by the Gold Rush. It was during this period San Francisco built some of its most important infrastructure. The Bay Bridge, under construction in 1935, took forty months to complete.

Uganda Uganda (/juːˈɡændə/ yew-GAN-də or /juːˈɡɑːndə/ yew-GAHN-də), officially the Republic of Uganda, is a landlocked country in East Africa. It is bordered on the east by Kenya, on the north by South Sudan, on the west by the Democratic Republic of the Congo, on the southwest by Rwanda, and on the south by Tanzania. Uganda is the second most populous landlocked country. The southern part of the country includes a substantial portion of Lake Victoria, shared with Kenya and Tanzania, situating the country in the African Great Lakes region. Uganda takes its name from the Buganda kingdom, which encompasses a large portion of the south of the country including the capital Kampala. Beginning in the late 1800s, the area was ruled as a colony by the British, who established administrative law across the territory. The official language is English. History[edit] The Ugandans were hunter-gatherers until 1,700 to 2,300 years ago. Independence (1962)[edit] Geography[edit] Regional map of Uganda.

Lifestyle We will never tire of the positive effects of nature. Its calming, soothing and inspiring influence will never go out of style. The more we rush, the more time we spend indoors staring at our screens and devices, the more urban our lifestyles become, the more we crave and need time away from it all. It has been amazing to follow the newest solutions to the old dilemmas: How to bring more green space to cities; how to reclaim underused urban land for recreational and other "green" uses; how to provide more and more people the opportunity to enjoy the benefits of spending time in nature. Lately, we have seen fantastic examples of how designers and architects, urban planners and citizens' organizations have accomplished both large and small-scale projects, from bringing a bit of greenery, and open space to otherwise bleak surroundings, to large-scale neighborhood-changing undertakings. Getting back to nature is not a new phenomenon.

Saudia Saudi Arabian Airlines (الخطوط الجوية العربية السعودية) operating as Saudia (Arabic: السعودية‎ as-Saʿūdiyyah ) is the flag carrier airline of Saudi Arabia, based in Jeddah.[2] The airline reverted to its abbreviated English brand name Saudia (used from 1972 to 1996) from Saudi Arabian Airlines (historic name in use until 1971 and reintroduced in 1997) on 29 May 2012; the name was changed to celebrate the company's entry into the SkyTeam airline alliance on that day, and it was a part of a larger rebranding initiative.[3] It operates domestic and international scheduled flights to over 90 destinations in the Middle East, Africa, Asia, Europe and North America. Domestic and international charter flights are operated, mostly during Ramadan and the Hajj season. The airline's main operational base is at Jeddah-King Abdulaziz International Airport (JED). Other major hubs are Riyadh-King Khalid International Airport (RUH), and Dammam-King Fahd International Airport (DMM). History[edit]

New York New York is a state in the Northeastern and Mid-Atlantic regions of the United States. New York is the 27th-most extensive, the third-most populous, and the seventh-most densely populated of the 50 United States. New York is bordered by New Jersey and Pennsylvania to the south and by Connecticut, Massachusetts, and Vermont to the east. The state has a maritime border with Rhode Island east of Long Island, as well as an international border with the Canadian provinces of Ontario to the west and north, and Quebec to the north. The state of New York is often referred to as New York State, so as to distinguish it from New York City. New York City, with a Census-estimated population of over 8.4 million in 2013,[8] is the most populous city in the United States.[9][10] Alone, it makes up over 40 percent of the population of New York State. About one third of all the battles of the Revolutionary War took place in New York. History 17th century American Revolution New York in 1777 19th century

Japan Japan i/dʒəˈpæn/ (Japanese: 日本 Nippon or Nihon; formally 日本国 Nippon-koku or Nihon-koku, literally the "State of Japan") is an island nation in East Asia. Located in the Pacific Ocean, it lies to the east of the Sea of Japan, China, North Korea, South Korea and Russia, stretching from the Sea of Okhotsk in the north to the East China Sea and Taiwan in the south. The characters that make up Japan's name mean "sun-origin", which is why the country is sometimes referred to as the "Land of the Rising Sun". Archaeological research indicates that people lived in Japan as early as the Upper Paleolithic period. Periodic insurrections and civil disturbances continued into the 1870s. Etymology The English word Japan derives from the Chinese pronunciation of the Japanese name, 日本 , which in Japanese is pronounced Nippon listen or Nihon listen . From the Meiji Restoration until the end of World War II, the full title of Japan was Dai Nippon Teikoku (大日本帝國?) History Prehistory and ancient history Feudal era