Create Contests, Giveaways, Polls and more for Social, Email, and your Website 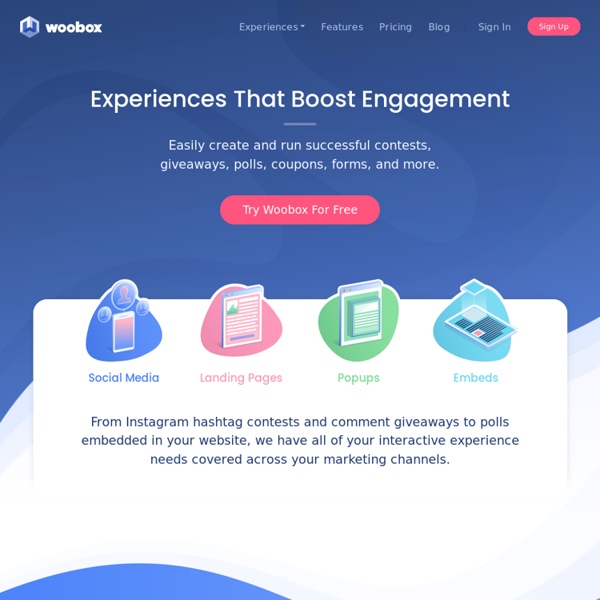 Varieties of Tulpa Experiences: Sentient Imaginary Friends, Embodied Joint Attention, and Hypnotic Sociality in a Wired World “The intention to know”, from Annie Besant & C. W. Leadbeater (1901) Thought-Forms. London: The Theosophical Publishing House. Introduction AdEspresso - Simple, Powerful Facebook Ads Manager If you're serious about making your Facebook ads work, you have to use Adespresso. It has made my life much easier and my campaigns more effective.Emeric Ernoult, AgoraPulse AdEspresso seriously takes Facebook ads to the next level! I'm only using one feature, and it's doubling ROI/cutting spend in half. Whoa.Theo, Cart Smart I'm testing AdEspresso and I absolutely love it! I'd recommend this tool to every marketer that wishes to become the new King of FacebookMariano Favia We super impressed with Facebook Ads Compass by AdEspresso which is a Free Report & Benchmarking tool.Trued Social

Paranormalizing the Popular through the Tibetan Tulpa: Or what the next Dalai Lama, the X Files and Affect Theory (might) have in common What’s the newest and weirdest sub-culture on the Internet, you ask? If you’re Vice Magazine, it’s apparently tulpamancers. Tulpamancers are people who, through extended bouts of concentration and visualization, produce a special kind of imaginary friend that they call a tulpa. Tulpas are understood to be distinct sentient beings with their own personalities, inclinations and (relative) autonomy. Through various active and passive processes known as ‘forcing’ tulpamancers spend hours solidifying their impressions of their creations as something more than just an ordinary inner voice. (Active forcing means concentrating single-pointedly on the tulpa’s form and features, passive forcing is when the tulpamancer finds ways to bring tulpas into more regular routines, such as through ‘narrating’, where tulpamancers chat with or read stories to their creations).

PicFlow, InstaQuote, Repost iPhone Apps for Instagram - Red Cactus Make delightful video slideshows for Instagram Create beautiful text images for Instagram Do more than like it - #Repost it Create handsome collages with your photos Conjuring Up Our Own Gods BIG SUR, Calif. — “AMERICANS are obsessed with the supernatural,” Jeffrey J. Kripal, a scholar of religion, told me here at Esalen, an institute dedicated to the idea that “we are all capable of the extraordinary.” Surveys support this. In 2011, an Associated Press poll found that 8 in 10 Americans believed in angels — even 4 in 10 people who never went to church. In 2009 the Pew Research Center reported that 1 in 5 Americans experienced ghosts and 1 in 7 had consulted a psychic.

What Would Seth Godin Do Seth Godin advocates using cookies to distinguish between new and returning visitors to your site: “One opportunity that’s underused is the idea of using cookies to treat returning visitors differently than newbies. It’s more work at first, but it can offer two experiences to two different sorts of people.” (Source: In the Middle, Starting) I built this WordPress plugin to implement Seth Godin’s idea. It reduces the “work at first” to almost nothing. The Internet's Newest Subculture Is All About Creating Imaginary Friends Kitsune, a tulpa hosted by Maciej from Wroclaw, Poland Kitsune was a mercurial orb hovering above a marble obelisk. Maciej looked at her. “What do you want to be?” he asked.

Need a fresh perspective? See the world like a horse, dog or cat Raúl Soria Every weekday for the month of January, TED Ideas is publishing a new post in a series called “How to Be a Better Human,” containing a helpful piece of advice from a speaker in the TED community. To see all the posts, click here. We are not alone. On Earth, that is. While it may seem laughably obvious to say that, in many ways we humans act like we’re the only inhabitants. Rapportive Leverage Sales Navigator insights anytime you send an email. View rich LinkedIn profile data for your contacts directly in Gmail, and use that knowledge when you reach out next. This Chrome extension is available in two flavors, “Lite” for free LinkedIn members and “Premium” for LinkedIn Sales Navigator subscribers. Sales Navigator Lite for Gmail will let you

40 Times People Experienced Pareidolia And Captured It For Everyone To See (New Pics) "Pareidolia illustrates the interaction between the visual cortex and the frontal cortex of the human brain. It suggests that our brain is highly sensitive and expecting to encounter and process some special classes of objects in our environment because they are biological and socially important to our adaptions to the environment," professor Lee explained to us. "For example, when you are walking in a dark street in the evening, your brain is on high alert to detect whether any threat will jump out any moment. In this case, you are more likely to have face or human pareidolia because it is important for you to err on the side of caution if you mistake a tree as a human being." The professor pointed out that this is the reason why pareidolia often occurs in ambiguous situations.

Twitter Search, Monitoring, & Analytics With iOS 9, Search lets you look for content from the web, your contacts, apps, nearby places, and more. Powered by Siri, Search offers suggestions and updates results as you type. There are two ways to use Search on your iOS device. Quick Search Drag down from the middle of the Home screen and type what you're looking for. Siri Suggestions

Future - The benefits of having a babyface He was America’s most wanted man – a gangster so bloodthirsty, Al Capone booted him out of his gang for being too violent. On 20 April 1934, the police decided to get him. They’d been tipped off that he was staying at a lakeside hotel in Wisconsin, so they launched a secret operation to gun him down. But George Nelson had been blessed with a round face, large eyes and cute little nose. What is camp? The Met Gala theme, explained in words and pictures — Quartzy What do Swan Lake, Tiffany lamps, and “Broccoli” feauring Lil Yachty all have in common? Ostensibly, nothing. But a thread runs through them all: the cultural trope known as “camp.” Camp also happens to be the theme of the Metropolitan Museum of Art’s much-anticipated costume exhibition, the New York City museum announced this week. “Camp: Notes on Fashion” will be unveiled on May 6 at the annual Met Gala, an event underwritten by Gucci and led by Vogue editor-in-chief and Condé Nast artistic director Anna Wintour. The gala will be co-chaired this year by the singer and actress Lady Gaga, the tennis star Serena Williams, Gucci creative director Alessandro Michele, and singer Harry Styles (who recently posed in a very camp livestock-filled Gucci campaign).