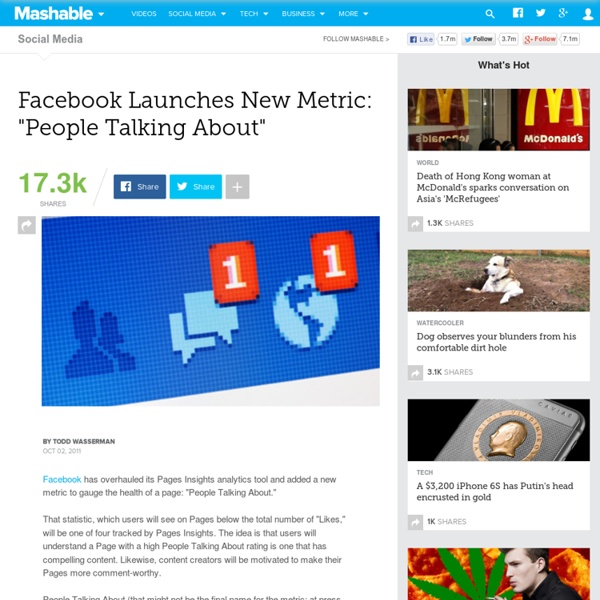 Facebook has overhauled its Pages Insights analytics tool and added a new metric to gauge the health of a page: "People Talking About." That statistic, which users will see on Pages below the total number of "Likes," will be one of four tracked by Pages Insights. The idea is that users will understand a Page with a high People Talking About rating is one that has compelling content. Likewise, content creators will be motivated to make their Pages more comment-worthy. People Talking About (that might not be the final name for the metric; at press time, Facebook wasn't sure) will measure user-initiated activity related to a Page, including posting to a Page's Wall, "liking," commenting, sharing a Page post or content on the Page, answering a Question posed to fans, mentioning a Page, "liking" or sharing a deal or checking in at your Place. The other metrics, which are designed for administrators of brand and media Pages, include "Likes," "Friends of Fans" and "Weekly Total Reach."

Which Countries Use Social Networks The Most? [Study] Experian Hitwise has released some new numbers about social network use around the world. It found that Brazil and Singapore are the top two countries for overall social networking use. But Facebook is not the network on which Brazilians are spending their time. The study also measured the length of the average user's Facebook session and found that Brazilians spent comparatively little time on Facebook. While Singapore users spend nearly nearly 39 minutes per Facebook session on average, Brazilian users spend less than half that, just over 18 minutes. Facebook's Timeline Will Impact Your Career - Alexandra Samuel by Alexandra Samuel | 5:08 PM September 29, 2011 The advent of Facebook’s new Timeline feature gives you, your colleagues, and your customers a whole new set of reasons to share your moment-by-moment news, photos, and reflections. Instead of a flat list of stories on your wall, and a glob of biographical data on your profile, the new Timeline creates a visually attractive story of your life dating all the way back to the date of your (reported) birth. If and when Timeline gets rolled out to Pages (as Facebook is already hinting), we will see brand presences change in much the same way: into dynamic, chronological, and visual stories. But the business impact of Timeline will be felt long before it arrives on brand pages.

Facebook taps Microsoft Bing for Page content translation Facebook has launched a new translation tool that lets you translate posts and comments directly inline on Facebook Pages. The service, which is powered by Microsoft's Bing Translator, means Facebook users can read Page content regardless of the language it is written in. If a comment posted on a Page is in a language that is different than the one your Facebook account is set to, a Translate button may show up just below it (beside the existing Like button).

How do You Use LinkedIn? [INFOGRAPHIC] LinkedIn is the poor second cousin of the social networking fraternity with its glamorous siblings Facebook and Twitter hogging the limelight. Facebook wins the popularity contest with nearly 8 times more friends than LinkedIn and Twitter just keeps getting mentions in the newspaper’s society pages. If LinkedIn had a personality, you would maybe say that it was quiet, professional and quite private. How you use social media is dependent on what you are trying to achieve (goals) and who you want to meet (target audience) and if you want to make serious professional contacts for B2B then LinkedIn is the place to hang out. LinkedIn is the Cocktail Party

The power of social media The Rev. Randall Day is a believer in the power of social media. His revelation came on Christmas 2009. He needed to get word out to his church's 400-member congregation about the upcoming service at St. Marks-in-the-Valley Episcopal Church in Los Olivos. Why Facebook Timeline Will Be Huge for Brands Zeny Huang is an Emerging Media Strategist at JWT New York where she helps brands connect with fans in innovative and meaningful ways using social media. You can follow her on Twitter @Zenidala. When Facebook unveiled Timeline last week, many users were struck by the idea of humanizing your profile by summarizing your life and connections.

Facebook tracks users even after logging out Published: 4:23PM Monday September 26, 2011 Source: Fairfax Source: ONE News An Australian technologist has caused a global stir after discovering Facebook tracks the websites its users visit even when they are logged out of the social networking site. Separately, Facebook's new Timeline feature, launched last week, has been inadvertently accessed by users early, revealing a feature that allows people to see who removed them from their friends' lists. Facebook's changes - which turn profiles into a chronological scrapbook of the user's life - are designed to let its 800 million members share what they are reading, listening to or watching in real-time. But they have been met with alarm by some who fear over-sharing.

Twitter Revenue to Hit $400 Million By 2013 [STUDY] The success of Twitter's Promoted Products will propel the company into $400 million in revenue in 2013 compared to $45 million last year, says a new report. Twitter will earn $139.5 million this year, a 210% jump over last year, according to eMarketer. Debra Aho Williamson, principal analyst at eMarketer, credited Promoted Products' success for the rosy estimate. "Since their debut in April 2010, Twitter’s Promoted Products have proven successful in the U.S.," Williamson said in a statement from eMarketer.

Have You Tried Pearltrees? « Social Media U Need 2 Know This week in #NewhouseSM4 we started using a tool called Pearltrees. With Pearltrees, you can organize all of your favorite sites, articles and links. Pearltrees syncs with Twitter and Facebook, so every time you post a link Pearltrees creates a ‘pearl’ to save it. You can divide your pearls into as many different categories as you want. So far I have an extensive pearl created for all my social media related content.

What Facebook's Changes Mean for Marketers Facebook's bold list of changes, announced Thursday, will put more pressure on advertisers to come up with compelling content and integrate themselves further into consumers' lives. The big loser? The "Like," which will have a smaller role in marketing, industry analysts say. One big change is that Facebook has added a control in the top right of each story that users can check to unmark a top story. Facebook will use that information over time to automatically edit the feeds. Since users now have more control over their news feeds, brands with boring or irrelevant updates will have lower visibility.