Dave Meslin: The antidote to apathy 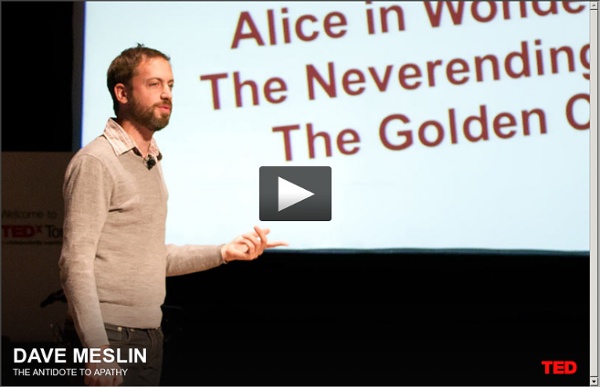 itunes.apple The Top 50 'Pictures of the Day' for 2011 Every day at 5pm the Sifter posts the Picture of the Day. Below you will find a collection of the Sifter’s Top 50 from 2011. It’s hard to imagine the year is almost over, time seems to fly faster each successive year so it’s fun to take a moment and look back at the year that was. Click any of the pictures below to be taken to the individual post to learn more about the photographer and picture taken. To predict what will make you happy, ask a stranger rather than guessing yourself | Not Exactly Rocket Science Want to know how much you’d enjoy an experience? You’re better off asking someone who has been through it, even if they’re a complete stranger, than to find out information for yourself. This advice comes from Daniel Gilbert from Harvard University, who espoused it in his superb book Stumbling on Happiness. In the first study, he found that female students were better able to predict how much they would enjoy a speed-date if they listened to the experiences of strangers than if they make their own assessments based on available information. This interesting result masks a second one of equal importance – people don’t believe that this works. Time and again, psychological studies have found that we overestimate how happy we will be after winning a prize, starting a new relationship or taking revenge against those who have wronged us. Gilbert says that the main reason for this is an inability to accurately imagine future events. Photo by Laughlin, found on Flickr

Shawn Achor Shawn Achor is the winner of over a dozen distinguished teaching awards at Harvard University, where he delivered lectures on positive psychology in the most popular class at Harvard. Shawn has become one of the world’s leading experts on the connection between happiness and success. His research on happiness made the cover ofHarvard Business Review, his TED talk is one of the most popular all time with over 4 million views, and his lecture airing on PBS has been seen by millions. Shawn teaches for the Advanced Management Program at Wharton Business School, and collaborates on research with Yale and Columbia University. In 2007, Shawn founded GoodThink, Inc. Shawn advises several projects related to spreading happiness, including BetterUP, an online training community where members are coached by experts to realize their full potential at work. Shawn graduated magna cum laude from Harvard and earned a Masters degree from Harvard Divinity School in Christian and Buddhist ethics.

The Power of 'Power Posing' - Mission: Innovation Next-generation space suits, the collapse of Iceland’s banking system, and changing perceptions among Africans about their place in the world were among the dizzying array of ideas that charity leaders and others gathered in the small town of Camden, Me., to discuss—all as part of an effort to stimulate new thinking about social change. PopTech, the New York nonprofit that organizes the annual conference, hopes that exposing participants to work outside their areas of expertise will lead to interdisciplinary collaboration and spark new approaches to fixing social problems. With strains of the “Wonder Woman” theme song opening her talk, Amy J.C. Watch Ms. Return to Top

Porto-Prefabs: Modular Cabin Plans + Prefab Home Building Prefabricated homes have come a long way from the boring boxes of days gone by, but this design takes them to the next level with cabins that blow other plans and kits way out of the water. For the modern nomad, this mobile nature-centric getaway is not only sustainable but surprisingly portable: its (mostly wood and glass) parts can be disassembled and moved with relative easy. It has a small physical footprint, making it an eco-friendly way to leave as little trace behind as possible. Sitting on a square that is only six feet across in each direction, the Fincube cabin sits solidly on a platform that both affords it better views and keeps it from physically impacting the forest floor below it. A wooden framework lets light in and views out but maximizes interior privacy, particularly at a distance.

The Benefits of Optimism Are Real - Emily Esfahani Smith Heart rates rapidly increased. Arteries constricted. Blood pressure shot up. Then, participants were shown a short video clip that either evoked negative emotions (like sadness), positive emotions (like happiness), or a neutral condition of no emotions. The participants were also told that if they were shown a video clip "by chance" that they were off the hook: They did not have to give the speech after all. Here was the interesting finding: The heart activity of the participants who viewed the positive clips returned to normal much quicker than their peers who were shown the negative or neutral clips. It turns out that resilient people are good at transforming negative feelings into positive ones. With that in mind, the researchers wondered if they could inject some positivity into the non-resilient people to make them more resilient. Resilient people who saw the task as a challenge did fine, as predicted. The people who benefitted from the priming were non-resilient people.