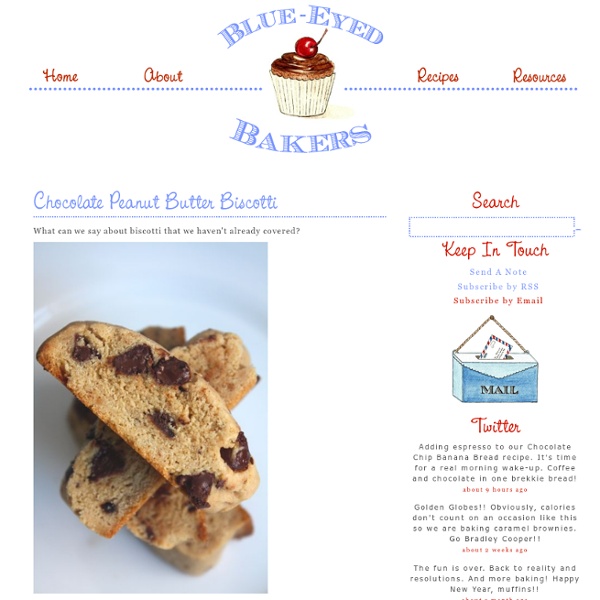 Whoa. We mean, seriously. WHOA. Excuse us, but where did March go? Wasn't it like just March? And now we're halfway through April!?!?

SugarBlog - The Ultimate Ice Cream Cake Cookie&Pie - StumbleUpon This is by far the sweetest of all things I have ever made. Sweet as in the adjective, adverb and noun. :) Let me tell you from bottom layer to top layer pie crust, chocolate chip cookie dough, cake icing, vanilla ice cream, rainbow chip cake, more cake icing and sprinkles. Big, fat, rainbow sprinkles! Quite possibly the Turducken of Sweets.

Blueberry Muffins Recipe Muffins are a dangerous thing in my kitchen. I don’t make them all too often because when I do, I can’t stop eating them. For breakfast, for snacks, pretty much any time I walk past the kitchen and spy the container. It may all go back to college when our dorm room was regularly adorned with those slabs of muffins from Sam’s Club. If I remember correctly there was blueberry, banana nut and chocolate. sewing room Sewing and craft rooms come in many different sizes. It's not the size of the room that matters, it's the creativity that comes from those spaces that's important. I've been married for over 26 years and my sewing/craft rooms have run the gamut from sewing on the dining room table, to storing things in a tiny closet and then many many years in our unfinished basement. My current sewing room has a history and story all it's own, which some of you may have read in previous posts.

Cinnamon Toast&Rolls - Circle B Kitchen - Circle B Kitchen - StumbleUpon The USDA released its new food pyramid the other day (which is actually a plate now instead of a pyramid), and I am sorely disappointed to report that cinnamon rolls did not appear anywhere on that plate. I think by now most of us know what should be on our dinner plate in terms of healthy, well-rounded nutrient-laden meals, but it is my considered opinion that our breakfast plate should include cinnamon rolls now and then. And not just any cinnamon roll, mind you, but how ‘bout a homemade cinnamon roll hybrid that is a cross between a cinnamon roll and cinnamon toast, is super easy to make and gosh darn delicious. In honor of their ancestry, I call these little gems cinnamon toast rolls, and here’s all you need to make them… Yep. That’s it… some soft white bread, some butter and some cinnamon sugar.

4th of July Grilling Spectacular Happy Fourth of July!! For the holiday’s I like to do a big post with great food. Since this is the summer and the 4th of July is such a big grilling day, I decided to make burgers and fries. Not just any burgers, firecracker burgers. Not just any fries, sour cream and chive fries. This was going to be the best grilling day ever. Cream Cheese Chocolate Chip Cookies & Betchacanteatjustone's Blog This just may be my new favorite Chocolate Chip Cookie. It’s made with butter AND cream cheese. It’s dense, chewy, chocolatey and very delicious. Spiral sugar cookies These colorful cookies from Sprinkle Bakes caught my eye last week as I perused for something festive to bring to Christmas Eve dinner. Aren't they pretty? The green swirl was fun for Christmas, but any color would be just as fun.

How To Cook Like Your Grandmother - StumbleUpon I’ve tried lots of brownie recipes: Boxes, scratch, frosted, plain, nuts, chips, fudge … Each of them has something to like, but depending on my mood I might want a change of pace. Not any more. My wife found this recipe, and it’s perfect. I’m done looking. This is the brownie recipe that I’ll use from now on. Ingredients How to Make a Rose Apple Tart I love pie. Love it. LOVE it. For flavor, it can't be beat, in my opinion. No finer dessert around. But even I have to admit it has a more humble, rustic appearance than a fancy cake.

Better-Than-Crack-Brownies I’m sorry for doing this to you. I really am. But see, last Friday while I was on a 10-hour road trip heading for vacation, I received this recipe from a reader named Liz. Liz, I love you. King Arthur Flour - Baking Banter - StumbleUpon Love brownies. Love their shiny, flaky top that shatters into micro-thin shards that shower onto your fingers as you eat. Love their dark, gooey center. Their “chocolate nirvana” flavor. Sometimes can’t deal with the bake, wait to cool, cutting into squares messiness and fuss of brownies.