Why We Fall in Love: The Paradoxical Psychology of Romance and Why Frustration Is Necessary for Satisfaction 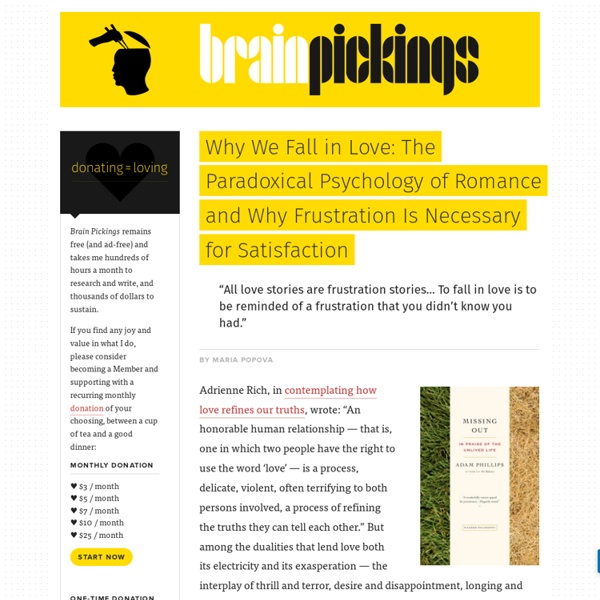 Adrienne Rich, in contemplating how love refines our truths, wrote: “An honorable human relationship — that is, one in which two people have the right to use the word ‘love’ — is a process, delicate, violent, often terrifying to both persons involved, a process of refining the truths they can tell each other.” But among the dualities that lend love both its electricity and its exasperation — the interplay of thrill and terror, desire and disappointment, longing and anticipatory loss — is also the fact that our pathway to this mutually refining truth must pass through a necessary fiction: We fall in love not just with a person wholly external to us but with a fantasy of how that person can fill what is missing from our interior lives. Psychoanalyst Adam Phillips addresses this central paradox with uncommon clarity and elegance in Missing Out: In Praise of the Unlived Life (public library). Phillips writes: Missing Out, previously discussed here, is a magnificent read in its totality.

The Most Important To-Do List I Ever Created. Over the past decade, I have learned a lot about myself, relationships, compromise, pain, forgiveness, purification, happiness, regret, heartbreak, love, compassion and self-worth…amongst other things. After a sleepless night of tears and reflection, I needed something to kick start my morning, my Monday, my month. So, I wrote a list for myself, which is something that I do every other day, just in a totally different way. Something to focus on when I get lost along the way. Something to remind me of what is important to me. Something to remind me of how far I have come, how this is the only moment that counts and how simple life can be. Stress and the Social Self: How Relationships Affect Our Immune System Relationships, Adrienne Rich argued in her magnificent meditation on love, refine our truths. But they also, it turns out, refine our immune systems. That’s what pioneering immunologist Esther Sternberg examines in The Balance Within: The Science Connecting Health and Emotions (public library) — a revelatory inquiry into how emotional stress affects our susceptibility to burnout and disease. As just about every socialized human being can attest, interpersonal relationships play a significant role in our experience of stress — either contributing to it and or alleviating it. And the way we connect — something psychologist Barbara Fredrickson has termed “positivity resonance” — is deeply patterned through our earliest experiences of bonding, which train our limbic pathways.

In Praise of Missing Out: Psychoanalyst Adam Phillips on the Paradoxical Valu... “In the gap between who we wish one day to be and who we are at present, must come pain, anxiety, envy and humiliation,” Alain de Botton wrote in his meditation on Nietzsche and why a fulfilling life requires difficulty. “We are well advised to keep on nodding terms with the people we used to be, whether we find them attractive company or not,” Joan Didion wrote in contemplating the value of keeping a notebook. But we are just as well advised, it turns out, to keep on nodding terms with the people we could’ve been, the people we never were, the people who perished in the abyss between our ideal selves and our real selves. Soulmates, Twin Flames and Kindred Spirits — What’s the Difference? Photo by: Cameron Gray Love. It exists within all people, places and things. It is inextricably linked to God or Spirit. It is the most powerful force in the universe.

What Is Flow? - The Psychology of Flow By Kendra Cherry Updated December 16, 2014. Imagine for a moment that you are running a race. Psychologist Barry Schwartz on What Motivates Us to Work, Why Incentives Fail, and How Our Ideas About Human Nature Shape Who We Become By Maria Popova The organism we call culture — all of our art and literature and human thought — is in a constant symbiotic dance with human nature. Our culture both reflects who we are — our values, our hopes, our fears, our ideals — and shapes who we become by immersing us in its collectively agreed upon mythology, systematically perpetuating certain values and negating others. E.B. White knew this when he considered the responsibility of the writer and asserted that “writers do not merely reflect and interpret life, they inform and shape life.”

Why I Meditate                        I have been searching for “answers” most of my life and have written about an epiphany in 2007 when I watched a TED video in which geneticist Juan Enriquez spoke of DNA not as “like” software, but as encoded instructions. At that time I was struck by the reality (as opposed to the abstract notion) that there must be or have been some “higher intelligence” in Nature (“Who was the programmer?”). I was fine with leaving the question open but it made me much less interested in “normal” life and I decided that connection with such higher intelligence, if it still exists (and really where did it go?), should take priority in my life.

For When You Think That No One Will Love You You can never quite remember the actual moments when someone says that they love you for the first time. You wait for it so long, practice how you will respond, prevent yourself from saying it before them (you wouldn’t want to look desperate), and then it happens, and it’s like you go temporarily deaf. There is a ringing, like a TV show that has cut off to go to an emergency announcement. The 11 Differences Between Dating a European Man vs an American Man I never thought that the cultural background of a dating prospect would make much of a difference when it came to relationships. However, since living in New York, I’ve had the opportunity to meet many different people from various backgrounds and it’s become clear that there are definite cultural norms specific to European men versus American men (especially New Yorkers). I’m not to judge that one is better than the other, and mind you, my observations are based on my own experiences as well as a group of women I’ve interviewed in the last two years. The below is a list of some of the themes and commonalities observed. Now, when I discuss the differences between European and American, I’m referring to a mindset.

Related:
Related:  PHILOSOPHY AND PSYCHOLOGY 5   -  part2   -  Read it!   -  Intimacy & Love   -  Derren Brown - Person Swap - YouTube   -  Teaching With Documents   -  29 years old and hearing myself for the 1st time! - YouTube   -  Neurotransmitters and Drugs Chart   -  Classroom Materials   -  Questions No One Knows the Answers to (Full Version) - Chris Anderson - YouTube   -  Telekinetic Coffee Shop Surprise - YouTube   -  The most popular talks of all time | Playlist   -  Why we love repetition in music - Elizabeth Hellmuth Margulis - YouTube   -  PSYCHOTHERAPY - Freud - YouTube   -  The Backwards Brain Bicycle - Smarter Every Day 133 - YouTube   -  The School of Life   -  Johann Hari: Everything you think you know about addiction is wrong   -  The European Refugee Crisis and Syria Explained - YouTube   -  Beyond Working Hard: What Growth Mindset Teaches Us About Our Brains | GROWTH MINDSET