David Christian: The history of our world in 18 minutes 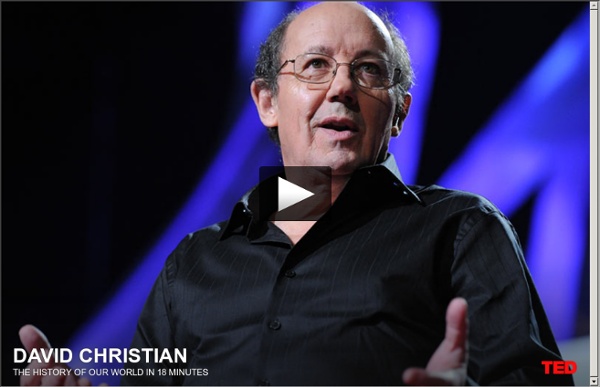 Aztec Children The lives of Aztec children are fascinating in many respects. To understand how children fit into Aztec culture, and how they were honoured, we should go right back to the beginning... even before the children were born. Birth Big Bang According to the Big Bang model, the universe expanded from an extremely dense and hot state and continues to expand today. The graphic scheme above is an artist's concept illustrating the expansion of a portion of a flat universe. The Big Bang is the scientific theory that is most consistent with observations of the past and present states of the universe, and it is widely accepted within the scientific community. It offers a comprehensive explanation for a broad range of observed phenomena, including the abundance of light elements, the cosmic microwave background, large scale structure, and the Hubble diagram.[3] The core ideas of the Big Bang—the expansion, the early hot state, the formation of light elements, and the formation of galaxies—are derived from these and other observations. As the distance between galaxies increases today, in the past galaxies were closer together. Overview

Introduction to the Human Journey The parent Institute of this project, The Institute for the Study of Human Knowledge, was founded on providing the basis of information available to the general public, primarily about what it means to be human: our capacities, our weaknesses, our potential. This project is under the direction of our President, Robert Ornstein PhD., with contributions from associates of ISHK, some of whom are professionals in the various fields and others interested amateurs. The future depends on our understanding who we are, and how the past has made us so: what is unchanging about Human Nature, and what we can and must change to face a world that is far different from our ancestors’ world. Homo Sapiens Neanderthalensis So this website begins not at the origin of the universe, or the billions of years of the development of life from the primordial slush (everyone says “primordial soup,” but that’s too appetizing). Where to begin is always a question.

Aztecs for Kids - Daily Life Like nearly all of the ancient civilizations, the rich lived in luxury and the poor worked. In the Aztec civilization, class structure was very important. Homes : The Rich: Homes of the nobles and wealthy were made of sun-dried brick. If you were very wealthy, you home could be made of stone. All homes were whitewashed to make them look clean and shiny. masaru emoto In all of these experiments, distilled water for hospital usage produced by the same company was used. Since it is distilled twice, it can be said that it is pure water. The result was that we always observed beautiful crystals after giving good words, playing good music, and showing, playing, or offering pure prayer to water. On the other hand, we observed disfigured crystals in the opposite situation.

Alphabet The letters in the Greek alphabet presented below are used for printed Ancient Greek texts. The earliest Greek texts that have survived were written with a radically different script called Linear B. For a detailed and wonderfully well argued discussion of the origins of the Greek alphabet, see Roger D. Woodard’s book, Greek Writing from Knossos to Homer. James A. Foshay Learning Center Advanced Placement World History Mrs. Travis This is a college-level survey class which prepares students for the national exam on Thursday, May 12 at 8 AM.

WTF Is This Weird Web-Tower Thing? We Asked Around. No One Knows So far, no one knows what’s crafting these enigmatic structures. Update, 1 p.m.: We’ve added comments from several more experts, below. Something in the Peruvian Amazon is making weird, intricate structures that resemble white picket fences surrounding an Isengard-like spire.

History of the alphabet The history of alphabetic writing goes back to the consonantal writing system used for Semitic languages in the Levant in the 2nd millennium B.C. Most or nearly all alphabetic scripts used throughout the world today ultimately go back to this Semitic proto-alphabet.[1] Its first origins can be traced back to a Proto-Sinaitic script developed in Ancient Egypt to represent the language of Semitic-speaking workers in Egypt. This script was partly influenced by the older Egyptian hieratic, a cursive script related to Egyptian hieroglyphs.[2][3] Mainly through Phoenician and Aramaic, two closely related members of the Semitic family of scripts that were in use during the early first millennium BC, the Semitic alphabet became the ancestor of multiple writing systems across the Middle East, Europe, northern Africa and South Asia. Pre-history[edit] Two scripts are well attested from before the end of the fourth millennium BCE: Mesopotamian cuneiform and Egyptian hieroglyphs.

Göbekli Tepe By Charles C. Mann Photograph by Vincent J. Teaching with Primary Sources Program- Teaching with Primary Sources About the Program The Teaching with Primary Sources Program works with colleges and other educational organizations to deliver professional development programs that help teachers use the Library of Congress's rich reservoir of digitized primary source materials to design challenging, high-quality instruction. Read more about the TPS Program TPS Regional Program 10 Incredible Chemical Reaction GIFs Explained We encounter thousands of chemical reactions every day: plants use them in photosynthesis, metals rust over time, and combustion reactions provide us with heat and light, among thousands of other daily uses. Chemical reactions occur when reactants transform into new substances, called products, through creating and breaking bonds between atoms. Sometimes the process creates some pretty wild effects. Check out our top 10 chemical reactions below: 1) Disintegration (Mercury Reacts with Aluminum)

Ancient Greece The Parthenon, a temple dedicated to Athena, located on the Acropolis in Athens, is one of the most representative symbols of the culture and sophistication of the ancient Greeks. Ancient Greece was a Greek civilization belonging to a period of Greek history that lasted from the Archaic period of the 8th to 6th centuries BC to the end of antiquity (ca. 600 AD). Immediately following this period was the beginning of the Early Middle Ages and the Byzantine era.[1] Included in ancient Greece is the period of Classical Greece, which flourished during the 5th to 4th centuries BC. Classical Greece began with the repelling of a Persian invasion by Athenian leadership.