Lets compile a list of the best online learning centers. We could all use a little education. 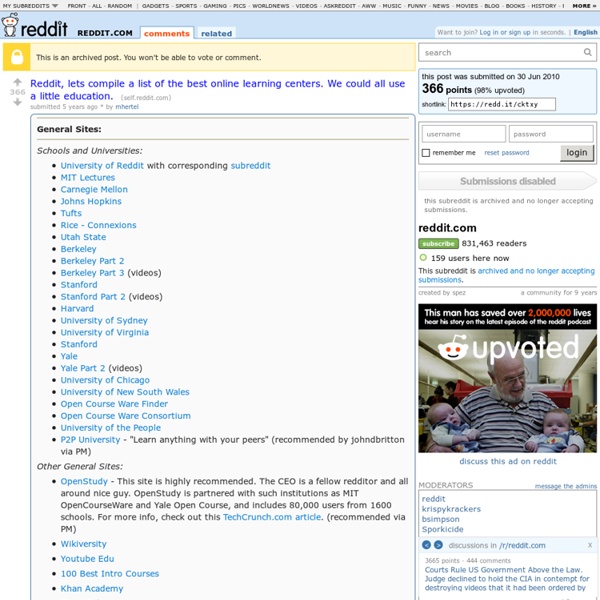 Got one of these as an early Christmas present. For anyone who is wondering what gifts to buy for a guitarist/bassist - these are amazing :D : Music 750 Free Online Courses from Top Universities Take online courses from the world's top universities for free. Below, you will find 1,500 online courses from universities like Stanford, Yale, MIT, Harvard, Oxford and more. You can use this collection of online courses to learn everything you want--from history, philosophy and literature, to physics, biology, psychology, and computer science. Note: This page includes a lot of Massive Open Online Courses (MOOCs).

Notice of Understanding and Intent And Claim of Right Dear, Addressed persons I here present you with a Notice of Understanding and Intent. I am sending this letter out as a courtesy in order to avoid any further confusion or potential conflict. I am now expanding the reach of my discourse in order to maintain my honor and ensure maximum clarity between myself and all agents of government. After receiving this letter, please expect a Notice of Understanding and Claim of Right in order to ensure maximum clarity amongst all parties.As a peaceful man desiring to avoid conflict and live lawfully with maximum freedom, I have recently been studying the history of the united states along with its legal system and have come to some very interesting conclusions. After reading various acts and exploring the way language is used in those acts, I have realized that “lawful” and “legal” are not always the same.

Reaction GIFs Become a Programmer, Motherfucker If you don't know how to code, then you can learn even if you think you can't. Thousands of people have learned programming from these fine books: Learn Python The Hard Way Learn Ruby The Hard Way Learn Code The Hard Way Christ and the Constitution – Ezra Taft Benson - Latter-day Conservative (Ezra Taft Benson. Conference Report, April 1967) Nearly two thousand years ago a perfect man walked the earth: Jesus the Christ. He was the son of a heavenly father and an earthly mother. He is the God of this world, under the Father. He taught men truth, that they might be free. Ok reddit lets make it...The List of Real Life Cheat Codes!!!! : AskReddit

CS 101- class UPDATE: we're doing a live, updated MOOC of this course at stanford-online July-2014 (not this Coursera version). See here: CS101 teaches the essential ideas of Computer Science for a zero-prior-experience audience. Computers can appear very complicated, but in reality, computers work within just a few, simple patterns. CS101 demystifies and brings those patterns to life, which is useful for anyone using computers today. In CS101, students play and experiment with short bits of "computer code" to bring to life to the power and limitations of computers.

United States Foreign Policy – Ezra Taft Benson - Latter-day Conservative Observe good faith and justice towards all Nations; cultivate peace and harmony with all. Religion and Morality enjoin this conduct; and can it be, that good policy does not equally enjoin it? It will be worthy of a free, enlightened, and, at no distant period, a great Nation, to give to mankind the magnanimous and too novel example of a people always guided by an exalted justice and benevolence. zzyzzyxx comments on This is why I avoid most freeways. Jumpstart Lab 101 Constitutional Questions To Ask Candidates – W. Cleon Skousen - Latter-day Conservative W. Cleon Skousen. 101 Constitutional Questions To Ask Candidates. 1980. Because so many millions of Americans finally realize that something is seriously wrong with the way the government is handling our affairs, people are continually asking: “Do you think there is still time to turn it around?”

Vitamin D Expert Fired for Recommending Sunshine Vitamin D Expert Fired for Recommending Sunshine Dr. Michael F. Holick, a professor at Boston University's medical school and a well-known researcher on the topic of sunlight and vitamin D, was asked to resign from his position in the dermatology department after the chairwoman of the department criticized his conclusions. Holick, author of the new book has spoken out about the importance of sun exposure to boosting vitamin D levels and health.