How to Love: Legendary Zen Buddhist Teacher Thich Nhat Hanh on Mastering the Art of “Interbeing” 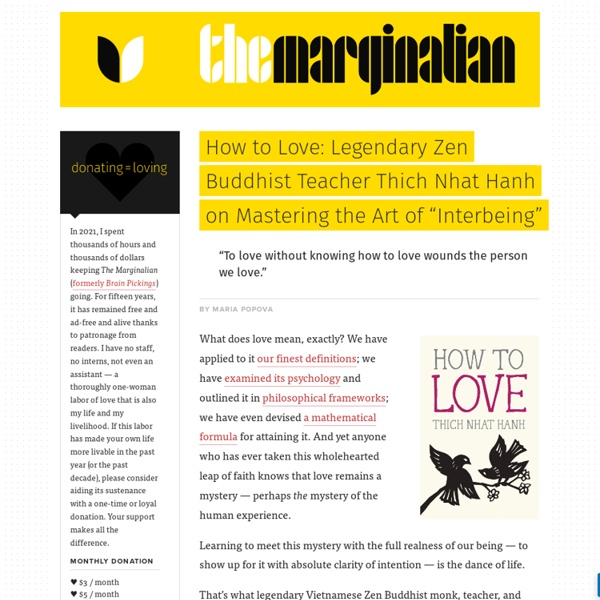 What does love mean, exactly? We have applied to it our finest definitions; we have examined its psychology and outlined it in philosophical frameworks; we have even devised a mathematical formula for attaining it. And yet anyone who has ever taken this wholehearted leap of faith knows that love remains a mystery — perhaps the mystery of the human experience. Learning to meet this mystery with the full realness of our being — to show up for it with absolute clarity of intention — is the dance of life. That’s what legendary Vietnamese Zen Buddhist monk, teacher, and peace activist Thich Nhat Hanh (b. Indeed, in accordance with the general praxis of Buddhist teachings, Nhat Hanh delivers distilled infusions of clarity, using elementary language and metaphor to address the most elemental concerns of the soul. At the heart of Nhat Hanh’s teachings is the idea that “understanding is love’s other name” — that to love another means to fully understand his or her suffering. Related:  Self-Improvement • lookfar

PRINCE2 Road map Infographic - PRINCE2 Primer After the graphic below showing how the PRINCE2 Processes interact, I have given a detailed description which can be read in conjunction with the graphic itself. PRINCE2 Process Road Map. I will start at the top left-hand corner of the diagram with the ‘trigger’ for any PRINCE2 project – the Project Mandate. A project can be standalone or part of a programme, in which case a project may be triggered from either those within a programme, here called programme management, or by appropriate senior management within an organization, here called corporate management. A PRINCE2 project is therefore triggered by either of the above by issuing a Project Mandate. This document should contain as a minimum, the name of the prospective project board executive and the reasons for the need of the project. The first process is called Starting Up a Project and uses the initials SU. The Project Brief also contains the Project Approach management document. So the steps would be: Want more information?

Mary Oliver on What Attention Really Means and Her Moving Elegy for Her Soul Mate – Brain Pickings Mary Oliver is one of our era’s most beloved and prolific poets — a sage of wisdom on the craft of poetry and a master of its magic; a woman as unafraid to be witty as she is to wise. For more than forty years, Oliver lived on Cape Cod with the love of her life, the remarkable photographer Molly Malone Cook — one of the first staff photographers for The Village Voice, with subjects like Walker Evans and Eleanor Roosevelt, and a visionary gallerist who opened the first photography gallery on the East Coast, exhibited such icons as Ansel Adams and Berenice Abbott, and recognized rising talent like William Clift. (She was also, living up to her reputation as “a great Bohemian American,” the owner of a bookshop frequented by Norman Mailer and occasionally staffed by the filmmaker John Waters.) When Cook died in 2005 at the age of eighty, Oliver looked for a light, however faint, to shine through the thickness of bereavement. I took one look and fell, hook and tumble.

Declaration of the Independence of the Mind: An Extraordinary 1919 Manifesto Signed by Albert Einstein, Bertrand Russell, Jane Addams, and Other Luminaries Decades before Martin Luther King, Jr. made his timeless case for the ancient Greek notion of agape as a centerpiece of nonviolence, another luminous mind and soaring spirit challenged humanity to pause amid one of the most violent periods in history and consider an alternative path. The declaration was published in the socialist newspaper L’Humanité on June 26, 1919, and was later included in the out-of-print treasure Hermann Hesse & Romain Rolland: Correspondence, Diary Entries and Reflections (public library) — Rolland enclosed the text in an April 1919 letter to Hesse, asking the beloved German writer to be among the signatories. “I want to express at once at least my unreserved approval of your admirable [declaration],” Hesse wrote in reply. “Please add my name to it as well.” Rolland writes: May this experience be a lesson to us, at least for the future! Arise! Stefan Zweig captures the spirit of the declaration beautifully in his biography of Rolland, itself a sublime work of art:

TECHNIQUES FOR MAKING POSITIVE IMPRESSIONS 9 Ways of Profiting From eBay Arbitrage - Antiques and eBay Tips Arbitrage: (noun) the purchase of a commodity in one market for the purpose of immediately selling it at a higher price in another market. I think the best way to explain eBay arbitrage is to give you a few examples. Each example illustrates a different method of eBay arbitrage. 9 Ways of Doing eBay Arbitrage eBay Arbitrage Method 1 Every few days, I go through my bookmarked searches and see what is new. I save bad eBay images to my drive and then enhance them to see what the seller has. This big difference between what I bid, and what I ended up paying was due to the poor pictures and because the auction was listed in the wrong category. After I got the items in the mail, I pulled the two cars I wanted out for my collection and listed the rest on eBay. I put a pair of cars worth about $350 into my collection and made $375. eBay Arbitrage Method 2 Here's another example of eBay Arbitrage. Luckily for me, the majority of people who list this item on eBay, list it in the cheaper category. PS.

Friedrich Nietzsche on Why a Fulfilling Life Requires Embracing Rather than Running from Difficulty German philosopher, poet, composer, and writer Friedrich Nietzsche (October 15, 1844–August 25, 1900) is among humanity’s most enduring, influential, and oft-cited minds — and he seemed remarkably confident that he would end up that way. Nietzsche famously called the populace of philosophers “cabbage-heads,” lamenting: “It is my fate to have to be the first decent human being. I have a terrible fear that I shall one day be pronounced holy.” In one letter, he considered the prospect of posterity enjoying his work: “It seems to me that to take a book of mine into his hands is one of the rarest distinctions that anyone can confer upon himself. I even assume that he removes his shoes when he does so — not to speak of boots.” A century and a half later, Nietzsche’s healthy ego has proven largely right — for a surprising and surprisingly modern reason: the assurance he offers that life’s greatest rewards spring from our brush with adversity. With his signature blend of wit and wisdom,

Brave Genius: How the Unlikely Friendship of Scientist Jacques Monod and Philosopher Albert Camus Shaped Modern Culture What makes a good life, a meaningful life, a life of purpose? And how can one live it amidst pain and destruction; how can the human spirit soar in the face of crushing adversity? The meaning of life resides in the answers to these questions, which countless luminaries have been asking since the dawn of recorded time, and which an unlikely duo of Nobel-laureate friends — revered writer, journalist and philosopher Albert Camus and pioneering biologist Jacques Monod — set out to answer during one of the darkest periods of human history, the peak of World War II. In Brave Genius: A Scientist, a Philosopher, and Their Daring Adventures from the French Resistance to the Nobel Prize (public library), molecular biology and genetics professor Sean B. It was the Occupation of Paris that served, as Carroll poignantly puts it, as the “perverse catalyst” that sparked each man’s genius and propelled them into intersecting trajectories of greatness as they entered each other’s lives. My dear Monod.

Joseph Brodsky’s 6 Rules for Playing the Game of Life Like a Winner by Maria Popova “Of all the parts of your body, be most vigilant over your index finger, for it is blame-thirsty. A pointed finger is a victim’s logo.” The exquisite commencement address is a special kind of art, necessitating in equal parts the vulnerability of sharing personal experience and the challenge of extracting from it wisdom of universal resonance. On December 18, 1988, twenty-five years after his writing had been denounced as “anti-Soviet” in his native Russia and mere months after winning the Nobel Prize in Literature “for an all-embracing authorship, imbued with clarity of thought and poetic intensity,” prolific poet and essayist Joseph Brodsky took the podium at Ann Arbor and addressed the graduating class at the University of Michigan with one of the most beautiful and timeless commencement speeches ever given, offering six invaluable pieces of wisdom on good-personhood and the meaning of life. Brodsky begins: Life is a game with many rules but no referee. Share on Tumblr