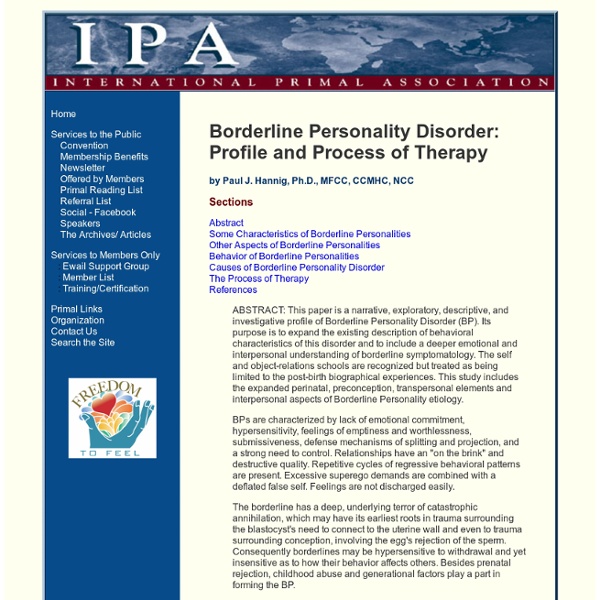 Borderline personality disorder Photo by: kentoh Definition Borderline personality disorder (BPD) is a mental disorder characterized by disturbed and unstable interpersonal relationships and self-image, along with impulsive, reckless, and often self-destructive behavior. Description Individuals with BPD have a history of unstable interpersonal relationships. The term "borderline" was originally used by psychologist Adolf Stern in the 1930s to describe patients whose condition bordered somewhere between psychosis and neurosis . Causes and symptoms Causes Adults with borderline personalities often have a history of significant childhood traumas such as emotional, physical, and/or sexual abuse and parental neglect or loss. Symptoms The handbook used by mental health professionals to diagnose mental disorders is the Diagnostic and Statistical Manual of Mental Disorders (DSM). Demographics Diagnosis Borderline personality disorder typically first appears in early adulthood. Treatment Prognosis Resources

How to Deal with Borderline Personality Disorder Steps Method 1 of 4: Understand "Borderline Personality Disorder" (BPD) 1Expect some of these character traits in the person with "Borderline Personality Disorder" (BPD), such as:Poor, or lack of, control over emotions.Sudden changes in mood.Poor follow-through. Frequently changing opinions and plans.Inability to maintain normal emotional relationships, throwing temper tantrums, arguing over insignificant events, fits of rage, at times "for no clear reason".Or the opposite, called "flat affect", often unable to feel or express anger.Fear of loneliness and isolation: yet, often at the same time, showing a tendency to avoid people, keeping them away.Fear of abandonment. 2See some characteristics on the positive side:Can be highly creative.Have a quick wit and are sometimes considered the life of the party.Are often talented and particularly intelligent. Method 2 of 4: Causes of BPD 1Understand the causes of BPD. Method 3 of 4: Seek professional assistance Method 4 of 4: Dealing with it all Ad

How to deal with people with BPD Joanna Wald's image for: "How to Deal with People with Borderline Personality Disorder" Caption: Location: Image by: Dealing with someone suffering from BPD takes good personal boundaries and more patience than you ever thought you had in you. The first thing to learn is that you cannot give anyone a sense of self-worth. Your loved one will probably have sudden and violent mood swings. Your loved one will also probably hate you sometimes. These next two are where good personal boundaries are especially important. Your loved one will probably do things that seem strange, rude or irresponsible. Your loved one may make dramatic gestures, like threatening to leave you or commit suicide, expecting you to prove your love or save him or her. Dealing with Borderline Personality Disorder can be exhausting, but people with this disorder appreciate it more than they can express.

Borderline Personality Disorder - symptoms, nature, and treatment are outlined and explored How to Locate a Psychiatrist and Therapist Experienced in Borderline Disorder After taking the online test, you may believe that you have borderline disorder, or traits of borderline disorder. Your question may then be, “How can I locate a psychiatrist and mental health clinician in my area who are experienced in diagnosing and treating borderline disorder?” The following referral source is the most likely to be of help to you: Borderline Personality Disorder Resource Center 21 Bloomingdale Road White Plains, NY 10605 Office: 888-694-2273info@bpdresourcecenter.orgwww.bpdresourcecenter.org If you are still unable to locate suitable help from the BPD Resource Center, you may wish to contact your local district branch of the American Psychiatric Association (APA), or the American Academy of Child and Adoloescent Psychiatry (AACAP), and ask if they can direct you to several psychiatrists or other clinicians in your community who are skilled in the area of borderline disorder. For Loved Ones >

Borderline Personality Disorder Demystified - written by Dr. Friedel Borderline Personality Disorder Demystified Borderline Personality Disorder Demystified (the book) was written by Dr. Friedel to provide a comprehensive and authoritative source of information for people who have, or think they may have, borderline disorder, and for their families. The material in this book is considerably more extensive and detailed than that which can be provided on this website. It is likely that you will need much of this information as you seek and progress in treatment. Since the book was published in 2004, it has sold over 70,000 copies worldwide. Purchase this book online by clicking on any of the following links: Book Reviews Excerpts from several of the reviews of the book follow: “For readers who suspect that they or someone they love suffers from BPD, this guide is a good place to start learning how to find help.” “Dr. Book Contents Chapter 1. Chapter 2. Chapter 3. Chapter 4. There are a number of misconceptions about the causes of borderline disorder. Chapter 5.