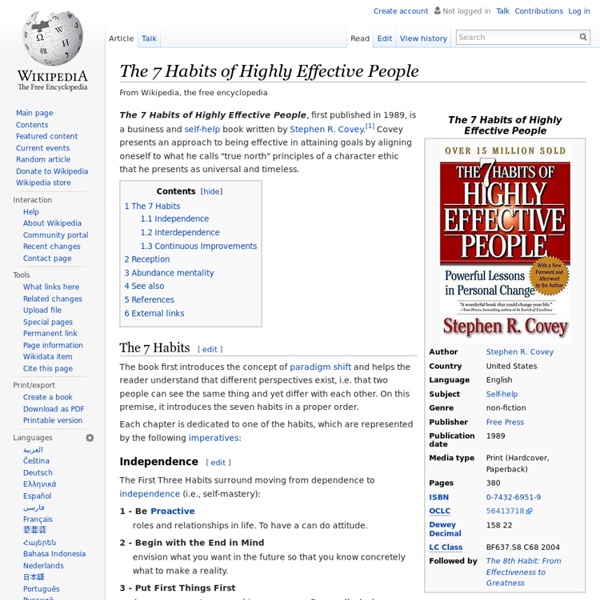 The 7 Habits of Highly Effective People, first published in 1989, is a business and self-help book written by Stephen R. Covey.[1] Covey presents an approach to being effective in attaining goals by aligning oneself to what he calls "true north" principles of a character ethic that he presents as universal and timeless. The 7 Habits[edit] The book first introduces the concept of paradigm shift and helps the reader understand that different perspectives exist, i.e. that two people can see the same thing and yet differ with each other. On this premise, it introduces the seven habits in a proper order. Each chapter is dedicated to one of the habits, which are represented by the following imperatives: Independence[edit] The First Three Habits surround moving from dependence to independence (i.e., self-mastery): 1 - Be Proactive roles and relationships in life. 2 - Begin with the End in Mind envision what you want in the future so that you know concretely what to make a reality. 4 - Think Win-Win

Tit for tat In Western business cultures, a handshake when meeting someone is an example of initial cooperation. Tit for tat is an English saying meaning "equivalent retaliation". It is also a highly effective strategy in game theory for the iterated prisoner's dilemma. The strategy was first introduced by Anatol Rapoport in Robert Axelrod's two tournaments,[1] held around 1980. Notably, it was (on both occasions) both the simplest strategy and the most successful.[2] Getting Things Done The GTD method rests on the idea of moving planned tasks and projects out of the mind by recording them externally and then breaking them into actionable work items. This allows one to focus attention on taking action on tasks, instead of on recalling them. First published in 2001, a revised edition of the book was released in 2015 to reflect the changes in information technology during the preceding decade and incorporate recent scientific research supporting the system's claims regarding how the mind functions.[2]

What are signs that a church is becoming secular? by Matt Slick "For the grace of God has appeared, bringing salvation to all men, 12instructing us to deny ungodliness and worldly desires and to live sensibly, righteously and godly in the present age," (Titus 2:11-12). What does a secular church look like? Would it be easy to find one? Communications Lessons from the Tillman and Lynch Revelations - Kathy Bloomgarden by Kathy Bloomgarden | 4:15 PM April 27, 2007 Today’s Conversation Starter comes from Kathy Bloomgarden, CEO of public relations giant Ruder-Finn, and author of Trust: The Secret Weapon of Effective Business Leaders. Bloomgarden offers her thoughts on the recent revelations about Pat Tillman and Jessica Lynch from a communications perspective.

All about flow Mihaly Csikszentmihalyi, author of “Flow: The Psychology of Optimal Experience,” describes flow as “being completely involved in an activity for its own sake. The ego falls away. Time flies. Every action, movement, and thought follows inevitably from the previous one, like playing jazz. Prisoner's dilemma The prisoners' dilemma is a canonical example of a game analyzed in game theory that shows why two individuals might not cooperate, even if it appears that it is in their best interests to do so. It was originally framed by Merrill Flood and Melvin Dresher working at RAND in 1950. Albert W. Tucker formalized the game with prison sentence rewards and gave it the name "prisoner's dilemma" (Poundstone, 1992), presenting it as follows: Two members of a criminal gang are arrested and imprisoned. Each prisoner is in solitary confinement with no means of speaking to or exchanging messages with the other.

Google Calendar Google Calendar is a free time-management web application offered by Google. It became available on April 13, 2006, and exited the beta stage in July 2009. Users are required to have a Google Account in order to use the software. Features[edit] Interface[edit] 9 Steps to Help Youth Activate Their Dreams and Aspirations Leave a Comment Posted on September 18, 2014 by Jimmy Newson I recently co-hosted a Kickstarter launch party for our documentary film, A Billion Entrepreneurs, in Dallas and New York City. What Google Taught Me About Personal Communication - Stew Friedman by Stew Friedman | 11:22 PM May 27, 2008 A couple of weeks ago I had the pleasure of speaking in the Leading@Google series at the company’s storied Mountain view campus. It is a remarkable place. Yes, the food is amazing, and it’s everywhere (you are always within 100 feet of free, fantastic fare). Yes, the surfaces are ecologically sound and the use of energy is minimal.

Trust (social sciences) In a social context, trust has several connotations.[1] Definitions of trust[2][3] typically refer to a situation characterised by the following aspects: One party (trustor) is willing to rely on the actions of another party (trustee); the situation is directed to the future. In addition, the trustor (voluntarily or forcedly) abandons control over the actions performed by the trustee. As a consequence, the trustor is uncertain about the outcome of the other's actions; they can only develop and evaluate expectations.

Calendaring software Calendaring software is software that minimally provides users with an electronic version of a calendar. Additionally, the software may provide an appointment book, address book, and/or contact list. These tools are an extension of many of the features provided by time management software such as desk accessory packages and computer office automation systems. Calendaring is a standard feature of many PDAs, EDAs, and smartphones. The software may be a local package designed for individual use (e.g. Lightning extension for Mozilla Thunderbird, Microsoft Outlook without Exchange Server, or Windows Calendar) or may be a networked package that allows for the sharing of information between users (e.g.

100 Things Every 20-Something Needs To Realize In 2015 Every new year we make promises to ourselves to make significant changes in our lives in the upcoming 365 days. We all have our resolution or list of resolutions — even if it’s only a mental list. Making changes — lasting changes — isn’t a simple task because it doesn’t just require a change in action, it requires a change in mindset. But how can you change your mindset unless you understand what your mindset truly is? That’s why I recommend writing down realizations and theories you have on just about everything and anything going on in your life or on life itself.