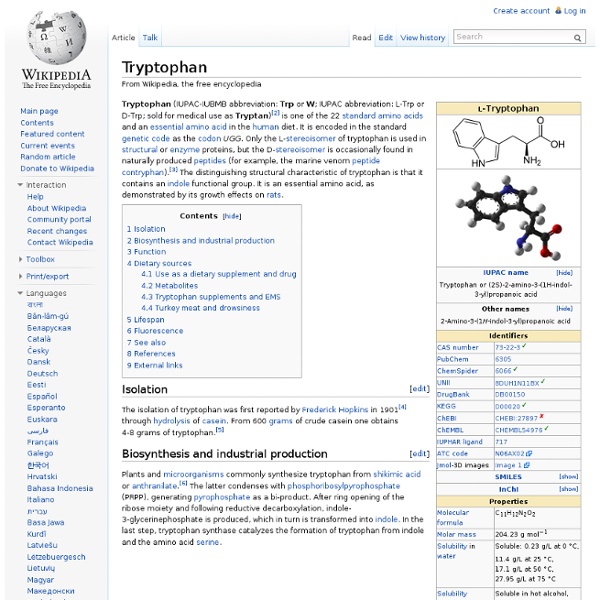 Tryptophan (IUPAC-IUBMB abbreviation: Trp or W; IUPAC abbreviation: L-Trp or D-Trp; sold for medical use as Tryptan)[2] is one of the 22 standard amino acids and an essential amino acid in the human diet, as demonstrated by its growth effects on rats. It is encoded in the standard genetic code as the codon UGG. Only the L-stereoisomer of tryptophan is used in structural or enzyme proteins, but the R -stereoisomer is occasionally found in naturally produced peptides (for example, the marine venom peptide contryphan).[3] The distinguishing structural characteristic of tryptophan is that it contains an indole functional group. Isolation[edit] The isolation of tryptophan was first reported by Frederick Hopkins in 1901[4] through hydrolysis of casein. Biosynthesis and industrial production[edit] Plants and microorganisms commonly synthesize tryptophan from shikimic acid or anthranilate.[6] The latter condenses with phosphoribosylpyrophosphate (PRPP), generating pyrophosphate as a by-product. Related:  Psychoactive Alkaloids

Psilocin Psilocin (also known as 4-OH-DMT, psilocine, psilocyn, or psilotsin), is a substituted tryptamine alkaloid and a serotonergic psychedelic substance. It is present in most psychedelic mushrooms together with its phosphorylated counterpart psilocybin. Psilocin is a Schedule I drug under the Convention on Psychotropic Substances.[2] The mind-altering effects of psilocin are highly variable and subjective and resemble those of LSD and DMT. Chemistry[edit] Psilocin and its phosphorylated cousin, psilocybin, were first isolated and named in 1958 by Swiss chemist Albert Hofmann. Psilocin is relatively unstable in solution due to its phenolic hydroxy (-OH) group. Structural analogs[edit] Sulphur analogs are known with a benzothienyl replacement[4] as well as 4-SH-DMT.[5] N1-methylpsilocin is a functionally 5-HT2C receptor preferring agonists.[6] 4-fluoro-N,N-dimethyltryptamine is known.[6] O-Acetylpsilocin is an acetylized analog of psilocin, also known as 4-AcO-DMT. Pharmacology[edit]

Myristicin Myristicin is a phenylpropene, a natural organic compound present in small amounts in the essential oil of nutmeg and to a lesser extent in other spices such as parsley and dill. It is insoluble in water, but soluble in ethanol and acetone.[1] Uses[edit] Nutmeg has psychoactive properties at doses much higher than used in cooking. In case reports, raw nutmeg produced anticholinergic-like symptoms, attributed to myristicin and elemicin.[2][3][4] In case reports, intoxications with nutmeg had effects that varied from person to person, but were often reported to be an excited and confused state with headaches, nausea and dizziness, dry mouth, bloodshot eyes and memory disturbances. Recreational use of nutmeg has caused poisoning, requiring medical treatment, characterized by nausea, vomiting, collapse, tachycardia, dizziness, anxiety, headache, hallucinations and irrational behavior. Pharmacology[edit] [edit] See also[edit] Elemicin References[edit] Jump up ^ "Myristicin".

Serotonin Serotonin /ˌsɛrəˈtoʊnɨn/ or 5-hydroxytryptamine (5-HT) is a monoamine neurotransmitter. Biochemically derived from tryptophan, serotonin is primarily found in the gastrointestinal tract (GI tract), platelets, and the central nervous system (CNS) of animals, including humans. It is popularly thought to be a contributor to feelings of well-being and happiness.[6] Serotonin secreted from the enterochromaffin cells eventually finds its way out of tissues into the blood. There, it is actively taken up by blood platelets, which store it. When the platelets bind to a clot, they release serotonin, where it serves as a vasoconstrictor and helps to regulate hemostasis and blood clotting. In addition to animals, serotonin is found in fungi and plants.[10] Serotonin's presence in insect venoms and plant spines serves to cause pain, which is a side-effect of serotonin injection. Functions[edit] Receptors[edit] Gauge of food availability (appetite)[edit] Effects of food content[edit] [edit]

Nitrotyrosine Nitrotyrosine is a product of tyrosine nitration mediated by reactive nitrogen species such as peroxynitrite anion and nitrogen dioxide. Nitrotyrosine is identified as an indicator or marker of cell damage, inflammation as well as NO (nitric oxide) production. Nitrotyrosine is ifs formed in the presence of the active metabolite NO. beta-Carboline β-Carboline (9H-pyrido[3,4-b]indole) also known as norharmane is a nitrogen containing heterocycle. It is also the prototype of a class of compounds known as β-carbolines. Pharmacology[edit] β-Carboline alkaloids are widespread in plants and animals, and frequently act as benzodiazepine inverse agonists. Structure[edit] Examples of β-carbolines[edit] Some of the more important β-carbolines are tabulated by structure below. Occurrence in nature[edit] Eight plant families are known to express 64 different kinds of β-carboline alkaloids. As a result of the presence of β-carbolines in the cuticle of scorpions, their skin is known to fluoresce when exposed to certain wavelengths of ultraviolet light such as that produced by a blacklight.[6] See also[edit] References[edit] Jump up ^ Venault P, Chapouthier G (2007). External links[edit]

Diethyltryptamine Chemistry[edit] DET is an analogue of the common tryptamine hallucinogen N,N-Dimethyltryptamine or DMT. Pharmacology[edit] The mechanism of action is thought to be serotonin receptor agonism, much like other classic psychedelics.[2] DET is sometimes preferred over DMT because it can be taken orally whereas DMT cannot. This is because the enzyme monoamine oxidase degrades DMT into an inactive compound before it is absorbed. Biochemistry[edit] Though DET is a synthetic compound with no known natural sources it has been used with mycelium of Psilocybe cubensis to produce the synthetic chemicals 4-PO-DET (Ethocybin) and 4-HO-DET (Ethocin), as opposed to the naturally occurring 4-PO-DMT (Psilocybin) and 4-HO-DMT (Psilocin). Psychosis model[edit] See also[edit] References[edit] External links[edit]

Melatonin Melatonin The hormone can be used as a sleep aid and in the treatment of sleep disorders. It can be taken orally as capsules, tablets, or liquid. It is also available in a form to be used sublingually, and there are transdermal patches. There have been few clinical trials, particularly long-term ones, in the use of melatonin in humans. Discovery[edit] Biosynthesis[edit] Melatonin biosynthesis involves four enzymatic steps from the essential dietary amino acid tryptophan, which follows a serotonin pathway. In bacteria, protists, fungi, and plants melatonin is synthesized indirectly with tryptophan as an intermediate product of the shikimic acid pathway. Regulation[edit] In vertebrates, melatonin secretion is regulated by norepinephrine. It is principally blue light, around 460 to 480 nm, that suppresses melatonin,[24] proportional to the light intensity and length of exposure. Animals[edit] Plants[edit] Functions[edit] Circadian rhythm[edit] Antioxidant[edit] Immune system[edit] Medical uses[edit]

S-Nitrosothiol Structure of an S–nitrosothiol. R denotes some organic group. S-Nitrosothiols, also known as thionitrites, are organic compounds or functional groups containing a nitroso group attached to the sulfur atom of a thiol.[1] S-Nitrosothiols have the general formula RSNO, where R denotes an organic group. S-Nitrosothiols have received much attention in biochemistry because they serve as donors of the nitrosonium ion NO+, and nitric oxide and some organic nitroso derivatives serve as signaling molecules in living systems, especially related to vasodilation.[2] Red blood cells, for instance, release S-nitrosothiols into the bloodstream under low-oxygen conditions, causing the blood vessels to dilate.[3] The addition of a nitroso group to a sulfur atom of an amino acid residue of some protein is known as S-nitrosation or S-nitrosylation. This is a reversible process and a major form of posttranslational modification of proteins.[4] Structure and reactions[edit] Detection[edit] Examples[edit]

5-MeO-DMT 5-MeO-DMT (5-methoxy-N,N-dimethyltryptamine) is a powerful psychedelic tryptamine. It is found in a wide variety of plant and psychoactive toad species and, like its close relatives DMT and bufotenin (5-HO-DMT), it has been used as an entheogen by South American shamans for thousands of years.[citation needed] Chemistry[edit] History[edit] Traditionally 5-MeO-DMT has been used in psychedelic snuff made from virola bark resin, and may be a trace constituent of ayahuasca when plants such as Diplopterys cabrerana are used as an admixture. 5-MeO-DMT is also found in the venom of the Colorado River toad (Bufo alvarius), although there is no direct evidence this was used as a hallucinogen until recent times. Religious use[edit] 5-MeO-DMT is a sacrament of the Church of the Tree of Life. Pharmacology[edit] Use and effects[edit] Although similar in many respects to its close relatives DMT and bufotenin (5-OH-DMT), the effects are typically not as visual. Positive[edit] Neutral[edit] Negative[edit] S.