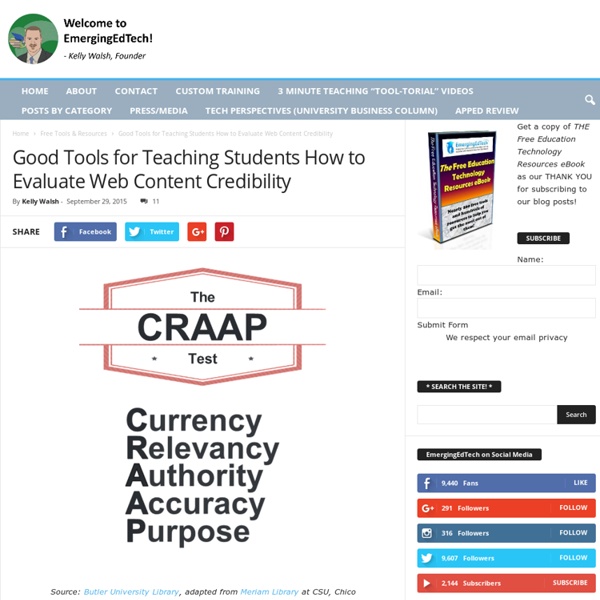 Source: Butler University Library, adapted from Meriam Library at CSU, Chico One of my favorite lessons to teach is about evaluating the credibility of web sites and other digital content. I often start by showing the classic “Can't Lie On The Internet” video from AllState, which gets a laugh and helps to get students in the right mind set. Next, we check out the classic “DHMO” site and talk about what we see there. Dihydrogen Monoxide sounds pretty scary, but is this site legitimate? That's when I bring up Kathy Schrock's 5 W's PDF and use it as a kick off point to discuss the idea of using criteria for evaluation, not just gut reactions. Another tool I came across recently that I like is this 60 Second Guide for evaluating web resources. There are countless resources on the web for evaluating content credibility, and it is easy to get a bit overwhelmed. The Challenges of Video and Social Media Credibility Another Great Resource: Snopes.com

Lesson Plan: How to Spot Fake News The problem of fake news came to a dizzying head in 2016 when a man fired a shot in a family pizzeria as he “self-investigated” a false report of a child abuse ring led by top democrats. A BuzzFeed report confirmed that fake news stories, such as the one that claimed Hillary Clinton sold arms to ISIS, were actually viewed more times than articles from established and legitimate news sources. Did fake news have an impact on the election? How do we address the problem from here? This lesson plan features a Channel One News report on the problem.

How to Spot Fake News - FactCheck.org Fake news is nothing new. But bogus stories can reach more people more quickly via social media than what good old-fashioned viral emails could accomplish in years past. Concern about the phenomenon led Facebook and Google to announce that they’ll crack down on fake news sites, restricting their ability to garner ad revenue. Search, fake news and politics - an international study How are people using search, social media and other forms of media to get information about politics, politicians and political issues? Are we right to be worried about the impact search algorithms have on shaping political opinions or about inaccurate, false and politically biased information that distorts public opinion? A study, conducted jointly by researchers from the Oxford Internet Institute (University of Oxford) and the Quello Center (Michigan State University) questioned 14,000 internet users from France, Germany, Italy, Poland, Spain, the UK and the USA about how they used traditional and online media.

The tricks propagandists use to beat science Back in the 1950s, health professionals became concerned that smoking was causing cancer. Then, in 1952, the popular magazine Reader’s Digest published “Cancer by the Carton,” an article about the increasing body of evidence that proved it. The article caused widespread shock and media coverage. Critical thinking is a key skill in media and information literacy, and the mission of libraries is to educate and advocate its importance. Discussions about fake news has led to a new focus on media literacy more broadly, and the role of libraries and other education institutions in providing this. When Oxford Dictionaries announced post-truth was Word of the Year 2016, we as librarians realise action is needed to educate and advocate for critical thinking – a crucial skill when navigating the information society. IFLA has made this infographic with eight simple steps (based on FactCheck.org’s 2016 article How to Spot Fake News) to discover the verifiability of a given news-piece in front of you. Download, print, translate, and share – at home, at your library, in your local community, and on social media networks. The more we crowdsource our wisdom, the wiser the world becomes.

American Libraries Magazine Librarians—whether public, school, academic, or special—all seek to ensure that patrons who ask for help get accurate information. Given the care that librarians bring to this task, the recent explosion in unverified, unsourced, and sometimes completely untrue news has been discouraging, to say the least. According to the Pew Research Center, a majority of US adults are getting their news in real time from their social media feeds. These are often uncurated spaces in which falsehoods thrive, as revealed during the 2016 election. To take just one example, Pope Francis did not endorse Donald Trump, but thousands of people shared the “news” that he had done so. Completely fake news is at the extreme end of a continuum.

"fake news" not new 2 clicks Donald Trump may well be remembered as the president who cried “fake news.” It started after the inauguration, when he used it to discredit stories about the size of the crowd at his inauguration. He hasn’t let up since, labeling any criticism and negative coverage as “fake.” Just in time for awards season, he rolled out his “Fake News Awards” and, in true Trumpian fashion, it appears he is convinced that he invented the term.