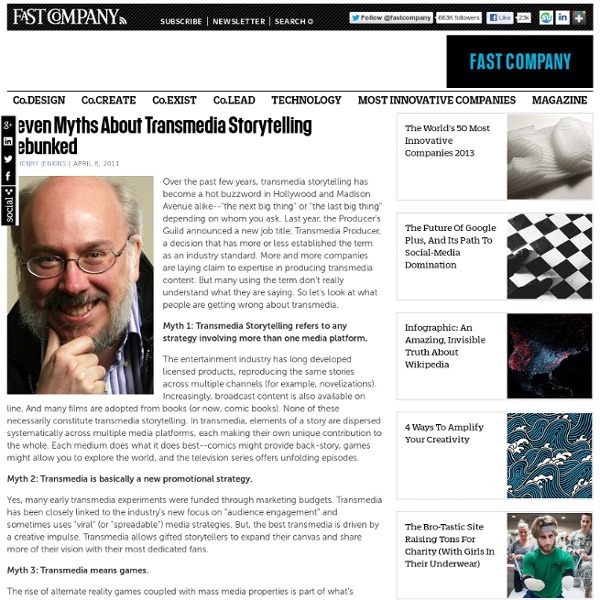 Over the past few years, transmedia storytelling has become a hot buzzword in Hollywood and Madison Avenue alike--"the next big thing" or "the last big thing" depending on whom you ask. Last year, the Producer's Guild announced a new job title, Transmedia Producer, a decision that has more or less established the term as an industry standard. More and more companies are laying claim to expertise in producing transmedia content. But many using the term don't really understand what they are saying. So let's look at what people are getting wrong about transmedia. Myth 1: Transmedia Storytelling refers to any strategy involving more than one media platform. The entertainment industry has long developed licensed products, reproducing the same stories across multiple channels (for example, novelizations). Myth 2: Transmedia is basically a new promotional strategy. Yes, many early transmedia experiments were funded through marketing budgets. Myth 3: Transmedia means games.

Ocean Marketing: How to self-destruct your company with just a few measly emails [update] Update: A representative for the Avenger Controller (a new one, obviously) has released an official statement regarding Ocean Marketing’s involvement with their product and the actions of Paul Christoforo. Original story: Strap yourself in, you’re about to witness the most outlandlish PR blunder in video gaming history. And trust me, there have been many… From VentureBeat Customers don’t just get irritated when you screw up cross-channel personalization.

Jeff Gomez on Transmedia Producing - Producers Guild of America Jeff Gomez, Member-At-Large of the PGA East Executive Board and CEO of Starlight Runner Entertainment, has been creating engrossing interactive environments since he was a teenager. In his recent presentation at the TEDx Transmedia event in Geneva, Switzerland, Gomez talks about how he was able to leverage his creativity and experience to become one of the most important producers specializing in transmedia storytelling. Whether he’s expanding the story of a pre-existing universe like he did with the transmedia campaign for James Cameron’s Avatar or creating enthralling worlds for Acclaim Entertainment and The Walt Disney Company, Gomez has not only embraced the opportunities of cross-platform storytelling but also continues to define the methods that transmedia producers will use for many years to come. We had a chance to connect with Gomez after the conference and ask him a few questions about the challenges facing transmedia producers.

Transmedia Storytelling is Bullshit... I love a good provocative statement but the particular one that leads off this post is one i feel somewhat justified and qualified to make. Such proclamations are usually reserved for the traditionalists from old media that ‘just don t get it’. I am certainly no such person having spent a good proportion of my professional career writing producing and developing in new media spheres.

A VC: Marketing You asked for it Arnold and 84 others (so far). So I'm gonna talk about marketing. I believe that marketing is what you do when your product or service sucks or when you make so much profit on every marginal customer that it would be crazy to not spend a bit of that profit acquiring more of them (coke, zynga, bud, viagra). A very experienced and successful entrepreneur came into our office a week ago to pitch his latest company. Cross-Media + Transmedia Entertainment Jill Walker, the theorist behind ‘distributed narrative‘, has organised and participated in a panel on Viral and Distributed Narratives (as arranged by Jessica Henig). The panel is part of the Society for Literature, Science, and the Arts 19th Annual Conference held recently in Chicago. It is the first time that electronic literature has been included in the conference streams.

Twilight studio Lionsgate partners with Telltale Games for transmedia ‘Super Shows’ - Gameplanet Australia A financial deal between Twilight movie studio Lionsgate and Telltale Games will see the companies co-develop ‘Super Shows’ – titles that are part TV, part game. Variety is reporting that Lionsgate has invested US$40m in The Walking Dead game creator to make the project a reality. In return, Lionsgate CEO Jon Feltheimer will join Telltale’s board of directors. Telltale’s first original IP will be a Super Show, which Telltale CEO Kevin Bruner described as one part of interactive playable content and one part of scripted television style content.

Tips, Tools and Techniques for Marketers Around the Globe In Go Mobile, the book I’ve written with Jeanne Hopkins from HubSpot, we review a list of the 14 most powerful words in marketing so that readers can use them in their mobile marketing campaigns. This post gives you a sneak peak at the list that’s included in the book. Enjoy. Have you ever bought a product that you didn’t really need? You know the kind — they’re often found in the aisle displays at Lowe’s, WalMart or Barnes & Noble. You grab it off the shelf, pay for it, then get home and say, “Why did I just buy something I didn’t really need?”

Transmedia Resources DRAFT - this is a no-profit site that is a continuous work in progress - short quotes from the collected resources are included, if you do not wish any of your resource quoted, let me know and I'll remove the quote docwho2100@gmail.com UPDATE - April 6, 2014 - It has been awhile - but I still am around, still have been collecting sources and still intend to continue plugging things in. Hope to start adding more again within the month - ahhh the life of an archivist!!! Transmedia is used in many different ways leading to the need to use the surrounding context to determine full meaning (in a way, the very definition of transmedia has a transmedial property to it ;) A very basic definition would be one of media delivered in multiple formats/platforms.

Transmedia Storytelling (Fall 2010) The main characters in Doctor Who don't change every episode, but this isn't necessarily wrong. Just look at Star Trek for an example of a show that doesn't require character development to be good or engaging. While all of the Dr. Who storytelling outlets were appealing in their own way, I found the radio program to be the least engaging. I don’t think this has anything to do with its radio’s validity as a medium or the producers’ execution of the story, but rather I think I’m just not accustomed to consuming audio-only stories. We’ve grown up learning how to comprehend visual stories on television and movies, or to properly understand and dissect the written word.