7 Ways to Have More by Owning Less 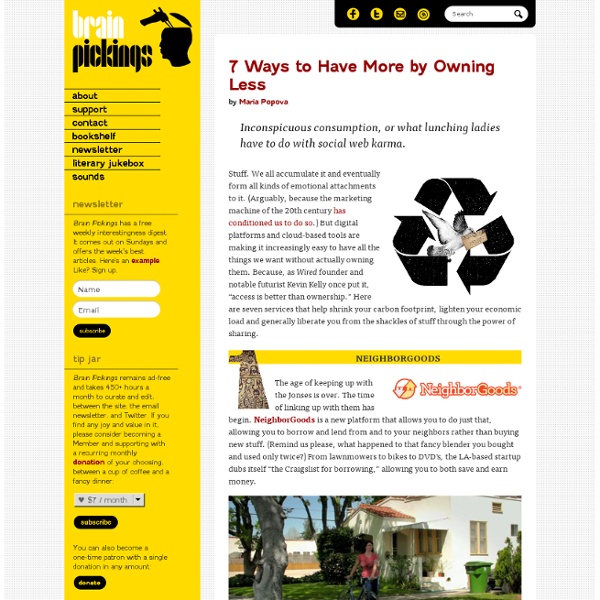 by Maria Popova Inconspicuous consumption, or what lunching ladies have to do with social web karma. Stuff. The age of keeping up with the Jonses is over. Transparent user ratings, transaction histories and privacy controls make the sharing process simple and safe, while automated calendars and reminders ensure the safe return of loaned items. Give NeighborGoods a shot by creating a sharing group for your apartment building, campus, office, or reading group — both your wallet and your social life will thank you. UPDATE: Per the co-founder’s kind comment below, we should clarify that NeighborGoods also allows you to import your Twitter and Facebook friends from the get-go, so you have an instant group to share with. Similarly to Neighborgoods, SnapGoods allows you to rent, borrow and lend within your community. You can browse the goods people in your area are lending or take a look at what they need and lend a hand (or a sewing machine, as may be the case) if you’ve got the goods. Related:  brainpickings

7 Image Search Tools That Will Change Your Life by Maria Popova What martinis have to do with reverse art lookup and obscure German calendars from the 1990’s. Although Google has been playing with some fun image search toys in its lab and the official Google Image Search has recently significantly upped its game, some of its most hyped features — color search, instant scrolling, hover preview — are but mere shadows of sleeker, better versions that geekier, more sophisticated image search tools offer. Here are seven of our favorites. oSkope is a visual search assistant that lets you browse images and products from popular sites like Amazon, eBay, YouTube and Flickr in a highly intuitive way. Thanks, Amrit! CompFight is a Flickr search tool tremendously useful for all your comp stock image needs but also doubling as a visual inspiration ignition engine. CompFight was featured in the Experimental category of this year’s Communication Arts annual. We first featured Cooliris nearly three years ago, when it was still called PicLens.

Search for organic food, hemp, organic cotton, and enjoy organic beauty care. 7 Must-Read Books on the Art & Science of Happiness by Maria Popova From Plato to Buddha, or what imperfection has to do with the neuroscience of the good life. If you, like me, are fascinated by the human quest to understand the underpinnings of happiness but break out in hives at the mere mention of self-help books, you’re in luck: I’ve sifted through my personal library, a decade’s worth of obsessive reading, to surface seven essential books on the art and science of happiness, rooted in solid science, contemporary philosophy and cross-disciplinary insight. From psychology and neuroscience to sociology and cultural anthropology to behavioral economics, these essential reads illuminate the most fundamental aspiration of all human existence: How to avoid suffering and foster lasting well-being. The question of what makes us happy is likely as old as human cognition itself and has occupied the minds of philosophers, prophets and scientists for millennia. Human rationality depends critically on sophisticated emotionality. Donating = Loving

s Homemade Soap Recipe by Robert Wayne Atkins Grandpappy's Homemade Soap Recipe Copyright © 2007,2008 by Robert Wayne Atkins, P.E. All rights reserved and all rights protected under international copyright law. Click Here for a Microsoft WORD printer friendly copy of this article. Introduction During hard times sooner or later everyone runs out of soap. To make soap you only need three things: rainwater,cold ashes from any hardwood fire, andanimal fat from almost any type of animal, such as a cow, pig, goat, sheep, bear, beaver, raccoon, opossum, groundhog, etc. Soap is not difficult to make and it does not require any special equipment. Soap is a "perfect consumer product" for the following five reasons: Soap is a legal product.Everyone everywhere uses soap.Soap is completely used up in a short period of time.When people run out of soap they want to buy more.Soap is relatively low in price so almost everyone can afford it. There are three major differences between homemade soap and commercial quality soap: Basic Soap Making Equipment

thxthxthx: The Art of Finding Happiness in Everyday Gratitude by Maria Popova What laundry and bee stings have to do with the secret of happiness. We live in a culture with far, far too much pessimism, cynicism and dystopianism going around. I’ve been a longtime fan of Leah Dieterich‘s fantastic THXTHXTHX thank-you-note-a-day blog and, this week, it’s joining this running list of blog-turned-book success stories with the publication of the truly wonderful book of the same name, thxthxthx: Thank Goodness for Everything — a lovely compendium of everyday gratitude in the form of 200 of Dieterich’s original handwritten thank-you notes on everything from clean sheets to empty bars to the “th” sound. Sometimes funny, sometimes poignant, sometimes vulnerable, and always profoundly human, the notes are a gentle, non-preachy reminder that, heck, we’re incredible beings living in an incredible world and why oh why do we make such a tragic habit of forgetting that? Donating = Loving Bringing you (ad-free) Brain Pickings takes hundreds of hours each month.

Larry Malerba, D.O. : Homeopathic Arnica to the Rescue Known for its remarkable healing properties, Arnica montana has been used for centuries to treat the effects of accidents and injuries. The name refers to the genus and species of the yellow flowering plant, which is endemic to the mountains of Central Europe. This plant is sometimes referred to as Leopard's Bane and is popularly known as the Mountain Daisy in homeopathic usage. Thousands of physicians and millions of patients around the globe have successfully used Arnica to treat the bruising, soreness, inflammation and swelling that results from all types of physical trauma. Savvy consumers are demanding safe, non-toxic treatments and homeopathic Arnica may represent one of the best options available due to its reputation for safety, effectiveness, ease of use and broad applicability. Clearing Up Some Misconceptions: Most of the general public is pretty well acquainted with herbal products. Indications for Homeopathic Arnica: Guidelines for Administering Homeopathic Arnica: References:

Incognito: David Eagleman Unravels the Secret Lives of the Brain by Maria Popova What seeing rainbows has to do with artificial intelligence and the biology of infidelity. Sum: Forty Tales from the Afterlives by neuroscientist David Eagleman is one of my favorite books of the past few years. So, as a proper neuro-nut, it’s no surprise I was thrilled for this week’s release of his latest gem, Incognito: The Secret Lives of the Brain — a fascinating, dynamic, faceted look under the hood of the conscious mind to reveal the complex machinery of our subconscious. The three-pound organ in your skull — with its pink consistency of Jell-o — is an alien kind of computational material. Sample some of Eagleman’s fascinating areas of study with this excellent talk from TEDxAlamo: Equal parts entertaining and illuminating, the case studies, examples and insights in Incognito are more than mere talking points to impressed at the next dinner party, poised instead to radically shift your understanding of the world, other people, and your own mind. Share on Tumblr

Hydrogen Peroxide Claim: Hydrogen peroxide will cure a variety of ailments. Example:[Collected via e-mail, 2006] I would like to tell you of the benefits of that plain little O'l bottle of you can get for under $1.00 at any drug store. My husband has been in the medical field for over and most doctors don't tell you about peroxide, or they would lose thousands of dollars. 1. Take one capful (the little white cap that comes with the bottle) and hold in your mouth for daily, then spit it out. 2. 3. 4. 5. 6. 7. 8. 9. 10. 11. 12. 13. I could go on and on. Origins: Hydrogen peroxide is a first aid staple in many households, routinely used to disinfect small wounds. removal. Higher concentrations (30% or greater) of hydrogen peroxide are used in industry as a bleach for textiles and paper, as a component of rocket fuels, and for producing foam rubber and organic chemicals. recommendations. Hydrogen peroxide can be harmful if swallowed. Hydrogen peroxide injections can have dangerous side effects.

Creative Cartography: 7 Must-Read Books about Maps by Maria Popova From tattoos to Thomas More’s Utopia, or what Moby Dick has to do with the nature of time. We’re obsessed with maps — a fundamental sensemaking mechanism for the world, arguably the earliest form of standardized information design, and a relentless source of visual creativity. Today, we turn to seven fantastic books that explore the art and science of cartography from seven fascinating angles. Map As Art, The: Contemporary Artists Explore Cartography is the definitive overview of today’s bravest, boldest creative cartography, featuring 360 colorful creations by well-known artists and emerging visual experimenteurs alike, including Brain Pickings favorites Maira Kalman, Paula Scher and Olaful Eliasson. Matthew Cusick, 'Fiona’s Wave,' 2005 Cusick's oversized collages are painted with fragments of vintage atlases and school geography books from the golden era of cartography, 1872-1945. Qin Ga, 'Site 22: Mao Zedong Temple,' 2005 We reviewed it in full here. Donating = Loving