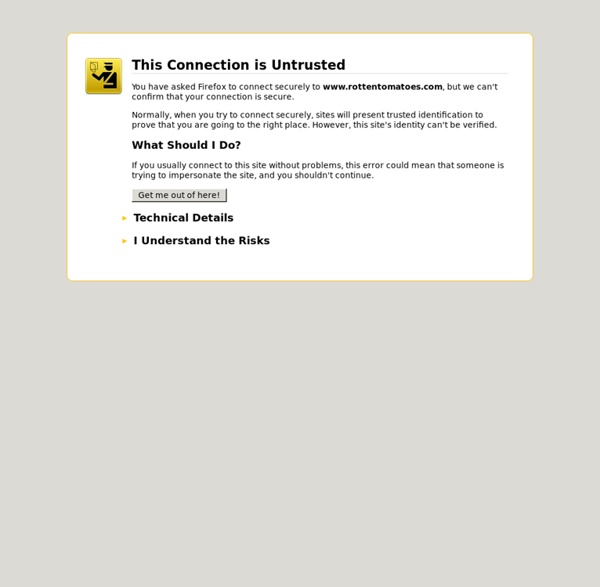 100 Things Personality Test - VisualDNA VisualDNA brings a new layer of information to the world of technology that will help bring it closer to the people who use it – making it more enjoyable and relevant. Technology provides businesses with a surfeit of DATA – what and when. However it provides very little in the way of UNDERSTANDING – who did things, and why they did them. Top Ten Films 1930-2009 - StumbleUpon 2015 1. MAD MAX: FURY ROAD (George Miller) 2. MY GOLDEN DAYS (Arnaud Desplechin) 3. Best Movies (of All-Time) The best movies evoke tears, laughter, terror, reminiscence, and/or mystery in a truly personal way. Anything less (AKA, around 98% of all movies) serves no purpose other than to shove mindless, forgettable fodder in our face and line Hollywood’s pockets (Be afraid Michael Bay, be VERY afraid). This is that other, sacred 2%—the Holy Grail of cinema.

Clever Ads Billboard Here is a series of brilliant billboard ads dedicated to promoting science in Vancouver, by Science World Museum in collaboration with Rethink Canada… World museum – Rethink Canada 100 Best Comedy Movies - Film Here's the 100 best comedy movies as chosen by more than 200 people whose job it is to make you laugh. We spoke to dozens of comedy writers, comedy directors, comic actors and stand-up comedians – including Dan Aykroyd, Richard Curtis, Edgar Wright, Kim Noble, Stephen Merchant, Jo Brand and many, many more – and asked them to share with us their favourite comedy films of all time. Can you guess which film emerged as the number one choice? UPDATE: Tell us the comedy movie you think should have made the list and we'll print the best ten in a future issue of Time Out magazine.

List of common misconceptions From Wikipedia, the free encyclopedia This incomplete list is not intended to be exhaustive. This list corrects erroneous beliefs that are currently widely held about notable topics. Each misconception and the corresponding facts have been discussed in published literature. Note that each entry is formatted as a correction; the misconceptions themselves are implied rather than stated. Arts and culture

THE TERRY GILLIAM SCHOOL OF FILM: 10 LESSONS FOR DIRECTORS TODAY “Billy Wilder once said that there are only two things aging directors can’t avoid…awards and haemorroids [sic]. I’ll stick with just the awards for the moment, please.” So says a recent Facebook post from the brain behind some of the greatest films of the last century, from Monty Python and the Holy Grail to Brazil to The Adventures of Baron Munchausen. Yes, Terry Gilliam has joined Facebook, as an experiment to promote his latest venture, the short film The Wholly Family, about Italian Pulcinella figurines coming to life inside a small boy’s imagination. (I highly recommend following his status updates). Fortunately for Gilliam, he’s on the awards path, recently honored with the Golden Star Award of the 11th Annual Marrakesh International Film Festival.

Online Books : "The Essential Psychedelic Guide" - Psychedelic Safety The natural psychedelics have been in use for thousands of years, and I anticipate that both synthetic and natural psychedelics will still be used thousands of years from now. Contrary to being considered dangerous, throughout most of history psychedelics have been considered gifts of the Gods, and have been associated with the healing of the body, mind and soul. History is full of shamans and shamanesses who consumed these substances hundreds of times each year for their entire life and suffered no ill effects [1]. Likewise my thousand or so experiments with various psychedelics seem to have done no harm. To the contrary, I feel I've received numerous benefits from their use.

50 of the World’s Best Breakfasts from Around the World – Written by Victoria Philpott Not quite had your fill of breakfasts just yet? Check out our beautifully visual list of the 30 best breakfasts from around the world. Plan your next culinary adventure or just get a little adventurous with breakfast at the weekend. Salivating.

25 Spectacular Movies You (Probably) Haven’t Seen Midnight in Paris Woody Allen’s latest places starving writer Owen Wilson in Paris with his fiancée, Rachel McAdams. Searching for inspiration for his incomplete novel, Owen begins taking strolls around the city at night where he discovers an unexpected group of people. Starpath: Glow-in-the-Dark, Energy-Efficient Technology to Illuminate Streets at Night Keeping parks well lit at night can be a costly means to ensure pedestrian and cyclist safety. But a British-based company has come up with a way to turn park paths into glow-in-the-dark thoroughfares that double as energy-efficient works of art. Created by Pro-Teq, Starpath is a sprayable coating of light-absorbing particles that harvests ultra-violet rays from the sun during the day and dramatically lights up like a starry sky at night. The veneer is non-reflective, anti-slip and waterproof, and can be applied to cement, wood, tarmac or other solid surfaces. Earlier this month, Starpath was tested on all 1,600 square-feet of the paths at Christ’s Pieces Park, in the university town of Cambridge.