Did He Just Play A Trance Song On A Guitar? 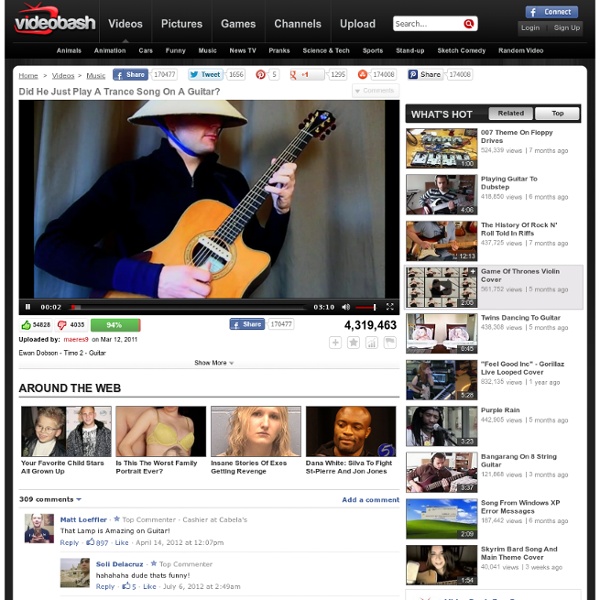 Japanese Museum Unveils A Giant Globe Made of 10,000 Live-Updating OLED Panels Geo-Cosmos If you want to see what Earth looks like from space, become an astronaut (or, barring that, a space tourist). For the next best view, pay a visit to Tokyo’s National Museum of Emerging Science and Innovation where a massive, nearly 20-foot spherical OLED orb--the world’s first large scale spherical OLED --offers a satellite’s-eye view of the planet in super high resolution. “Geo-Cosmos” is made up of 10,362 OLED panels that display continuously-updating satellite footage of our tiny blue marble, representing what our planet looks like from space in something close to realtime. It replaces an earlier model covered in LED panels, offering museum-goers a full 10 million pixels, a resolution 10 times greater than its predecessor. And like any good museum exhibit, Geo-Cosmos is interactive.

This Will Make You Fall In Love! Level 1 Congratulations! You leveled up, but you aren't logged in so we can't save your points. Login Sign Up Share13.4K Tweet168 Share112 Share7 Stumble3 Share13.7K Money really cant buy happiness - in the long-term at least - Lifestyle It's an old adage that we usually quote but don't really believe. "Money doesn't buy happiness." However, now a new study by an economist has found it to be true. A new collaborative paper by Richard Easterlin - namesake of the 'Easterlin Paradox' and founder of the field of happiness studies - offers the broadest range of evidence to date demonstrating that a higher rate of economic growth does not result in a greater increase of happiness.

SWITL scoops oozy goop with amazing robotic precision (video) Look, sometimes, not often, but sometimes we'll miss a truly spectacular and mind bending story that requires a double-back. The SWITL robotic hand is just such a case. The patent-pending technology looks to have been revealed on video back in late October showing the Furukawa Kikou robot deftly lifting a ketchup and mayonnaise mess from a table and then replacing it unchanged from its original shape. The tech was developed for bakeries with the intention of automating the handling of soft substances that were either too malleable or too icky for human hands. Unfortunately, Furukawa Kikou isn't providing any details about the science behind SWITL so we'll just assume that it's Satan's work until otherwise informed.

Archive Tear Down That Wall by Christopher Hitchens February 12, 2013 Print: Slate Christopher Hitchens’ 2010 article calling for the prosecution of the Catholic priests who abused children, and the men who covered it up. Gardening Tips - 7 Habits of Successful Gardeners - The Daily Green Originally published January 2009 Or is it the Seven Pillars of Horticultural Wisdom? As everyone's resolutions remind us, we love attaching a number to advice, a number smaller than the one I regard as most realistic: The Twenty Three Thousand Four Hundred and Sixty-Two Things It's Important to Remember Before Getting Out of Bed. So be warned: I haven't really honed it down to only seven; these are just the first seven essentials that came to mind when I decided to do this. And not in order, either. Make CompostUse CompostPlant Crops in Wide BedsMulchFeed the Soil, Not the PlantsShare SomethingBe There

IdeaPaint: Turn Your Entire Office Into a Whiteboard Why didn't you think of this? John Goscha, at the ripe old age of 25 ditched a job offer at Goldman Sachs, and instead began marketing IdeaPaint, which is simply a paint that turns any paintable surface into a dry-erase board. The benefit--besides being able to brainstorm on almost every inch of your office--is that the paint is half the cost of whiteboard and better-performing--you can leave marks up indefinitely, and they won't stain the wall. Of course, it takes a bit of time--you may have to sand the wall and prime it--but one other benefit is that you're not incurring all the carbon involved in manufacturing and shipping a whiteboard. Hippie Havens Maine Industry, Maine - "Plenty of old hippies, die hard hippies, new hippies and a bunch of drunk ones too you. Ever hear of Hempstock? That's in the town right next to us. Then Harvestfest isn't too far away either."

New camera promises to capture your whole life - tech - 16 October 2009 A camera you can wear as a pendant to record every moment of your life will soon be launched by a UK-based firm. Originally invented to help jog the memories of people with Alzheimer's disease, it might one day be used by consumers to create "lifelogs" that archive their entire lives. Worn on a cord around the neck, the camera takes pictures automatically as often as once every 30 seconds. It also uses an accelerometer and light sensors to snap an image when a person enters a new environment, and an infrared sensor to take one when it detects the body heat of a person in front of the wearer. It can fit 30,000 images onto its 1-gigabyte memory. The ViconRevue was originally developed as the SenseCam by Microsoft Research Cambridge, UK, for researchers studying Alzheimer's and other dementias.

Italian Grilled Cheese Who doesn’t love a good grilled cheese? And, I know it’s totally Ameeeerican to make the classic: American cheese, mayonnaise and bread. But, why not change it a bit and use REALLY fresh and natural ingredients?!?!? Love it! Vicon Revue Introducing the next generation Revue. Revue 3MP has four times more storage and a 3 megapixel sensor. For detailed product information including new features, example images and a downloadable brochure click here . Revue is a digital camera designed to take photos without intervention whilst being worn by the user.

14 natural items for your alternative first aid kit Cloves. Photo by Elenadan Find out which multitasking natural remedies merit a spot in your backpack. IF YOU’VE COME TO trust in herbal and alternative medicine at home, it can be a hard decision to go back to Pepto-Bismol and Dayquil when you’re getting ready to go abroad. With these 14 items it’s easy to keep up that alternative health kick you’ve been on, even when you’re 5000 miles from home.