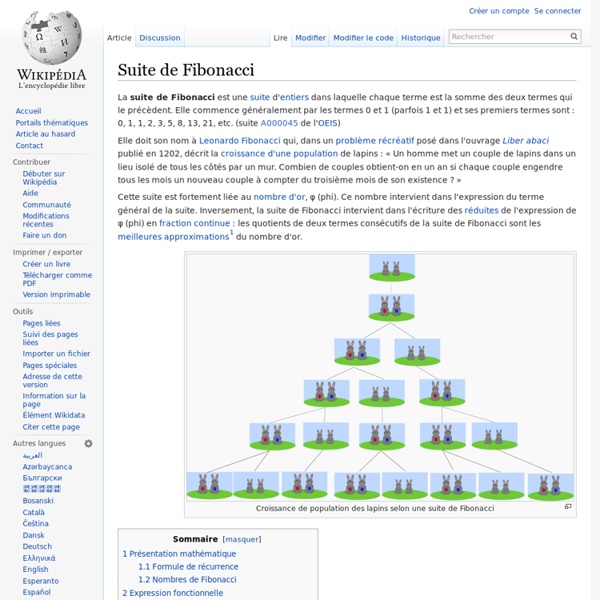 Fibonacci Leonardo Bonacci (c. 1170 – c. 1250)[2]—known as Fibonacci (Italian: [fiboˈnattʃi]), and also Leonardo of Pisa, Leonardo Pisano, Leonardo Pisano Bigollo, Leonardo Fibonacci—was an Italian mathematician, considered as "the most talented Western mathematician of the Middle Ages.".[3][4] Fibonacci introduced to Europe the Hindu–Arabic numeral system primarily through his composition in 1202 of Liber Abaci (Book of Calculation).[5] He also introduced to Europe the sequence of Fibonacci numbers (discovered earlier in India but not previously known in Europe), which he used as an example in Liber Abaci.[6] Life[edit] Fibonacci was born around 1170 to Guglielmo Bonacci, a wealthy Italian merchant and, by some accounts, the consul for Pisa. Guglielmo directed a trading post in Bugia, a port in the Almohad dynasty's sultanate in North Africa.

How to use AIDA Principles to Revitalize Your Content 174 Flares Twitter 93 Facebook 52 Google+ 17 StumbleUpon 2 Buffer 9 LinkedIn 1 inShare1 Pin It Share 0 Filament.io Made with Flare More Info 174 Flares × Go ahead and ask anyone in marketing as to what’s that one classic rule in writing copy or creating advertisements is, and they’ll always go back to A.I.D.A which stands for: The best part of the principle is that each of those parameters is like mandatory checkboxes for marketers. 10 More Unsolved Mysteries of the World Mysteries There is no doubt that some of our most popular lists are ones which revolve around mystery and intrigue. Fortunately for us all, there is no end to the number of weird and wonderful mysteries in the world, so we are now able to present our fourth list of unsolved mysteries. So – onwards to the world of the mysterious! Over the last few decades, miners in South Africa have been digging up mysterious metal spheres.

Pi Day: History of Pi Pi has been known for almost 4000 years—but even if we calculated the number of seconds in those 4000 years and calculated pi to that number of places, we would still only be approximating its actual value. Here’s a brief history of finding pi: The ancient Babylonians calculated the area of a circle by taking 3 times the square of its radius, which gave a value of pi = 3. One Babylonian tablet (ca. 1900–1680 BC) indicates a value of 3.125 for pi, which is a closer approximation. The Beauty of Mathematics: A Visual Demonstration of Math in Everyday Life This lovely video short from Yann Pineill and Nicolas Lefaucheux of Paris video production agency Parachutes succinctly demonstrates the underlying mathematics behind everyday occurrences in the format of a triptych. On the left we see the mathematical equation, in the middle a mathematical model, and on the right a video of such things as snowflakes, wind, sound, trees and magnetism. The video begins with the following quote: “Mathematics, rightly viewed, possesses not only truth, but supreme beauty — a beauty cold and austere, without the gorgeous trappings of painting or music.” —Bertrand Russell

The Fibonacci Numbers and Golden section in Nature - 1 This page has been split into TWO PARTS. This, the first, looks at the Fibonacci numbers and why they appear in various "family trees" and patterns of spirals of leaves and seeds. The second page then examines why the golden section is used by nature in some detail, including animations of growing plants. Let's look first at the Rabbit Puzzle that Fibonacci wrote about and then at two adaptations of it to make it more realistic. This introduces you to the Fibonacci Number series and the simple definition of the whole never-ending series. Fibonacci's Rabbits

Combining Fonts A palette with wit Use typefaces with complementary moods to evoke an upbeat, energetic air. It’s the interplay between fonts that gives them energy. The more distant the moods in a typographic palette, the friskier the design will be. Here, three fonts with distinctive silhouettes have been chosen for their contrasting dispositions: the unabashed toughness of Tungsten is a foil for both Archer’s sweetness, and the cheekiness of Gotham Rounded. Math in Pop Culture « 360 Yes, more math in Bones! This one from “The Truth in the Lye”, Season 2 Episode 5. In this episode, a body was found in a bathtub that had been filled with lye, so the body was in an advanced state of decomposition. (My apologies if you’re reading this over a meal.

PI Pi is a name given to the ratio of the circumference of a circle to the diameter. That means, for any circle, you can divide the circumference (the distance around the circle) by the diameter and always get exactly the same number. It doesn't matter how big or small the circle is, Pi remains the same. Pi is often written using the symbol and is pronounced "pie", just like the dessert.