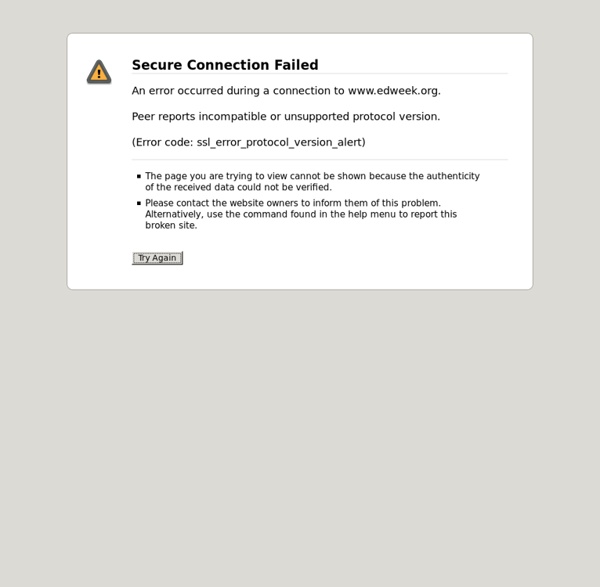 Commentary By Carol Dweck For many years, I secretly worked on my research. I say “secretly” because, once upon a time, researchers simply published their research in professional journals—and there it stayed. However, my colleagues and I learned things we thought people needed to know. We found that students’ mindsets—how they perceive their abilities—played a key role in their motivation and achievement, and we found that if we changed students’ mindsets, we could boost their achievement. So a few years back, I published my book Mindset: The New Psychology of Success to share these discoveries with educators. —Jori Bolton for Education Week This is wonderful, and the good word continues to spread. A growth mindset isn’t just about effort. We also need to remember that effort is a means to an end to the goal of learning and improving. Recently, someone asked what keeps me up at night. In many quarters, a growth mindset had become the right thing to have, the right way to think.

Related:  Universal Design for Learning and Brain Based Learning

Using Playlists to Differentiate Instruction Listen to my interview with Tracy Enos or read the transcript here. Podcast: Play in new window | Download (Duration: 44:52 — 62.0MB) Subscribe: iTunes | Android | In our never-ending quest to find better ways to differentiate and personalize instruction for students, we have plenty of options.

Enjoying the process of Learning Details Created on Monday, 23 January 2012 18:38 Written by Karen Green Karen Green, from Lyons Hall Primary School in Essex, England, shares her experience, tips and classroom activities to teach the growth mindset I’m a primary school teacher at Lyons Hall Primary School, where I teach sixth grade students. We had introduced the growth mindset in school, so students were already familiar with the language of it. Microsoft's Radical Bet On A New Type Of Design Thinking On one otherwise unremarkable day in May 2013, August de los Reyes fell out of bed and hurt his back. Forty-two years old at the time, he was just six months into his dream job at Microsoft: running design for Xbox and righting a franchise that was drifting due to mission creep. At first, de los Reyes was worried that the fall was serious; he went to the ER and was assured that he was fine. Yet several hospital trips later, he found himself undergoing emergency surgery. His spine had been fractured all along.

Recent blog posts - Growth Mindset Blog & Newsletter This article is re-posted with permission from Getting Smart, where it appeared in their Smart Parents series. It was also cross-posted in the Huffington Post Smart Parents Series in partnership with the Nellie Mae Education Foundation. by Eduardo Briceño, CEO Mindset Works Many of us want our children to understand that we love them, and to believe that life can be fulfilling.

Mindset Works®: Student Motivation through a Growth Mindset, by Carol Dweck, Ph.D. Emily translates the latest educational research on mindsets and motivation into growth mindset programs and practices. She delivers professional learning talks and workshops for parents, educators and leaders all over the country, including sessions in partnership with Scholastic. Her latest work includes California Math Council South, New York City Dept of Ed, New Tech Network, and school districts such as Washington DC, Compton Unified, and Delaware’s Vision Network. Has educational neuroscience actually had an impact on education so far? The last reason is that there are certain basic cognitive skills that need to be developed. It is, of course, important to teach content, but an educator also has to be mindful of the ways in which he or she teaches that content. We have to try to strengthen the basic skills that are necessary for learning. This concept – that the brain gets strengthened or reinforced through practice – is very important, and of course many teachers understand this, but it’s more than just practicing learning content. There is some evidence that practicing attention can actually improve attention, for example. SG: In your research, you investigate reasoning skills and why they’re so important.

Why the Growth Mindset is the Only Way to Learn “You’re too old to learn a foreign language.” “I couldn’t work on computers. I’m just not good with them.” “I’m not smart enough to run my own business.” Do you know what these statements have in common? They’re all examples of the fixed mindset- the belief that intelligence, ability, and success are static qualities that can’t be changed.