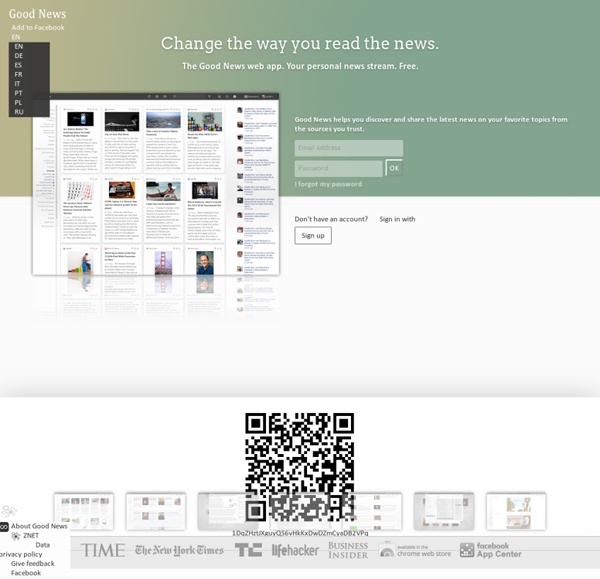 Introducing Media Cloud: A new tool to track how news gets covered Today marks the launch of a big new project from our friends a couple blocks away at the Berkman Center. It’s called Media Cloud, and its aim is to allow researchers and individuals to use data to observe how stories unfold, both in the mainstream media and in the blogs. Media Cloud is a massive data set of news — compiled from newspapers, other established news organizations, and blogs — and a set of tools for analyzing those data. Social curation finds an audience: Pearltrees reaches 10M pageviews With its slick visual interface for bookmarking content, Pearltrees is unique enough that I’ve been both impressed and slightly skeptical that a mass audience will actually use it. But it looks like the site has found plenty of users. The French startup just announced that it crossed two big milestones in March: It has more than 100,000 users curating links, and it received more than 10 million pageviews. Not only does that show the concept is resonating, but it also suggests Pearltrees could reach the scale where it can build a real business around advertising or by offering premium accounts for publishers. When you share links on Pearltrees, they show up as little circles called Pearls. (The site can also automatically add links that you share on Twitter.)

Email Preservation: Turnkey Capture Tool? Earlier today, I interviewed Crawford Neilson, IT system manager for the Social and Public Health Sciences Unit at the Medical Research Council (the UK analogue to the National Institutes of Health). Since 2007, he has been using an open source program, MailArchiva, to mirror a copy of every sent and received message for 120 employees, to an external, searchable index. I’ll be writing up a case study concerning their use of this tool and will be posting that soon. But, in the meantime, I’d just like to share this link, because the software, based on his three years of experience and my examination of the documentation on their website, sounds like an incredibly useful and affordable option for those institutions that need or want to capture a complete email record.

Nowrelevant Adjust Slider To The Amount Of Days You Would Like Your Search Results To Include Top 25 Trending Topics With Growing Interest and Low Search Results Georgia Tech Style Secrets WHAT’S GOING ON IN THIS PICTURE - The Learning Network Blog Photo Students 1. After looking closely at the image above (or at the full-size image), think about these three questions: What is going on in this picture?What do you see that makes you say that? Welcome to the Age of Curation Forrester Research analyst Sarah Rotman Epps coined a phrase Friday for something many have been talking about since Apple launched the iPad about six weeks ago. “Curated computing” refers to the way Apple staff examines each piece of software written for iPhone OS devices before allowing it into (or blocking it from) the App Store. Epps is almost certainly not among the first 10,000 people on the planet to observe that the iPhone OS does not allow users to install whatever programs they wish, unless the devices are jailbroken.

Review aggregator A review aggregator is a system that collects reviews of products and services (such as films, books, video games, software, hardware and cars). This system stores the reviews and uses them for purposes such as supporting a website where users can view the reviews, selling information to third parties about consumer tendencies, and creating databases for companies to learn about their actual and potential customers. The system enables users to easily compare many different reviews of the same work. Many of these systems calculate an approximate average assessment, usually based on assigning a numeric value to each review related to its degree of positive rating of the work. Review aggregation sites have begun to have economic effects of the companies that create or manufacture items under review, especially in certain categories such as electronic games, which are expensive to purchase. §Known review aggregators[edit]

Scoop.it Buffer is the best way to share on Twitter, Facebook, Google+, LinkedIn and App.net from one place. It work from news apps like Flipboard, Zite, Taptu, TweetDeck, Evernote, Pocket, Instapaper, Pulse, Feedly, UberSocial, Plume, Seesmic, Google Currents and other Google Reader app. You also get Twitter analytics, Facebook analytics & LinkedIn stats. When you find something to share, simply add it to your Buffer queue. Buffer will schedule tweets to Twitter, Facebook posts or LinkedIn updates spaced out over the day. You will get the best results by sharing on Facebook and Twitter for Android.