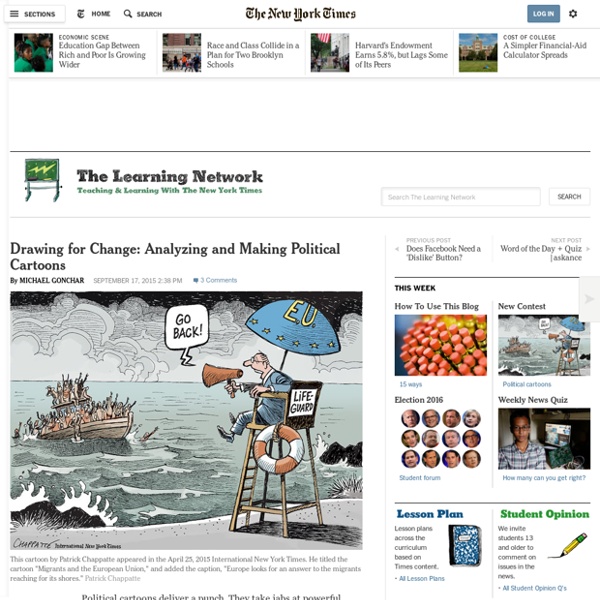 Photo Political cartoons deliver a punch. They take jabs at powerful politicians, reveal official hypocrisies and incompetence and can even help to change the course of history. But political cartoons are not just the stuff of the past. Cartoonists are commenting on the world’s current events all the time, and in the process, making people laugh and think. At their best, they challenge our perceptions and attitudes. Analyzing political cartoons is a core skill in many social studies courses. In this lesson, we provide three resources to assist teachers working with political cartoons: an extended process for analyzing cartoons and developing more sophisticated interpretations;a guide for making cartoons, along with advice on how to make one from Patrick Chappatte, an editorial cartoonist for The International New York Times;a resource library full of links to both current and historic political cartoons. Materials | Computers with Internet access. Analyzing Cartoons Open-Ended Questioning

Banksy's Dismaland 'gave Weston-super-Mare a £20m boost' Image copyright Getty Images When Banksy's anti-capitalist show Dismaland closes its doors on Sunday, the irony that it will have generated an estimated £20m in extra revenue for its surrounding area will not have been lost on traders. Over the past five weeks, more than 150,000 people have visited the subversive theme park in a derelict seafront lido, which had been shut since 2000 and reopened in a blaze of publicity on 20 August. The temporary art show in Weston-super-Mare has sold 4,000 tickets a day online, plus 500 more to people willing to queue for hours, often in pouring rain. Dismaland describes itself as offering "entry-level anarchism", and satirises the tourism and theme-park industries. But, it is the town's tourist businesses that have reaped the benefit - to the tune of £20m, says Visit Somerset, more than three times what the trade body initially suggested.

Asking For and Giving Street Directions English Exercise Introduction: Anybody who has travelled to another country or city has got lost. Sometimes maps don't help, so you have to ask somebody for directions. If you're in a country where they don't speak your language, this can be difficult. At other times, you will have to give directions to people visiting your country.

Frankenstein by Mary Shelley (Free Audio Book) Frankenstein; or, The Modern Prometheus is one of the most famous novels in the world. It was written by the brilliant Mary Wollstonecraft Shelley. The story concerns Victor Frankenstein, a scientist who joins a university in order to study chemistry and philosophy. Victor decides to create a grotesque monster that soon becomes his great foe. The Grammar of TV and Film Zoom. In zooming in the camera does not move; the lens is focussed down from a long-shot to a close-up whilst the picture is still being shown. The subject is magnified, and attention is concentrated on details previously invisible as the shot tightens (contrast tracking). It may be used to surprise the viewer. Zooming out reveals more of the scene (perhaps where a character is, or to whom he or she is speaking) as the shot widens.

How languages evolve - Alex Gendler What is the difference between "a hearty welcome" and "a cordial reception"? In a brief, action-packed history of the English language, Kate Gardoqui explains why these semantically equal phrases evoke such different images. What do Game of Thrones’ Dothraki, Avatar’s Na’vi, Star Trek’s Klingon and LOTR’s Elvish have in common? They are all fantasy constructed languages, or conlangs. Conlangs have all the delicious complexities of real languages: a high volume of words, grammar rules, and room for messiness and evolution.

Video projects In this integrated skills series by Jackie McAvoy, students produce TV and radio programmes. There are comprehensive teaching notes and student worksheets, plus tips for recording and downloading videos. Students record their programmes, either as audio or video, and then upload them to YouTube or Google video. We will show some of the best here on onestopenglish, so send links to your students' videos to webeditor@macmillan.com. 25 BEST WEBSITES FOR LEARNING ENGLISH I want the new e-book! How do you learn English in your free time? Do you meet internationals in cafés, do you self-study using books, do you get on the internet?

Free TOEFL Practice The Test of English as a Foreign Language (TOEFL) measures the ability of non-native speakers of English to use and understand North American English as it is spoken, written and heard in college and university settings. You have 20 minutes to do 20 questions. When you have completed the test you will get a score and you can review your answer to each question.