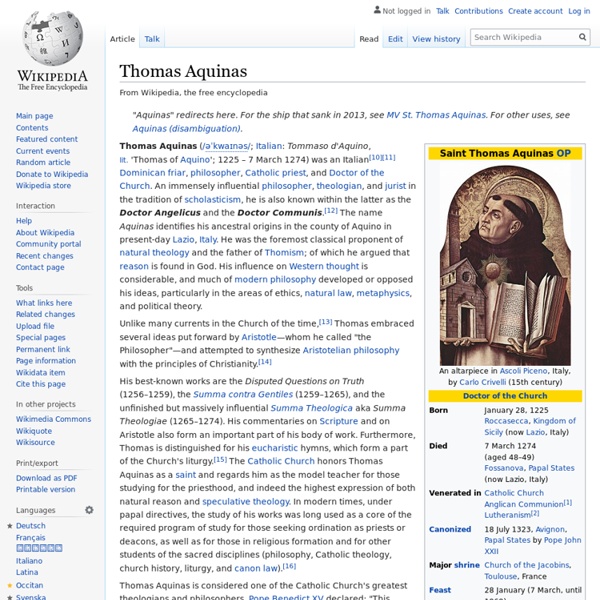 Thomas Aquinas (; Italian: Tommaso d'Aquino, lit. 'Thomas of Aquino'; 1225 – 7 March 1274) was an Italian[10][11] Dominican friar, philosopher, Catholic priest, and Doctor of the Church. An immensely influential philosopher, theologian, and jurist in the tradition of scholasticism, he is also known within the latter as the Doctor Angelicus and the Doctor Communis.[12] The name Aquinas identifies his ancestral origins in the county of Aquino in present-day Lazio, Italy. He was the foremost classical proponent of natural theology and the father of Thomism; of which he argued that reason is found in God. His influence on Western thought is considerable, and much of modern philosophy developed or opposed his ideas, particularly in the areas of ethics, natural law, metaphysics, and political theory. Thomas Aquinas is considered one of the Catholic Church's greatest theologians and philosophers. Biography[edit] Early life (1225–1244)[edit] Naples, Orvieto, Rome (1259–1268)[edit] Philosophy[edit]

Law of noncontradiction One reason to have this law is the principle of explosion, which states that anything follows from a contradiction. The law is employed in a reductio ad absurdum proof. To express the fact that the law is tenseless and to avoid equivocation, sometimes the law is amended to say "contradictory propositions cannot both be true 'at the same time and in the same sense'". Techne "Techne" is a term, etymologically derived from the Greek word τέχνη (Ancient Greek: [tékʰnɛː], Modern Greek: [ˈtexni] ( )), that is often translated as "craftsmanship", "craft", or "art". Description[edit] Techne is a term in philosophy[1] which resembles epistēmē in the implication of knowledge of principles, although techne differs in that its intent is making or doing as opposed to disinterested understanding.

Ernst Mayr German-American evolutionary biologist His theory of peripatric speciation (a more precise form of allopatric speciation which he advanced), based on his work on birds, is still considered a leading mode of speciation, and was the theoretical underpinning for the theory of punctuated equilibrium, proposed by Niles Eldredge and Stephen Jay Gould. Mayr is sometimes credited with inventing modern philosophy of biology, particularly the part related to evolutionary biology, which he distinguished from physics due to its introduction of (natural) history into science. Biography[edit] Mayr was the second son of Helene Pusinelli and Dr.

Bird's-eye view It can be an aerial photograph, but also a drawing. Before manned flight was common, the term "bird's eye" was used to distinguish views drawn from direct observation at high locations (for example a mountain or tower), from those constructed from an imagined (bird's) perspectives. Bird's eye views as a genre have existed since classical times. The last great flourishing of them was in the mid-to-late 19th century, when bird's eye view prints were popular in the United States and Europe. Terminology[edit]

Hans Jonas German philosopher of environmentalism and Gnosticism Hans Jonas (; German: [ˈjoːnas]; 10 May 1903 – 5 February 1993) was a German-born American Jewish philosopher, from 1955 to 1976 the Alvin Johnson Professor of Philosophy at the New School for Social Research in New York City. Biography[edit] Theory Theories guide the enterprise of finding facts rather than of reaching goals, and are neutral concerning alternatives among values.[1]:131 A theory can be a body of knowledge, which may or may not be associated with particular explanatory models. To theorize is to develop this body of knowledge.[2]:46 In modern science, the term "theory" refers to scientific theories, a well-confirmed type of explanation of nature, made in a way consistent with scientific method, and fulfilling the criteria required by modern science. Such theories are described in such a way that scientific tests should be able to provide empirical support for, or empirically contradict ("falsify") it. Ancient uses[edit]

Process philosophy Process philosophy (or ontology of becoming) identifies metaphysical reality with change and development. Since the time of Plato and Aristotle, philosophers have posited true reality as "timeless", based on permanent substances, while processes are denied or subordinated to timeless substances. If Socrates changes, becoming sick, Socrates is still the same (the substance of Socrates being the same), and change (his sickness) only glides over his substance: change is accidental, whereas the substance is essential. Therefore, classic ontology denies any full reality to change, which is conceived as only accidental and not essential. This classical ontology is what made knowledge and a theory of knowledge possible, as it was thought that a science of something in becoming was an impossible feat to achieve.[1] History[edit]

Wars of Alexander the Great The wars of Alexander the Great were fought by King Alexander III of Macedon ("The Great"), first against the Achaemenid Persian Empire under Darius III, and then against local chieftains and warlords as far east as Punjab, India. Due to the sheer scale of these wars, and the fact that Alexander was generally undefeated in battle, he has been regarded as one of the most successful military commanders of all time. By the time of his death, he had conquered most of the world known to the ancient Greeks.[1] Although being successful as a military commander, he failed to provide any stable alternative to the Achaemenid Empire[2]—his untimely death threw the vast territories he conquered into civil war. Alexander had already made more plans prior to his death for military and mercantile expansions into the Arabian Peninsula, after which he was to turn his armies to the west (Carthage, Rome, and the Iberian Peninsula).