Why Americans Are the Weirdest People in the World 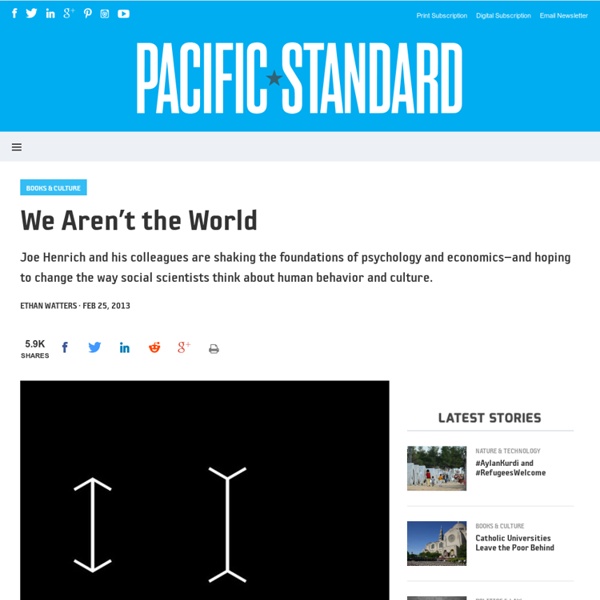 In the Summer of 1995, a young graduate student in anthropology at UCLA named Joe Henrich traveled to Peru to carry out some fieldwork among the Machiguenga, an indigenous people who live north of Machu Picchu in the Amazon basin. The Machiguenga had traditionally been horticulturalists who lived in single-family, thatch-roofed houses in small hamlets composed of clusters of extended families. For sustenance, they relied on local game and produce from small-scale farming. They shared with their kin but rarely traded with outside groups. While the setting was fairly typical for an anthropologist, Henrich’s research was not. The test that Henrich introduced to the Machiguenga was called the ultimatum game. Among the Machiguenga, word quickly spread of the young, square-jawed visitor from America giving away money. When he began to run the game it became immediately clear that Machiguengan behavior was dramatically different from that of the average North American. “Yes,” Henrich said. Related:  Psychology • Ontology • cog sci

The Unaddressed Business of Filling Our Souls: Mood Science and the Evolutionary Origins of Depression by Maria Popova What language and symbolism have to do with mood and how light exposure and sleep shape our mental health. “Depression is a disorder of the ‘I,’ failing in your own eyes relative to your goals,” legendary psychologist Martin Seligman observed in his essential treatise on learned optimism. But such a definition of depression, while true, appears somehow insufficient, overlooking the multitude of excruciating physical and psychological realities of the disease beyond the sense of personal failure. Perhaps William Styron came closer in his haunting memoir of depression, Darkness Visible, where he wrote of “depression’s dark wood,” “its inexplicable agony,” and the grueling struggle of those afflicted by it who spend their lives trying to trudge “upward and outward out of hell’s black depths.” Because depression is so unpleasant and so impairing, it may be difficult to imagine that there might be another way of thinking about it; something this bad must be a disease.

Varieties of Scientific Experience: Carl Sagan, Who Died on This Day in 1996, on Science and God by Maria Popova “If we ever reach the point where we think we thoroughly understand who we are and where we came from, we will have failed.” I was recently on NPR’s Science Friday to discuss my favorite science books of the year and a listener called in, asking for a recommendation for a good book on science and religion — an excellent question, given the long history of this polarization, which occupied great minds from Galileo to Einstein to Ada Lovelace to Isaac Asimov, and many more. The best book on the subject, by far, is The Varieties of Scientific Experience: A Personal View of the Search for God (public library) — a remarkable posthumous collection of essays by Carl Sagan, based on the prestigious Gifford Lectures on Natural Theology he delivered at the university of Glasgow in 1985, following in the footsteps of such celebrated philosophers as James Frazer, Arthur Eddington, Werner Heisenberg, Niels Bohr, Alfred North Whitehead, Albert Schweitzer, and Hannah Arendt.

The science of willpower: Kelly McGonigal on sticking to resolutions It’s the second week in January and, at about this time, that resolution that seemed so reasonable a week ago — go to the gym every other day, read a book a week, only drink alcohol on weekends — is starting to seem very … hard. As you are teetering on the edge of abandoning it all together, Kelly McGonigal is here to help. This Stanford University psychologist — who shared last year how you can make stress your friend — wants you to know that you’re not having a hard time sticking to a resolution because you are a terrible person. McGonigal has, for years, taught a course called “The Science of Willpower” through Stanford’s Continuing Studies program and, in 2011, she spun it into a book, The Willpower Instinct. First question: why is willpower such a struggle? It’s a great question. The reason that so many things can trigger that kind of conflict is because that’s the essence of human nature. I think it depends on how you go about making your New Year’s resolution. Yes! Yes.

Givers, Takers, and Matchers: The Surprising Social Science of Success by Maria Popova Counterintuitive insight on what makes people thrive from the wunderkind of organizational psychology. “The principle of give and take; that is diplomacy— give one and take ten,” Mark Twain famously smirked. But for every such cynicism, there’s a heartening meditation on the art of asking and the beautiful osmosis of altruism. “The world is just,” Amelia Barr admonished in her rules for success, “it may, it does, patronize quacks; but it never puts them on a level with true men.” After all, it pays to be nice because, as Austin Kleon put it, “the world is a small town,” right? Well, maybe — maybe not. Grant’s extensive research has shed light on a crucial element of success, debunking some enduring tenets of cultural mythology: According to conventional wisdom, highly successful people have three things in common: motivation, ability, and opportunity. At the heart of his insight is a dichotomy of behavioral styles people adopt in pursuing success: Donating = Loving

The Politics of Ontology Much energy has been devoted over the last decade to the so-called ontological turn in the social sciences, and in anthropology in particular. A number of statements, critiques, and discussions of this position are now available (e.g., Viveiros de Castro 2002; Henare et al. 2007; Jensen and Rödje 2010; Pedersen 2011; Holbraad 2012; Ishii 2012; Candea and Alcayna-Stevens 2012; Blaser 2013; Paleček and Risjord 2013; Scott 2013), and its implications for anthropological research are being concertedly explored and passionately debated (e.g., Venkatesan et al. 2009; Alberti et al. 2011; Viveiros de Castro 2011; Laidlaw 2012; Ramos 2012; Pedersen 2012; Strathern 2012). The following set of position papers represent contributions to a well-attended roundtable discussion held at the 2013 annual meeting of the American Anthropological in Chicago. The participants were invited to address such questions as, Why have social scientists turned to the concept of ontology in the ways that they have?

When “Life Hacking” Is Really White Privilege — Get Bullish It happens all the time that white people claim not to be racist because they didn’t intend to be racist; they weren’t thinking about that at all. But there are many situations in which it is precisely your job to think about that. Nothing induces more rage in others than your taking what you do not deserve and not even noticing. A small example: Sometimes I am waiting in line, killing time on my phone, when the cashier, ticket-taker, or receptionist summons me forward. (I am fairly certain that I read as a Fancy White Lady. Now that I have a wedding ring, I may have reached the very peak of privilege in my lifetime.) In situations in which it’s not clear which way the line is supposed to form, or in which multiple lines ultimately lead to the same service point, it has absolutely happened that I was being invited to jump ahead of someone. Plenty of positive thinking literature would encourage me to see this as manifesting abundance or drawing positive energy my way.

the-thought-father-nobel-prizewinning-psychologist-daniel-kahneman-on-luck-9199162 The 80-year-old Israeli-American is recognised as one of the most influential thinkers alive today. His theories of dual-speed processing and heuristics are to cognitive psychology what Darwin’s theory of evolution was to biology. His talent for describing his findings in clear, illuminating language has earned him a popular following most rock bands would envy. And yet the way he tells it, this impish octagenerian sitting opposite me in the Royal Institution library, almost all of his findings were sheer chance. He was fortunate to survive an early boyhood as part of a Jewish family in occupied France, lucky too that his mother was a “talented gossip” who inspired his fascination for how very strange people are (including the SS officers patrolling their town). He claims he wouldn’t have made any of his advances if it wasn’t for a chance meeting with his late friend and collaborator, Amos Tversky, on a “lucky day” in Jerusalem, 1969. Do keep natural impulse in check. Do be fair.

The 13 Best Books of 2013: The Definitive Annual Reading List of Overall Favorites by Maria Popova Soul-stirring, brain-expanding reads on intuition, love, grief, attention, education, and the meaning of life. All gratifying things must come to an end: The season’s subjective selection of best-of reading lists — which covered writing and creativity, photography, psychology and philosophy, art and design, history and biography, science and technology, children’s literature, and pets and animals — comes full-circle with this final omnibus of the year’s most indiscriminately wonderful reads, a set of overall favorites that spill across multiple disciplines, cross-pollinate subjects, and defy categorization in the most stimulating of ways. (Revisit last year’s selection here.) “How we spend our days,” Annie Dillard wrote in her timelessly beautiful meditation on presence over productivity, “is, of course, how we spend our lives.” Horowitz begins by pointing our attention to the incompleteness of our experience of what we conveniently call “reality”:

Indigenous Knowledge Systems / Alaska Native Ways of Knowing By Ray Barnhardt and Angayuqaq Oscar Kawagley / schoolingtheworld.org A few years ago, a group of Alaska Native elders and educators was assembled to identify ways to more effectively utilize the traditional knowledge systems and ways of knowing that are embedded in the Native communities to enrich the school curriculum and enliven the learning experiences of the students. After listening for two days to lengthy discussions of topics such as indigenous world views, Native ways of knowing, cultural and intellectual property rights and traditional ecological knowledge, an Inupiaq elder stood up and explained through an interpreter that he was going to describe how he and his brother were taught to hunt caribou by their father, before guns were commonplace in the upper Kobuk River area of northern Alaska. The elder described how his father had been a highly respected hunter who always brought food home when he went out on hunting trips and shared it with others in the village.