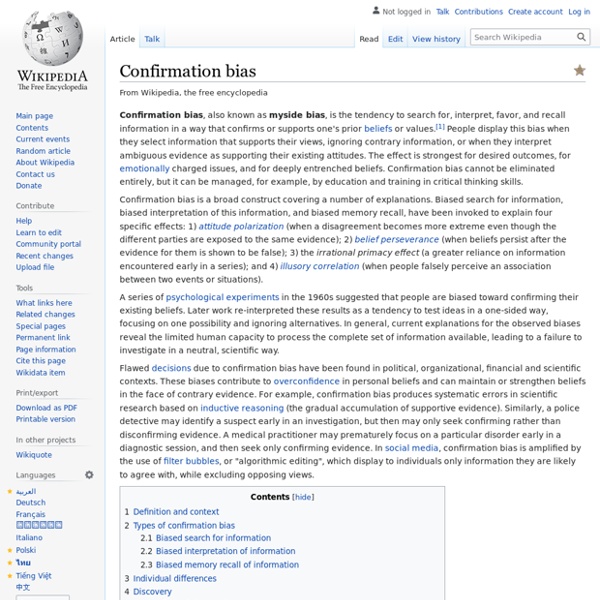 Confirmation bias, also called confirmatory bias or myside bias,[Note 1] is the tendency to search for, interpret, favor, and recall information in a way that confirms one's preexisting beliefs or hypotheses, while giving disproportionately less consideration to alternative possibilities.[1] It is a type of cognitive bias and a systematic error of inductive reasoning. People display this bias when they gather or remember information selectively, or when they interpret it in a biased way. The effect is stronger for emotionally charged issues and for deeply entrenched beliefs. People also tend to interpret ambiguous evidence as supporting their existing position. A series of experiments in the 1960s suggested that people are biased toward confirming their existing beliefs. Later work re-interpreted these results as a tendency to test ideas in a one-sided way, focusing on one possibility and ignoring alternatives. Types[edit] Confirmation biases are effects in information processing.

Framing (social sciences) In the social sciences, framing is a set of concepts and theoretical perspectives on how individuals, groups, and societies organize, perceive, and communicate about reality. Framing is the social construction of a social phenomenon often by mass media sources, political or social movements, political leaders, or other actors and organizations. It is an inevitable process of selective influence over the individual's perception of the meanings attributed to words or phrases. It is generally considered in one of two ways: as frames in thought, consisting of the mental representations, interpretations, and simplifications of reality, and frames in communication, consisting of the communication of frames between different actors.[1] The effects of framing can be seen in many journalism applications.

Curse of knowledge The curse of knowledge is a cognitive bias that leads better-informed parties to find it extremely difficult to think about problems from the perspective of lesser-informed parties. The effect was first described in print by the economists Colin Camerer, George Loewenstein and Martin Weber, though they give original credit for suggesting the term to Robin Hogarth.[1] History[edit] While the economists Colin Camerer, George Loewenstein, and Martin Weber were the first to "coin" the term "curse of knowledge" and to describe, and effectively, define this phenomenon, they are self-reportedly not the first individuals to document or study the effect; on the other hand, in their publication they state that: "All the previous evidence of the curse of knowledge has been gathered in psychological studies of individual judgments", referring readers to Baruch Fischhoff's work from 1975, which also involves the hindsight bias.[2] Applications[edit] See also[edit]

Simon Newcomb - Wikipedia Simon Newcomb (March 12, 1835 – July 11, 1909) was a Canadian-American astronomer, applied mathematician and autodidactic polymath, who was Professor of Mathematics in the U.S. Navy and at Johns Hopkins.[1] Though he had little conventional schooling, he made important contributions to timekeeping as well as other fields in applied mathematics such as economics and statistics in addition to writing a science fiction novel. Special pleading This article is about the informal fallacy. For the legal concept, see Special pleader. Special pleading is a form of fallacious argument that involves an attempt to cite something as an exception to a generally accepted rule, principle, etc. without justifying the exception.[1][2]

Attentional bias Attentional bias is an ad hoc scientific term. Attentional bias can also refer to the tendency of our perception to be affected by our recurring thoughts. [1] For example, if we think frequently about the clothes we wear, we pay more attention to the clothes of others. Decisions[edit] Choice-supportive bias In cognitive science, choice-supportive bias is the tendency to retroactively ascribe positive attributes to an option one has selected. It is a cognitive bias. For example, if a person buys a computer from Apple instead of a computer (PC) running Windows, he is likely to ignore or downplay the faults of Apple computers while amplifying those of Windows computers. Conversely, he is also likely to notice and amplify advantages of Apple computers and not notice or de-emphasize those of Windows computers. General definition[edit] The tendency to remember one’s choices as better than they actually were, where people tend to over attribute positive features to options they chose and negative features to options not chosen.[1]

Selection bias - Wikipedia Selection bias is the selection of individuals, groups or data for analysis in such a way that proper randomization is not achieved, thereby ensuring that the sample obtained is not representative of the population intended to be analyzed.[1] It is sometimes referred to as the selection effect. The phrase "selection bias" most often refers to the distortion of a statistical analysis, resulting from the method of collecting samples. If the selection bias is not taken into account, then some conclusions of the study may not be accurate.