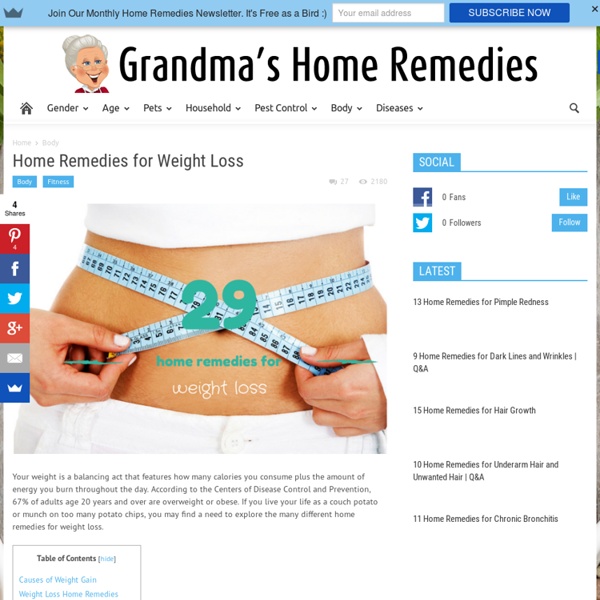 Your weight is a balancing act that features how many calories you consume plus the amount of energy you burn throughout the day. According to the Centers of Disease Control and Prevention, 67% of adults age 20 years and over are overweight or obese. If you live your life as a couch potato or munch on too many potato chips, you may find a need to explore the many different home remedies for weight loss. Causes of Weight Gain From drinking too much soda to going through a divorce, there are numerous everyday habits and events in life that can contribute to an increase in weight. • Medications: While prescription drugs are supposed to make you feel better, some also come with side effects that can cause you to gain weight. • Lifestyle: Your daily habits could be at the root of your weight gain. • Life Changes: When the body goes through a change, such as hormonal changes associated with menopause and pregnancy in women, weight can become redistributed and accumulate in the body. b) 7 p.m.

How to Level Up in the Game of Life Ding! This may be the sweetest sound you can possibly hear when playing a role-playing game (henceforth referred to as an RPG). “DING!” or something similar depending on the video game you’re playing, means that your character completed a certain number of quests, killed a specific number of monsters, and ran enough errands to level up. Congratulations, or “grats!” It’s this particular reason that games like World of Warcraft, Rift, Oblivion, Everquest 2, and any other RPG are so damn addictive: there’s always another level to reach, another dragon to kill, and better armor to acquire. Today, we’re going to turn life into a giant role playing game. Since day one, the tagline for Nerd Fitness has been “Level up your life.” Today, you’re going to learn how. Don’t complain about your starting zone Let’s assume that you hit the random button when creating your character in World of Warcraft - you were hoping for a good looking elf and ended up with a goofy-looking ogre. That’s life. Nope. -Steve

10-Minute Yoga 'Supersets': Better than Another Hour of Yoga -... This year, after 15 years of yoga practice and transforming my body, I found myself hitting a plateau. Though my practice regularly involves power moves like jumping forward into Crow Pose and holding Warrior Pose for a long time, my muscle tone seemed to be stuck on autopilot: never decreasing, but never really going to that next level, either. My body, it seems, has become accustomed to the level of my practice. To move past the plateau, I could have just started practicing more. I know what some of you are thinking: “This chick owns a yoga studio and practices a ton … I don’t have that much time.” The magic word here is “supersets” Bodybuilders and exercise physiologists have known about the benefits of the superset technique for years, and it’s time we brought it onto the mat. In yoga we often do one repetition of any given pose — say, Chaturanga (Pushup Pose) — then move on. So instead of staying at the yoga studio for another hour, add a 10-minute superset three times a week.

10 Power Food Combos The Oscar winning visionary filmmaker opened up during a Reddit AMA on Saturday afternoon. James Cameron, the acclaimed filmmaker behind sci-fi classics like Terminator, Aliens, and Terminator 2, as well as the blockbuster behemoths Titanic and Avatar, participated in a surprisingly candid Reddit AMA on Saturday afternoon. The self-proclaimed “king of the world” was online promoting Years of Living Dangerously, a 9-part documentary series about the filmmaking styles of top directors, which will premiere on Sunday, April 13 on Showtime. And Redditors, as is their wont, didn’t let Cameron off easy, prodding him with questions ranging from how to find missing Malaysia Airlines flight MH370—Cameron knows how, apparently! Here’s the cream of the crop. [Note: No changes were made to Mr. On how best to combat climate change: The single biggest thing that an individual can do to combat climate change is to stop eating animals. On how to find Flight MH370: Well, I know how it will be done.

Banish belly fat | Fitness Banish belly fat Melt your muffin top and fight belly fat with our 15-minute flat-abs workout By Diane Hart Is your belly more rippled than ripped? More of a two-four than a six pack? If so, tackle that belly fat every other day with this 15-minute exercise plan, which targets the muscles that support the spine as well as the abs. Flat abs diamond leg crunch Lie on your back, with your hands behind your head for support. TIP: Keep your elbows back as you crunch; you shouldn’t see them move forward. Flat abs arm/leg lift Lie on your back with your knees bent, feet flat on the floor and arms extended over your head on the floor. Flat abs ball pass Lie on your back holding a stability ball or pillow over your head, knees bent and feet flat on the floor. TIP: Keep movement slow and controlled, while keeping your spine close to the floor. Flat abs scissors 1. Flat abs bicycle Lie on your back, legs extended on the floor, with your hands behind your head for support. Flat abs reverse curl Bonus!

Customize Every Aspect of Your Android Experience One of the biggest advantages of Android’s open source roots is that users have complete control over pretty much every aspect of the operating system. If you don’t like any aspect of the stock Android experience, there’s a good chance that someone somewhere has already done something about it. If you own an Android phone that is not a Nexus (One or S), you have probably already experienced this. This is often misunderstood by the less tech-savvy, who assume that what you see is what you get. For more articles on customizing Android, check out our roundups of Awesome Live Wallpapers, Outstanding Android Themes, and Beautiful Wallpapers. Introduction You don’t use the default widgets and application icons on the home screen? From the launcher and basic phone functions to all the stock applications that come with the phone, everything can be replaced with applications from the Android Market, often with better features and functionality. Dialer: Dialer One (free) Dialer One Dialer2 (free)

You Know You Want Sexy Abs! | healthkicker The next month or two of work on Xanga 2.0 is going to be busy, so I wanted to share with everyone a roadmap of how we’re thinking about things! We’re dividing the work on this project into four basic phases. Phase 1. Data migration As described here, we’ve imported over every account that we have on Xanga over to the new system so that anyone who could sign into Xanga can still sign into Xanga 2.0. Finally and most important of all, we’ve imported over 2 million blogs from the old system. * We’ve archived the blogs of the hundreds of thousands of blogs where the user has logged in in the past 5 years and has at least two subscribers. * We did an additional set of archives for 200k users who had logged in the past year and had at least 10 blogs. * We’ve also archived the blogs of every single user that’s ever been premium at any point in the past… And of course, a lot of you guys archived your own blogs using the old Xanga archive generator. Phase 2. Phase 3. Phase 4.