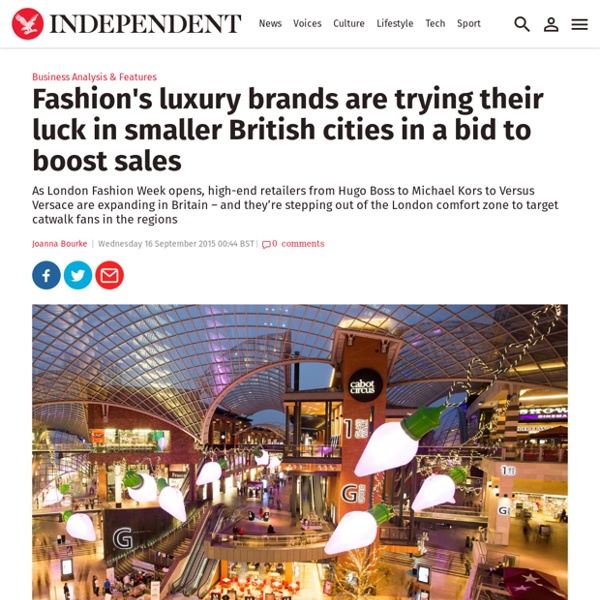 1/50 United goin down Manchester United's absence from the Champions League hurt more than the fans' pride last year - it also dented the bottom line. Revenues at the New Uork listed club dipped 8.8 per cent to £395.2m in the year to June, triggering a £1.2 million loss after broadcasting and sponsorship deals dried up. The club said it was now looking to raise $400m from a share issue. GETTY IMAGES 2/50 Star Wars boosts economy Production of the next Star Wars movie has brought an economic impact of some £150 million to Britain, according to company accounts. The seventh movie in the series, The Force Awakens, will be released in December. 3/50 Natalie Massenet Leaves Net-a-Porter The Net-a-Porter founder Natalie Massenet decided to quit the online fashion retailer during "a summer of reflection" that included a spectacular 50th birthday party on the Almalfi coast.

MADE IN BRITAIN - Topshop Blog Featured Tis the season to be British – tralalalala… lalalala… With the Jubilee and the Olympics encouraging our patriotic tendencies, we thought it was high time classic, quintessential style hit the fashion headlines and thus, our new collection Made in Britain was born. Marrying tradition with innovation (because isn’t that so the British way?), every piece has been lovingly crafted in the heart of London’s East End to create a capsule collection that even the Queen herself would be proud of. From slick, utilitarian outerwear in the finest wool, tweeds and cashmere to sumptuous silk separates in graphic and floral prints: think pure, unadulterated luxury that exudes true British heritage.

Apple embraces its future as a very expensive luxury brand Apple products were always high end, but now they're shooting for being downright rich. This week, Apple made itself more appealing to people with money to burn. It debuted a new Apple Watch collection from designer brand Hermes, an Apple TV app from high-end fashion site Gilt — where some outfits cost more than $1,000 each — and rose gold iPhones. The mass-appeal, cheaper iPhone 5C was quietly shelved. Versace Sees Significant Growth in 2015 MILAN, Italy – Gianni Versace SpA, the luxury-goods maker partly owned by Blackstone Group LP, forecast a repeat of last year’s double-digit sales growth in 2015 and said it will review pricing after Chanel announced plans to revise its policy. “At this moment in time, the top line looks very encouraging,” Chief Executive Officer Gian Giacomo Ferraris said Thursday by phone. “Sales are going really well” and the company expects to benefit from the weak euro, he said. Versace, which sold a 20 percent stake to Blackstone last year for 210 million euros ($229 million), joins Salvatore Ferragamo SpA in reporting a strong start to 2015 even as anti- graft measures weigh on spending in China.

Can big brands catch up on sustainable fashion? Imagine a pair of trousers you could throw on the compost. After years of use, they could decompose among the eggshells and tea bags to leave behind nothing but some fertile soil to help grow new raw materials. It takes the circular economy to a whole new level. This is the idea behind F-ABRIC, a range of materials developed by Swiss company Freitag. Until recently, Freitag’s only line of business was making bags out of old truck tarpaulins.

Alta Moda’s Luxurious Fashion Show - The New Yorker Four days will quickly steep themselves in night;Four nights will quickly dream away the time. Stefano Gabbana, the fashion designer, leaned on the railing of his yacht, the Regina d’Italia, and smiled. His neighbors in the Portofino marina were enjoying an early-evening aperitivo on the deck of the Ester III—an enormous vessel, with a helipad on top and a transparent-frame swimming pool on the lower deck, that had drawn admiring stares from pedestrians on the quay all afternoon.

Brand History – Versace Official Website This year’s 2009 annual black-tie Whitney Museum’s benefit held at the Whitney Museum in New York Monday October 19th, 2009 was sponsored by Versace and hosted by Museum Chairman Adam Weinberg, Donatella Versace, and Liz Swig. Honoring Leonard A. Lauder, the evening began with cocktails in Robert J. Economy Of Fashion: How Different Trends Reflect The Financial State It’s common knowledge fashion is cyclical in nature. The concept of “newness” in fashion doesn’t refer to the premiere of a trend, but rather its revival. Why fashion cycles in this manner, however, is less obvious. There are lots of factors at play: cultural trends, politics, celebrity influence. One one of the most surprising factors to influence the cycle of fashion, though, is the state of the global economy. If you think about it, it makes sense.

Mulberry director Roger Mather sells shares on way to exit The outgoing finance director at Mulberry, Roger Mather, has sold a chunk of shares in the luxury handbag maker, calling into question his faith in its tentative recovery. Mr Mather, who announced his decision to step down from the post earlier this month, sold off 33,000 shares for a total of £296,558 in two transactions earlier this week. He still holds around 100,000 shares and options under the company’s long-term incentive plan. Known for its leather handbags, including the £1,100 Alexa, Mulberry has been trying to restore its reputation for affordable luxury after an ill-fated push upmarket triggered multiple profit warnings. Mr Mather’s departure is the latest in a string of top-level management changes at the label amid attempts to revive the brand.

Fanatical About Fashion Blog The first Versace boutique was open in 1928, Milan, Italy. The popularity of the fashion label was almost immediate. The fashion label at present has turned into an empire of diversification in terms of business selling items such as home interior, beauty products, aftershave, perfume, Versace couture jeans, men’s apparel, woman’s apparel, couture evening wear, high fashion clothing and they even have the Versace Palazzo hotel on the gold coast of Australia and also there is construction of a hotel in Dubai. Basically since the day Versace launched it has grown ever since and became a conglomerate of businesses.

Investigating The Sustainability Claims Behind H&M ColumnIs fast fashion giant H&M really making moves to become more sustainable, or is it all just greenwashing? Editor’s Note: This is Jessica Marati’s first column for Behind The Label, which will explore whether brands claiming sustainable initiatives are going green – or just plain greenwashing. It’s so easy to love and hate H&M. On the one hand, the Swedish fashion chain has played a significant role in democratizing fashion and bringing trends once reserved for the upper classes to the masses. On the other, H&M’s fast fashion model has accelerated the fashion cycle to its current frenetic pace, driving down prices and increasing pressure within the industry to produce more, quicker, with little regard to the people and environments involved.

Fashion makes an exhibition of itself to pull in the public At this month’s London fashion week, the brightest and the best of British designers have made room for visitors from all over the world. Mega-brands continue to flock to the capital for its cool factor. Versus, the younger line of Versace, brought a typical splash of glamour showing the spring/summer 2016 collection. Louis Vuitton, the storied Parisian fashion house, has made a more permanent move.

The House of Versace is known for its iconic styling, superior quality, and exquisite design. Versace takes craftsmanship and creativity to new heights, continually redefining style for celebrities and consumers alike. As one of the world’s leading fashion brands, we look to Versace for new trends, yet one of its most iconic elements, the Greek key design, dates back to ancient Greece. Classic Antiquity Meets Contemporary Fashion The Greek key is made of an interlocking rectangular pattern constructed from one continuous line. Interview with Olivia Burton founders, Lesa Bennett and Jemma Fennings Succeeding in creating a women’s watch collection that is distinctive, creative and fun – we wanted to know a little more about the women behind the Olivia Burton watch brand, that brings us such delectable and affordable British styled wristwear. How did you decide that making wristwatches was what you wanted to do? We’re both very passionate about watches and have talked about starting our own business for a while. Jointly we had both been working in fashion buying and production for 15 years and felt that we were ready to take the plunge. You met each other on your first day at London College of Fashion, would you say your friendship is paramount to the success of Olivia Burton?

Behind the curve, the closed world of haute couture calls in the geeks Designers will unveil their collections for spring 2016 on the catwalks of New York this week, followed by London, Milan and then Paris, where the twice-yearly fashion circus concludes in a month’s time. The intense schedule of presentations, many costing well into seven figures, has been established for decades. It has traditionally been a closed shop; an exclusive, invitation-only cabaret for the style cognoscenti. But things are changing, and some industry insiders are now predicting the demise of this exhausting and indulgent showcase of designer theatrics as its relevance in an era of fashion democracy, instant gratification and tech innovation is questioned.