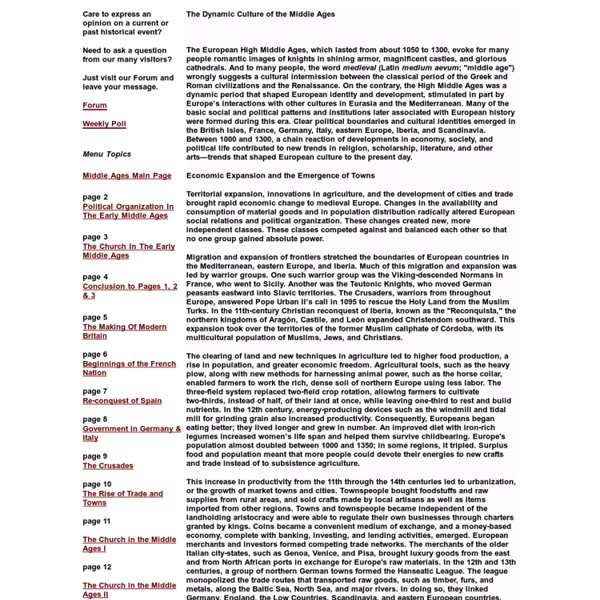 The European High Middle Ages, which lasted from about 1050 to 1300, evoke for many people romantic images of knights in shining armor, magnificent castles, and glorious cathedrals. And to many people, the word medieval (Latin medium aevum; "middle age") wrongly suggests a cultural intermission between the classical period of the Greek and Roman civilizations and the Renaissance. On the contrary, the High Middle Ages was a dynamic period that shaped European identity and development, stimulated in part by Europe’s interactions with other cultures in Eurasia and the Mediterranean. Many of the basic social and political patterns and institutions later associated with European history were formed during this era. Clear political boundaries and cultural identities emerged in the British Isles, France, Germany, Italy, eastern Europe, Iberia, and Scandinavia. Economic Expansion and the Emergence of Towns Social Diversity Political Centralization and the Development of Government by Consent

Medieval Period - Castles, Weapons, Torture Devices, and History Ethnic and Religious Groups in Medieval Poland - Medieval Studies The best general overview of the composition of the Polish society and its transformations in the Middle Ages is offered by Ihnatowicz, et al. 1988. The studies of Kłoczowski 1998 and Kłoczowski 2000 present the history of Polish Christianity and analyze the relations between the Catholic and the Orthodox churches, as well as their attitude toward non-Christian groups. A comprehensive analysis of various ethnic and religious minorities in medieval Poland is presented in Drabina 1989, supplemented by selected sources in Polish translation from Drabina 1994. Two recent studies, Samsonowicz 1993 and Janeczek 2003, offer general reflections on the functioning of ethnic minorities in late medieval Poland. Drabina, Jan, ed.

Defining the Middle Ages - Introduction One of the most frequently asked questions about medieval history is, "When did the Middle Ages start and end?" The answer to this simple question is more complicated than you might think. There is currently no true consensus among historians, authors, and educators for the precise dates -- or even the general dates -- that mark the beginning and end of the medieval era. The most common time frame is approximately 500-1500 C.E., but you will often see different dates of significance marking the era's parameters. The reasons for this imprecision become a little more clear when one considers that the Middle Ages as a period of study has evolved over centuries of scholarship. Once a "Dark Age," then a romantic era and an "Age of Faith," medieval times were approached by historians in the 20th century as a complex, multifaceted era, and many scholars found new and intriguing topics to pursue. Next page: Part 2: Stuck in the Middle Defining the Middle Ages

Famous Medieval People Famous People - Medieval Biographies, Timelines and History of the Famous People Famous people of the Medieval period and details of the key dates and events in their lives. Famous people include Medieval lords, nobles, warriors, religious leaders, inventors of both Europe and England during the Medieval times. For facts and interesting information, timelines and biographies of famous people click the links to the following: Medieval Women Medieval Kings The other famous people of the era were the heroes and villains of the era who included Artists, Clerics, Crusaders, Diplomats, Religious Leaders, Military Leaders, Philosophers & Theologians, Physicians, Mathematicians, Writers & Poets and Reformers who featured in the turbulent times of the Middle Ages from 1066 - 1485. Famous People - Medieval Biographies and Timelines of the Heroes and Villains The Biographies and Timelines of famous Medival people detail the key dates and events in their lives. Robin Hood

Medieval History, Castles MedievalPlus.com The Middle Ages is a period in European history which, along with its adjective ‘Medieval’, was first referred to by italian scholars and academics of the late fifteenth century. They were basically stating that the society in which they now lived was significantly more civilized and advanced in many ways, than that which had existed during the previous thousand years. This may have been true within certain elite sections of Italian society which had begun to emulate the art and philosophy of ancient Greece, but generally in Italy and Europe overall no all-pervading change had occurred. Historians since that time have, however, used the terms 'middle ages' and medieval as a convenient way to refer to that general period in European history. It has been regarded as extending approximately from the end of the fifth century AD, when the control of the Roman Empire had ended, until the end of the fifteenth century AD, when the modern world was considered to have begun.