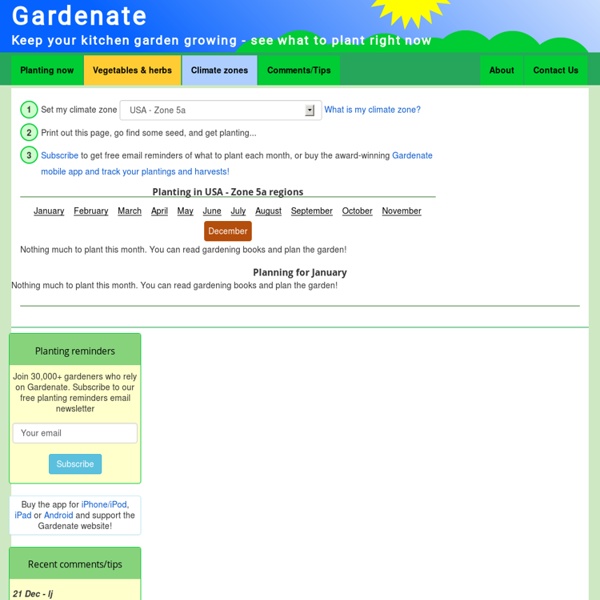 The Ultimate When to Plant Guide Pay attention. This may be the most valuable tidbit of gardening wisdom anyone ever hands you. Of course it also might not be. When to plant – every seed packet you pick up has a little map on the back with 4 or 5 colored zones and planting dates for each zone. As a general rule seeds that can germinate at a lower temperature are also more resistant to rot. If you study this table you will begin to understand why those melons never came up – too cool/wet and they rot, too warm – they just never germinate. If you are starting seeds indoors you can see why it’s so hard to get tomatoes to come up in that sunny (but cold at night) window – those little plugs of soil do cool off quickly unlike the soil in your garden. On the other end of the chart – when it is too hot for the seeds to germinate, most plants start to stress or die from heat, especially if they aren’t kept watered. BTW, one of those digital kitchen thermometers works great for checking soil temp.

Vegetables to grow in winter With the help of a bit of cover, and carefully selected varieties of seeds, it is possible to grow vegetables and herbs all year round in the United Kingdom, and presumably therefore in other temperate countries that have frosty winters.In my corner of Scotland, away from the sea and up in the hills, there is only one month of the year that can be guaranteed to be frost free and that is July. Most years we cannot grow courgettes or runner beans outside without cover. In our case, experimenting has paid off and we often have more produce in winter than in summer. Last year by the end of winter we were fed up with salad! Why grow vegetables in winter? There are a number of advantages to growing vegetables in winter: Mature overwintered veg keeps growing until December under cover, stands for the winter then comes away fast in February. Protecting plants from frost We had great success last year with an old caravan window found in a lay-by which we put on top of some lamb's lettuce.

Gardening Australia Deschampsia Hair grasses are undemanding plants that will grow in any good garden soil, but their preference is for moist humus-rich soil. They will do best if planted in a position in sun or light shade. Transplanting Tips Angus shares a number of great tips to help give transplanted plants every chance of survival Food for the Soil Jerry is talking dung, looking at a range of weird and wonderful manures to keep his soil fed and thriving How To Grow A Four-Season Garden - Part 1 | One Green Generation Don’t Believe Everything You’re Told When I moved to Geyserville, California in May of last year, I was excited to grow my own food for the first time. But immediately my neighbors dashed my hopes. They told me that it was too late to grow much this year – that I’d have to wait until next year. Sure enough, I found a pamphlet put out by the local Master Gardeners, confirming that it was too late to plant most crops. Fortunately, I didn’t listen. Matt and I first amended the soil. What didn’t work? In September, our neighbors told us we would lose our garden to the rains any moment. We harvested 240 lbs. of tomatoes from 4 plants. We didn’t listen. All because we really wanted to do it and nothing was going to stop us. Ten Reasons To Grow A Four-Season Organic Garden Growing your own food reduces the distance your food travels from the farm to you (10 feet, say, versus 250-2,500 miles). When To Plant Fall and Winter Gardens Plant in early to mid-summer for a fall garden. Read On!

How to: create a Planting Calendar I must say that while I’m finding this market garden experiment very exciting, it’s also rather daunting. What are we planting today? What are we planting next week? Where are we going? Joyce Wilkie devised this garden card system firstly for her market garden at Allsun Farm, but happily she’s the kind of lady that likes to share. The Allsun Farm planting calendar system works in a simple but powerful way: Each month has a designated card. It’s disarmingly simple, and powerful too. Each month has three columns: Grow Seedlings (ie plant them into pots), Sow into Ground, and Pick. If you don’t know how to plant the crop in question, that bit of research should be done first. 12 months of planting and picking at Allsun Farm, all in your pocket September is busy! The cards are also great because you can jot down important notes on them (numbers of plants, unexpected frost date, etc) and cross things off as they get done. So what are you waiting for? >> Allsun Planting Calendar pdf

Heavy Petal: Gardening: from a West Coast, urban, organic perspective. Lacinato kale, leeks, and cabbage: the makings of a great winter garden! One of the best ways to reap the most from a small-space food garden is to have something growing in your garden all year round. Don’t let plots or containers sit vacant after you harvest your tomatoes and squash! Planting hardy and fast-maturing crops in summer or early fall for fall-through-spring harvesting is often known as winter gardening. For both, you’ll want to start now. ‘Sorrento’ broccoli raab In general, you’ll want to plant quick-maturing, cool-season crops that are tolerant of frosts. Surprisingly, there are quite a few edibles you can start from seed now. Great winter-garden edibles to start from seed: Arugula. Asian and mustard greens. Broad beans. Broccoli raab. Carrots. Cilantro. Green onions (scallions). Corn salad (mache or lamb’s lettuce). Endive. Kohlrabi. Lettuces. Spinach. Turnips. ‘Tyee’ spinach Broccoli Brussels sprouts Cabbage Cauliflower Chard Collard greens Leeks Kale Finally, there’s garlic.

Lunar Planting What if we told you that mowing your lawn on certain days would mean you could mow less often? Before you roll your eyes, think about it. The moon influences more than the ocean tides. Just ask any bar worker, clergyman or nurse. In fact, my friend Emma braces herself before going to work. Many scientists insist that the myth that a full moon affects the behavior of humans, animals and plants is a bunch of baloney. Before I go further, let me tease you with a possibility: What if mowing your lawn during certain phases of the moon retarded growth which meant you didn't have to mow as often? According to a National Geographic news article more gardeners today are turning to the moon for sage advice on the best time to plant, prune, weed, and harvest. Gardening by the moon is as old as time. Moon gardening has been passed down through many generations. The moon controls ocean tides, influences the groundwater tables beneath our feet and the movement of fluids in plants.

Guide to planting by the moon - The Gardeners Calendar Moon planting calendar for fruit, vegetables and flowers In ancient times when man had not quite got round to inventing the wristwatch, the most reliable source of telling the time was the sun, moon, and stars. There seems to be several opinions of who came up with the moon planting calendar first. Was it the Egyptians or the Babylonians? It is more than likely that each and every farmer had a planting calendar based on the moon phases, and there would be different variations depending on the geographical location. It was noticed that different plants grow better when they are planted during different phases of the moon. To provide more accurate records it was noted that certain crops faired better when planted whilst the moon was in a specific constellation. Planting was not the most important time for the farmer, harvest time also had to be recorded. Moon planting rediscovered Three Moon planting methods There are three methods for planting by the moon. Synodic (waxing and waning) cycle

Gardening by the Phases of the Moon The moon has four phases or quarters lasting about seven days each. The first two quarters are during the waxing or increasing light, between the new and the full moon. The third and fourth quarters are after the full moon when the light is waning, or decreasing. Planting by the moon is an idea as old as agriculture, based both in folklore and superstition, but there are scientific ideas to back it up The Earth is in a large gravitational field, influenced by both the sun and moon. For more information about how lunar planting works, including research and references, continue on to the next page, or skip to the topic of your choice. At the new moon, the lunar gravity pulls water up, and causes the seeds to swell and burst. In the second quarter the gravitational pull is less, but the moonlight is strong, creating strong leaf growth. After the full moon, as the moon wanes, the energy is drawing down.