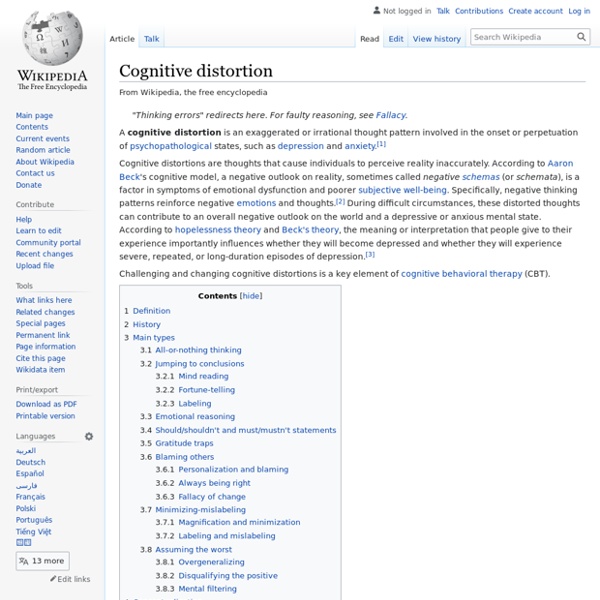 Psychiatrist Aaron T. Beck who laid the groundwork for research on cognitive distortion. An exaggerated or irrational thought pattern involved in the onset and perpetuation of psychopathological states Challenging and changing cognitive distortions is a key element of cognitive behavioral therapy (CBT). Definition[edit] Cognitive comes from the Medieval Latin cognitīvus, equivalent to Latin cognit(us), 'known'.[5] Distortion means the act of twisting or altering something out of its true, natural, or original state.[6] History[edit] In 1957 Albert Ellis, though he did not know it yet, would aid cognitive therapy in correcting cognitive distortions and indirectly helping David D. When Burns published Feeling Good: The New Mood Therapy, it made Beck's approach to distorted thinking widely known and popularized.[13][14] Burns sold over four million copies of the book in the United States alone. Main types[edit] All-or-nothing thinking[edit] Overgeneralizing[edit] Filtering[edit] Criticism[edit] Related:  Inner Search

Origin of language The origin of language in the human species has been the topic of scholarly discussions for several centuries. In spite of this, there is no consensus on the ultimate origin or age of human language. One problem makes the topic difficult to study: the lack of direct evidence. Consequently, scholars wishing to study the origins of language must draw inferences from other kinds of evidence such as the fossil record or from archaeological evidence, from contemporary language diversity, from studies of language acquisition, and from comparisons between human language and systems of communication existing among other animals, particularly other primates. It is generally agreed[by whom?] This shortage of empirical evidence has led many scholars to regard the entire topic as unsuitable for serious study. Approaches[edit] Approaches to the origin of language can be divided according to their underlying assumptions. Noam Chomsky is a prominent proponent of discontinuity theory. Bow-wow.

Outline of thought Nature of thought[edit] Thought (or thinking) can be described as all of the following: An activity taking place in a: brain – organ that serves as the center of the nervous system in all vertebrate and most invertebrate animals (only a few invertebrates such as sponges, jellyfish, adult sea squirts and starfish do not have a brain). It is the physical structure associated with the mind. mind – abstract entity with the cognitive faculties of consciousness, perception, thinking, judgement, and memory. Types of thoughts[edit] Types of thought (thinking)[edit] Listed below are types of thought, also known as thinking processes. Animal thought[edit] See Animal cognition Human thought[edit] Human thought Classifications of thought[edit] Williams' Taxonomy Creative processes[edit] Creative processes – Decision-making[edit] Decision-making Erroneous thinking[edit] see Error for some examples, see also Human error) Emotional intelligence (emotionally-based thinking)[edit] Emotional intelligence – Problem solving

Defence mechanisms A defence mechanism is a coping technique that reduces anxiety arising from unacceptable or potentially harmful impulses.[1] Defence mechanisms are unconscious and are not to be confused with conscious coping strategies.[2] Sigmund Freud was one of the first proponents of this construct.[3] Healthy persons normally use different defences throughout life. An ego defence mechanism becomes pathological only when its persistent use leads to maladaptive behaviour such that the physical or mental health of the individual is adversely affected. The purpose of ego defence mechanisms is to protect the mind/self/ego from anxiety and/or social sanctions and/or to provide a refuge from a situation with which one cannot currently cope.[9] One resource used to evaluate these mechanisms is the Defense Style Questionnaire (DSQ-40).[10][11] Structural model: Id, ego, and superego[edit] Freud believed that conflicts between these two structures resulted in conflicts associated with psychosexual stages.

Wisdom of repugnance Origin and usage[edit] The term "wisdom of repugnance" was coined in 1997 by Leon Kass, chairman (2001–2005) of the President's Council on Bioethics, in an article in The New Republic,[3] which was later expanded into a further (2001) article in the same magazine,[4] and also incorporated into his 2002 book Life, Liberty, and the Defense of Dignity.[5] Kass stated that disgust was not an argument per se, but went on to say that "in crucial cases...repugnance is the emotional expression of deep wisdom, beyond reason's power fully to articulate it." The term remains largely confined to discussions of bioethics, and is somewhat related to the term "yuck factor". However, unlike the latter, it is used almost exclusively by those who accept its underlying premise; i.e., that repugnance does, in fact, indicate wisdom. Criticism[edit] Martha Nussbaum explicitly opposes the concept of a disgust-based morality. See also[edit] References[edit]

List of thought processes Nature of thought[edit] Thought (or thinking) can be described as all of the following: An activity taking place in a: brain – organ that serves as the center of the nervous system in all vertebrate and most invertebrate animals (only a few invertebrates such as sponges, jellyfish, adult sea squirts and starfish do not have a brain). Types of thoughts[edit] Content of thoughts[edit] Types of thought (thinking)[edit] Listed below are types of thought, also known as thinking processes. Animal thought[edit] See Animal cognition Human thought[edit] Human thought Classifications of thought[edit] Williams' Taxonomy Creative processes[edit] Creative processes – Decision-making[edit] Decision-making Erroneous thinking[edit] see Error for some examples, see also Human error) Emotional intelligence (emotionally based thinking)[edit] Emotional intelligence – Problem solving[edit] Problem solving Reasoning[edit] Reasoning – Machine thought[edit] Machine thought (outline) Organizational thought[edit] Organizations[edit] Lists

Function (engineering) In the lifecycle of engineering projects, there are usually distinguished subsequently: Requirements and Functional specification documents. The Requirements usually specifies the most important attributes of the requested system. In the Design specification documents, physical or software processes and systems are frequently the requested functions. For advertising and marketing of technical products, the number of functions they can perform is often counted and used for promotion. For example a calculator capable of the basic mathematical operations of addition, subtraction, multiplication, and division, would be called a "four-function" model; when other operations are added, for example for scientific, financial, or statistical calculations, advertisers speak of "57 scientific functions", etc. A wristwatch with stopwatch and timer facilities would similarly claim a specified number of functions. Jump up ^ R.Barker, C.

Fallacy A fallacy is the use of poor, or invalid, reasoning for the construction of an argument.[1][2] A fallacious argument may be deceptive by appearing to be better than it really is. Some fallacies are committed intentionally to manipulate or persuade by deception, while others are committed unintentionally due to carelessness or ignorance. Fallacies are commonly divided into "formal" and "informal". Formal fallacy[edit] Main article: Formal fallacy A formal fallacy is a common error of thinking that can neatly be expressed in standard system of logic.[1] An argument that is formally fallacious is rendered invalid due to a flaw in its logical structure. The presence of a formal fallacy in a deductive argument does not imply anything about the argument's premises or its conclusion. Common examples[edit] Aristotle's Fallacies[edit] Aristotle was the first to systematize logical errors into a list. Whately's grouping of fallacies[edit] Intentional fallacies[edit] Deductive fallacy[edit]