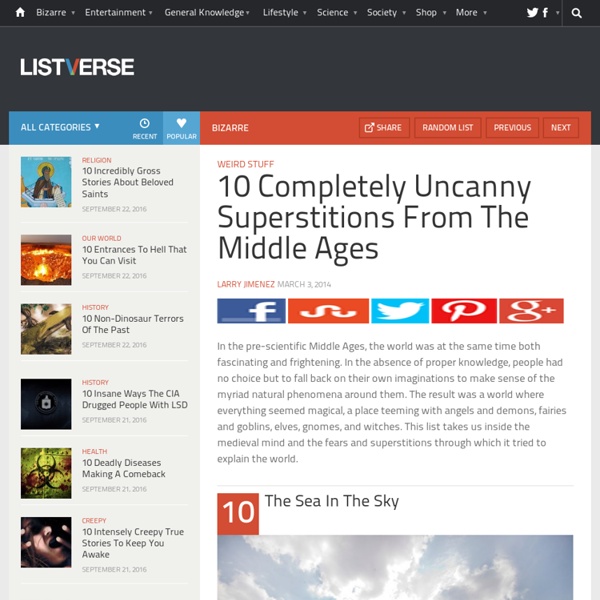 Weird Stuff In the pre-scientific Middle Ages, the world was at the same time both fascinating and frightening. In the absence of proper knowledge, people had no choice but to fall back on their own imaginations to make sense of the myriad natural phenomena around them. 10 The Sea In The Sky For this story, we are indebted to English chronicler Gervase of Tilbury and his work Otia Imperiala. For proof, Gervase offers an episode that took place in an English village. Another tale concerns a merchant who accidentally dropped his knife while out at sea. 9 Omens Of Charlemagne’s Death The Frankish king Charlemagne was crowned Holy Roman Emperor in A.D. 800. During his last Saxon campaign against the Danes, Charlemagne himself saw a ball of fire appear and rush across the sky as he was leaving camp at sunrise. 8 Magonia UFO enthusiasts are likely to interpret the ball of fire seen by Charlemagne in the above story to be an alien spacecraft. 7 Changelings 6 The Royal Touch 5 The Wild Man Of Orford

Health and Medicine in Medieval England Health and medicine in Medieval England were very important aspects of life. For many peasants in Medieval England, disease and poor health were part of their daily life and medicines were both basic and often useless. Towns and cities were filthy and knowledge of hygiene was non-existent. The Black Death was to kill two thirds of England’s population between 1348 and 1350. In 1349, Edward III complained to the Lord Mayor of London that the streets of the city were filthy: No one knew what caused diseases then. Other theories put forward for diseases included “humours”. Astronomers blamed the planets going out of line As important, no-one knew how diseases spread – the fact that people lived so close together in both villages and towns meant that contagious diseases could be rampant when they appeared; as happened with the Black Death. Physicians were seen as skilled people but their work was based on a very poor knowledge of the human anatomy. Operations were carried out by ‘surgeons’.

10 Bizarre Medieval Medical Practices Creepy Medicine is one of the cornerstones of modern civilization—so much so that we take it for granted. It wasn’t always the case that you could just waltz into a doctor’s office to have them cure what ailed you. In medieval times, for example, things were a lot more dangerous, and a lot stranger. 10 Boar Bile Enemas Enemas in medieval times were performed by devices called clysters. Even kings were high up on the clyster. 9 Urine Was Used As An Antiseptic Though it may not have been common, there is evidence to suggest that urine was occasionally used as an antiseptic in the Medieval Era. This isn’t quite as insane as it seems: urine is sterile when it leaves the body and may have been a healthier alternative than most water—which came with no such guarantee of cleanliness. 8 Eye Surgery (With A Needle) During the Middle Ages, cataract surgery was performed with a thick needle. Of course, eye surgery changed rapidly once Islamic medicine began to influence European practices. 4 Trepanning

The Wildman of Orford | Suffolk Folk Tales by Kirsty Hartsiotis Orford’s Wildman has become a symbol for the small coastal village. He was a man of the sea who was pulled up by 12th century fishermen’s nets and held captive in the bang-new castle until he finally made his escape. He’s featured in the interpretation in the castle where his sad incarceration took place. There’s a memorial to him on the Market Square, and he features on the Butley Orford Oysterage and on Pinney’s as you walk down to the quay. Three stories in Suffolk Folk Tales, the Green Children, Malekin and the Wildman of Orford, come from the same early source. Wildmen are a common trope in the Middle Ages. The woods are places where civilised men don’t go – knights discover monsters and marvels in the woods in Arthurian romances. You might ask what all this has to do with Ralph’s man from the sea. How true is the story? It is presumably St Bartholomew’s that the wildman is taken into – although whether the church was complete enough by then I don’t know. Note: Like this:

A Brief History of Bloodletting - History in the Headlines The ancient practice of bloodletting might offer cardiovascular benefits to obese people with metabolic syndrome, a new study published today in the journal BMC Medicine suggests. As the medical community contemplates its revival, explore this long-abandoned procedure’s age-old history, from its early roots to its use on figures such as George Washington and Marie-Antoinette. Several thousand years ago, whether you were an Egyptian with migraines or a feverish Greek, chances are your doctor would try one first-line treatment before all others: bloodletting. He or she would open a vein with a lancet or sharpened piece of wood, causing blood to flow out and into a waiting receptacle. If you got lucky, leeches might perform the gruesome task in place of crude instruments. Considered one of medicine’s oldest practices, bloodletting is thought to have originated in ancient Egypt. America’s first president was less fortunate than France’s most infamous queen.