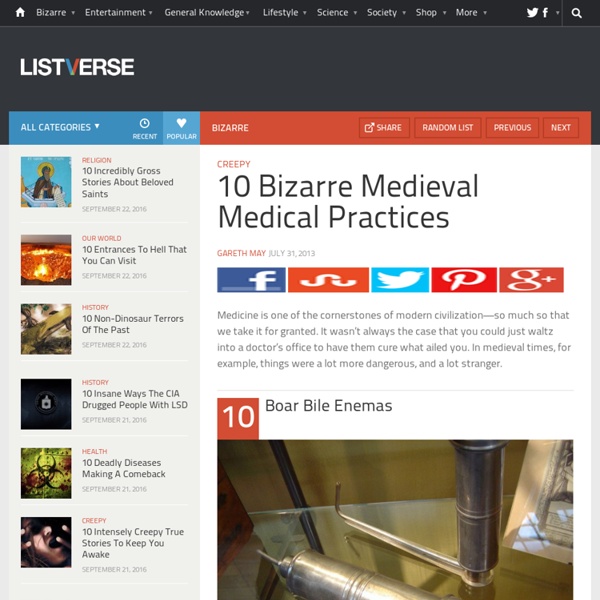 Creepy Medicine is one of the cornerstones of modern civilization—so much so that we take it for granted. It wasn’t always the case that you could just waltz into a doctor’s office to have them cure what ailed you. In medieval times, for example, things were a lot more dangerous, and a lot stranger. 10 Boar Bile Enemas Enemas in medieval times were performed by devices called clysters. Even kings were high up on the clyster. 9 Urine Was Used As An Antiseptic Though it may not have been common, there is evidence to suggest that urine was occasionally used as an antiseptic in the Medieval Era. This isn’t quite as insane as it seems: urine is sterile when it leaves the body and may have been a healthier alternative than most water—which came with no such guarantee of cleanliness. 8 Eye Surgery (With A Needle) During the Middle Ages, cataract surgery was performed with a thick needle. Of course, eye surgery changed rapidly once Islamic medicine began to influence European practices. 4 Trepanning

The Most Painful Medical Procedures Of Medieval Times Painful Medical Procedures Of Medieval Times: Trepanning Eclipsing the lobotomy in terms of age and pain, trepanning involved a physician cutting a hole into the skull of an individual suffering from what some believed to be mental illness, seizures or skull fractures. The hole was typically cut into the dura mater and, surprisingly, the survival rate was very high and chance of infection remained low. Metallic Catheters JoMA Archives: Nonfiction : Fairy Changelings by Terri Windling "Come away, O human child!" call the fairies in a poem by William Butler Yeats inspired by Irish folktales of children abducted to fairyland. Yeats was a folklore enthusiast and a life-long believer in the fairy folk.

Ancient History Encyclopedia Trephination (also known as trepanning or burr holing) is a surgical intervention where a hole is drilled, incised or scraped into the skull using simple surgical tools. In drilling into the skull and removing a piece of the bone, the dura mater is exposed without damage to the underlying blood-vessels, meninges and brain. Trephination has been used to treat health problems associated with intracranial diseases, epileptic seizures, migraines and mental disorders by relieving pressure. 10 Completely Uncanny Superstitions From The Middle Ages Weird Stuff In the pre-scientific Middle Ages, the world was at the same time both fascinating and frightening. In the absence of proper knowledge, people had no choice but to fall back on their own imaginations to make sense of the myriad natural phenomena around them. The result was a world where everything seemed magical, a place teeming with angels and demons, fairies and goblins, elves, gnomes, and witches.

Tony Robinson on the top five superstitions that gripped medieval Britain Ancient Britons didn’t despatch people willy-nilly, but in times of crisis – if a whole community was rocked by plague, say – then they might decide to sacrifice somebody as a way of bartering with the gods. In some cases, a wicker pyre in the shape of a man would be stuffed with animals and even human offerings. We can trace this practice back to Celtic times. The Hole Story on Trepanation Hippocrates endorsed its use and it’s the world’s second oldest surgical procedure following circumcision. It’s called trepanation and it literally means drilling a hole in your head. And if you think it’s a bygone practice, think again. The practice of making a hole in the skull has been around since the Stone Age — archaeologists have found trepanned skulls dating back to 3000 B.C. Hippocrates, in his classic medical text “On Injuries of the Head,” endorsed trepanation for the treatment of head wounds.

Medieval Doctors Used To Diagnose Their Patients By Smelling And Tasting Their Urine MARCH 18, 2015 — By Mike Cahill Mike Cahill Mike is ViralNova's resident Editor of the Weird. If it makes you say "OMG! Top ten haunted places in the UK 1. Highgate Cemetery, London The spectacular gothic architecture on show at this Victorian necropolis is eerie enough but in the late 60s bizarre rumours circulated of a tall, dark figure with hypnotic red eyes terrorising passersby. Amid stories of fearful schoolgirls and mutilated animals, it didn't take long for received wisdom to declare the fiend a vampire. At least as extraordinary as the idea of the undead stalking N6 was the bitter feud between two locals, exorcist Sean Manchester and occultist David Farrant, who both swore they would hunt down and terminate the ghoul. Nowadays, only the simultaneous opening of several gastropubs would cause a run on garlic.

Medicine in the Middle Ages Medical knowledge in the Middle Ages must have appeared to have stood still. While the Ancient Romans,Greeks and Egyptians had pushed forward medical knowledge, after the demise of these civilisations, the momentum started by these people tended to stagnate and it did not develop at the same pace until the Seventeenth/Eighteenth Centuries. In Britain, as an example, most things linked to the Romans was destroyed – villas were covered up as the Ancient Britons believed that they contained ghosts and evil spirits. With this approach, it is not surprising that anything medical linked to the Romans fell into disuse in Britain. By the 14th Century, universities had developed in Western Europe that could be classed as medical schools where students could study under a master physician. The University of Montpelier was one such university.