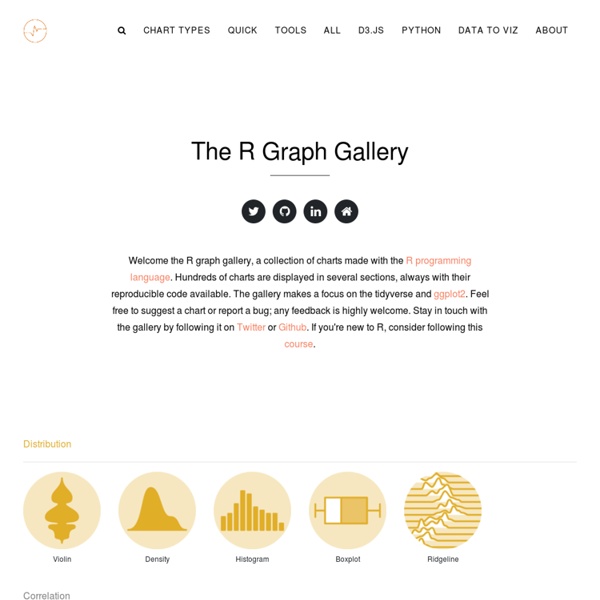 d3panels This is a set of D3-based graphic panels, developed for the R/qtlcharts package but useful more generally. They are developed in CoffeeScript; the source is on GitHub. Update: The d3panels library has been completely re-written, changing the functions’ usage and data structures, to make it simpler and more consistent. Documentation on GitHub. Click on a panel for a corresponding interactive illustration.

ModernDive Getting Started - For Students This book was written using the bookdown R package from Yihui Xie (Xie 2016). In order to follow along and run the code in this book on your own, you’ll need to have access to R and RStudio. You can find more information on both of these with a simple Google search for “R” and for “RStudio.” An introduction to using R, RStudio, and R Markdown is also available in a free book here (Ismay 2016). It is recommended that you refer back to this book frequently as it has GIF screen recordings that you can follow along with as you learn.

Exploratory Data Analysis Using R (Part-I) The greatest value of a picture is when it forces us to notice what we never expected to see. — John W. Tukey. Exploratory Data Analysis. Why do we use exploratory graphs in data analysis? Understand data propertiesFind patterns in dataSuggest modeling strategies“Debug” analyses Chartist - Simple responsive charts You may think that this is just yet an other charting library. But Chartist.js is the product of a community that was disappointed about the abilities provided by other charting libraries. Of course there are hundreds of other great charting libraries but after using them there were always tweaks you would have wished for that were not included. Highly customizable responsive charts

Comparing ggplot2 and R Base Graphics In R, the open source statistical computing language, there are a lot of ways to do the same thing. Especially with visualization. R comes with built-in functionality for charts and graphs, typically referred to as base graphics. Top Programming Languages Trends: The Rise of Big Data Now that IEEE Spectrum is into the third year of annually ranking languages, we can start looking at some trends over time. What languages are ascendant? Which are losing traction? Explore R and ScaleR in 25 functions If you are new to both R and Microsoft R, this brief tutorial introduces you to 25 (or so) of the more commonly used R functions. In this tutorial, you'll learn how to load small data sets into R and perform simple computations. This tutorial starts with base R commands before transitioning to ScaleR functions in Microsoft R. If you already know R, you might want to skip ahead to Explore ScaleR Functions.

Visualization of Relationship Data Before uploading a data file, check the samples gallery to make sure that your data format is compatible. Your file must be plain text. Your data values must be non-negative integers. Data must be space-separated (one or more tab or space, which will be collapsed). Moving Past Default Charts For static data graphics my workflow typically involves R and Illustrator at varying degrees. I covered the process in Visualize This and provided an introduction on how to do the same with Inkscape, Illustrator's open source counterpart. However, you don't always have to use illustration software to produce more readable graphics. You can stay in R, tweak a few variables, and it might be all you need. If not, you can at least get closer to what you want, which makes for less post-editing. In this tutorial you learn what parameters to change to mimic a handful of popular chart styles.

Top 10 TED Talks for the Data Scientists TED is a nonprofitable organization devoted to Ideas Worth Spreading – through TED.com, they also schedule annual conferences, and local TEDx events. TEDTalks shares the best ideas from the TED Conference with the world, for free: trusted voices and convention-breaking mavericks, icons and geniuses, all giving the talk of their lives in 18 minutes. Data science has been in center of many of these talks. Here, we have collected top 10 of them based on the number of views. The best stats you’ve ever seen (views: 10,406,507) You’ve never seen data presented like this. With the drama and urgency of a sportscaster, statistics guru Hans Rosling debunks myths about the so-called “developing world.”How I hacked online dating (views: 4,432,687) Amy Webb was having no luck with online dating.

GrapheR: A GUI for base graphics in R How did I miss the GrapheR package? The author, Maxime Hervé, published an article about the package [1] in the same issue of the R Journal as we did on googleVis. Yet, it took me a package update notification on CRANbeeries to look into GrapheR in more detail - 3 years later! And what a wonderful gem GrapheR is. The package provides a graphical user interface for creating base charts in R. R Tutorial R is a programming language and software environment for statistical analysis, graphics representation and reporting. R was created by Ross Ihaka and Robert Gentleman at the University of Auckland, New Zealand, and is currently developed by the R Development Core Team. R is freely available under the GNU General Public License, and pre-compiled binary versions are provided for various operating systems like Linux, Windows and Mac. This programming language was named R, based on the first letter of first name of the two R authors (Robert Gentleman and Ross Ihaka), and partly a play on the name of the Bell Labs Language S.

7 Visualizations You Should Learn in R With ever increasing volume of data, it is impossible to tell stories without visualizations. Data visualization is an art of how to turn numbers into useful knowledge. R Programming lets you learn this art by offering a set of inbuilt functions and libraries to build visualizations and present data. Before the technical implementations of the visualization, let’s see first how to select the right chart type. Selecting the Right Chart Type