Economy Of Fashion: How Different Trends Reflect The Financial State 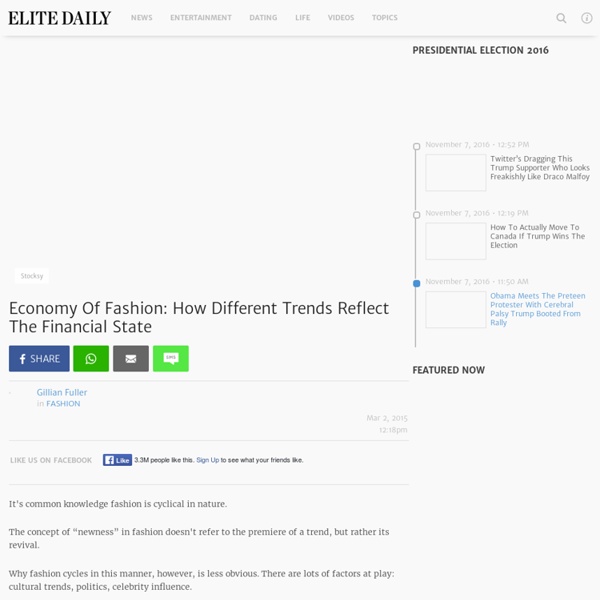 It's common knowledge fashion is cyclical in nature. The concept of “newness” in fashion doesn't refer to the premiere of a trend, but rather its revival. Why fashion cycles in this manner, however, is less obvious. There are lots of factors at play: cultural trends, politics, celebrity influence. One one of the most surprising factors to influence the cycle of fashion, though, is the state of the global economy. If you think about it, it makes sense. During tougher times, if you need new clothes, the focus is less on passing fads and more on classic, quality pieces worth the expenditure because they’ll last (which also aids in cutting down cost per wear). As FIT professor John Mincarelli tells ABC News, “In rough economic times, people shop for replacement clothes,” adding “basics” prevail during an economic downturn. Economist George Taylor was the first to notice the correlation between fashion and the economy; he developed the “Hemline Theory” to describe his findings. Pinterest How?

Mobos 2016: A look at the resurgence of grime as Skepta and Kano dominate nominations Ten years ago, it would have been unfathomable that grime collective Boy Better Know could headline a major music festival like London's Wireless. Well, that is exactly what happened in July 2016, proving just how prominent the grime genre has become – again – over the last year. As the Mobo Awards 2016 prepare to get underway, IBTimes UK looks back at how the tough-as-nails genre was able to rise from the ashes. Any youngster with a passion for British music will undoubtedly cite Skepta as one of their standout artists of 2016. And rightfully so because, just as much as grime is enjoying a resurgence, Boy Better Know's co-founder has also been granted another turn in the spotlight. The grime god dropped his highly-anticipated second album, Konnichiwa, in April and it was absolutely worth the wait.

Rising costs pile on the agony for Britain’s fashion retailers From culottes to “cold shoulder” tops and woven loafers last seen in Miami Vice, many Britons have struggled with this summer’s fashions, but now there is an even more unpalatable trend on the horizon – in the shape of higher prices. The devaluation of sterling following the June Brexit vote has had major ramifications for store chiefs who pay in dollars for large quantities of imported goods. The first indication of where prices could be heading came last week from Next, one of the UK’s biggest clothing retailers, which pencilled in increases of up to 5% in 2017. “We have always taken the view that if our costs go up, our selling prices will go up,” said Next chief executive Lord Wolfson.

5 things you probably didn’t know about the fashion industry Mark Twain once wrote, “Clothes make the man. Naked people have little or no influence on society.” Whether we’re one of the millions of people employed by the sector or just someone who likes to shop on Fifth Avenue or in second-hand stores, we are all touched by the fashion industry. Before the early autumn ushers in fashion weeks around the world, here are five things about the global fashion industry you probably didn’t know: Britain Now World's Cheapest Luxury Market LONDON, United Kingdom — In the wake of Britain's vote to leave the EU, which pushed down the value of the pound about 10 percent against the euro, the country has become the cheapest luxury goods market in the world, helping to buoy British luxury labels, at least in the short term, according to new research by Luca Solca, the head of luxury goods at Exane BNP Paribas. "The Brexit vote has made the UK the cheapest market in the world for luxury goods,” Solca told BoF. “A weak British pound will boost travel inflows to the UK, helping British luxury goods players like Burberry, Mulberry and Jimmy Choo."

Stormzy: ‘My man Jeremy Corbyn! I dig what he says' Before Stormzy became the most talked-about new rapper in the UK, before Adele was shouting him out on stage, before he was the odds-on favourite to record England’s official Euro 2016 song, he was Michael Omari, a kid who lived for badges. Omari would spend school holidays in Thornton Heath library in Croydon, which ran a scheme called Book Trail. “You read a book, write a detailed review as proof you’ve read it and they give you a badge,” the MC explains. “That’s where my competitive nature came out.

Primark blames the weather for falling sales Image copyright Getty Images A warm winter and a cold spring has been blamed for a fall in sales at low-cost fashion retailer Primark. Shoppers left winter clothes on the rails in the run up to Christmas due to unusually warm weather, and a cold March and April depressed sales of summer clothes. As a result Primark, like other stores, had to cut the price tag to sell them. The retailer expects like-for-like sales, which ignore new-store sales, to fall 2% for the year to 17 September. "If the weather's warm consumers make do with clothes from the previous year," said Maria Malone, principal lecturer for fashion business at Manchester Metropolitan University.

Two years after Rana Plaza, have conditions approved in Bangladesh’s factories? On 24 April 2013, an eight-story garment factory collapsed in Dhaka, the capital of Bangladesh. The building’s fall killed 1,134 people and injured hundreds of others. The Rana Plaza tragedy was not caused by an earthquake or a terrorist attack, but rather by poor construction and a lack of oversight – and, in some ways, by a growing global desire for more cheap fashion. It’s been two years since the Rana Plaza tragedy, and although much remains to be done to ensure the rights and safety of workers in Bangladesh’s still-booming garment industry, progress has been made. Global brands including H&M, Mango, Primark, the Gap and Walmart, among a dozen others, have contributed $21.5m to the Rana Plaza Donors Trust Fund, which was set up to award compensation to victims and their families. According to Srinivas Reddy, Bangladesh director for the International Labour Organization (ILO), which is administering the fund, there is a shortfall of $8.5m.

From Bankruptcy to Billions: Fashion’s Greatest Second (and Third) Acts United Kingdom — In fashion, nothing is permanent. Even when creative directors flee their posts or companies shutter their operations, opportunities for reinvention are often waiting just around the bend. Indeed, some of today's most successful fashion businesses went through years — and sometimes decades — of financial turmoil before achieving the level of global success they enjoy today. Stormzy: the 22-year-old grime spent time with GQ to talk about grime taking over the music industry A battle cry resonates across the car park. A mob of school kids hurtles towards the stationary, blacked-out Audi A5 like iron filings to a magnet, their eyes wide and white. Greedy hands snake through the windows. "We can smell it! We can smell it! Give us some!"

Fast Fashion Is the Second Dirtiest Industry in the World, Next to Big Oil - EcoWatch “The clothing industry is the second largest polluter in the world ... second only to oil,” the recipient of an environmental award told a stunned Manhattan audience earlier this year. “It’s a really nasty business ... it’s a mess.” Since 2011, the Greenpeace Detox campaign has challenged some of the world's most popular clothing brands to eliminate all releases of hazardous chemicals. Photo credit: Jonas Gratzer / Greenpeace While you’d never hear an oil tycoon malign his bonanza in such a way, the woman who stood at the podium, Eileen Fisher, is a clothing industry magnate. On a warm spring night at a Chelsea Piers ballroom on the Hudson River, Fisher was honored by Riverkeeper for her commitment to environmental causes.

A ‘Brexit’ Would Be Bad for Fashion LONDON, United Kingdom — When the topic first began to trickle into parliamentary debate in early 2015, the notion of Britain exiting the European Union seemed absurd. Indeed, if the idea of putting the matter to a direct public vote appeared unlikely, an actual “Brexit” seemed completely implausible. But 18 months later, with a national referendum just weeks away and public sentiment stirred up by an unprecedented migration crisis on top of the on-going European debt crisis, which has seen countries like Greece bailed out by the rest of the Eurozone, opinion polls on Brexit are much too close for comfort for British prime minister David Cameron, who has staked his political future on a “Remain” vote.

Stormzy speaks out on being active, political and fighting racism The grime icon says 'I'm ready to be a soldier' Getty Stormzy has revealed why it’s important for him to be politically active and outspoken as an artist, claiming that he’s “ready to be a solider”. The ever-rising grime hero has often made headlines for being opinionated, speaking out on institutionalised racism and police brutality, online racial slurs, as well as the BRIT Awards excluding grime. Mulberry luxury goods maker sees profit treble Image copyright Getty Images Luxury goods company Mulberry sees profits treble following switch to focus on more affordable products. The company, best known for its leather handbags, saw annual pre-tax profits in the year to 31 March jump from £1.9m to £6.2m. Sales rose by 5% to £155.9m.