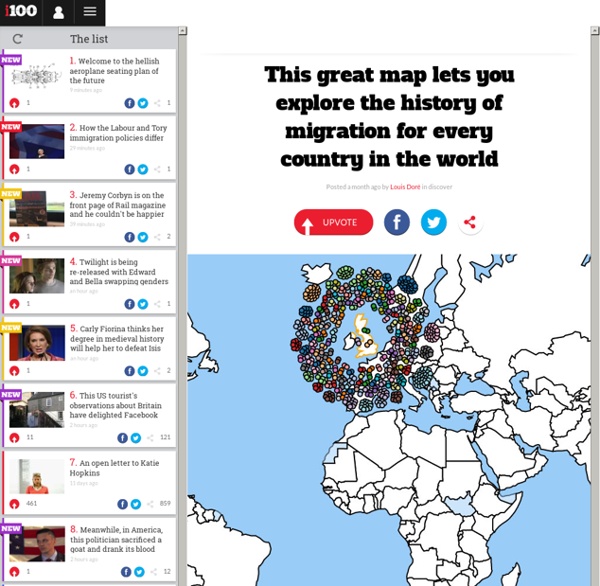 Amid all the recent clamour, arguments and figures regarding the refugee crisis and the wider, separate topic of immigration, it sometimes can be easy to get lost in all the numbers. The International Organisation for Migration has a visualisation which allows users to see at a glance the multinational make-up of countries' populations. Using data taken from the World Bank in 2010, it built a tool which helps users comprehend the numbers for inward and outward migration in each individual country. To use the visualisation, click on a country and see the pattern of migration to or from the nation. Each circle represents up to 20,000 people, which you can hover over to see the nationalities thereof. Note: To view the migration app you will require a modern web browser. More: Think Britain is a soft touch on immigration? More: An open letter to anyone who ever talked down the refugee crisis

The Most Beautiful and Famous Trees on Earth “A tree is a wonderful living organism which gives shelter, food, warmth and protection to all living things. It even gives shade to those who wield an axe to cut it down” – Buddha. There are probably hundreds of majestic and magnificent trees in the world – of these, some are particularly special: Organisation internationale pour les migrations The Where We're From interactive app tracks migrants around the world. This application is now being hosted by IOM.int. Its endlessly fascinating to explore where we're from. The underlying data for the map was published by the World Bank in 2010. We want to bring it up to date so please send your country migration data to ocu@iom.int. Soon there will be individual migration flow maps on IOM’s country pages as well.

6 Non-Teaching Books Every Teacher Should Read Posted 07/02/2015 8:20AM | Last Commented 07/22/2015 3:49PM A book promises the chance to escape the noise and busyness of our daily lives. In its pages we are never alone, yet we are also shut off, shut off from the thousand decisions and distractions that attack us at any moment. When we open ourselves up to a book we are embedded in the preciousness of ideas, growth, and mindful stimulation. Revelation A Revelation If we could shrink the earth's population to a village of precisely 100 people, with all the existing human ratios remaining the same, it would look something like the following: There would be: 57 Asians 21 Europeans 14 from the Western Hemisphere, both north and south 8 Africans

376 of the best one-liners on the internet - Page 2 of 15 (Page 2 of 15) One one-liner a day keeps the doctor away…so, here is a shortlist of the best one-liners you can find on the internet today. Have fun! 1. I asked God for a bike, but I know God doesn’t work that way. So I stole a bike and asked for forgiveness. Run an awesome startup? To Take Earth's Pulse, You Have to Fly High Ecologist Greg Asner and his team at the Carnegie Institution for Science can measure the biomass of a forest from the air. In this false-color video of Amazon rain forest in Peru, the biggest, heaviest trees are red, while yellow, green, and blue trees are progressively lighter. Carnegie's research aircraft is equipped with a scanning lidar—a laser ranging device that works like radar—and imaging spectrometers.Video by GREGORY ASNER, CARNEGIE INSTITUTION FOR SCIENCE How Do We Know It's Happening? To Take Earth’s Pulse, You Have to Fly High Satellite and airborne sensors won't cure the Earth.

Marcel Breuer Marcel Lajos Breuer (pronounced BROY-ər ;22 May 1902 – 1 July 1981), was a Hungarian-born modernist, architect and furniture designer of Jewish descent. One of the masters of Modernism, Breuer extended the sculptural vocabulary he had developed in the carpentry shop at the Bauhaus into a personal architecture that made him one of the world’s most popular architects at the peak of 20th-Century design. Life and work[edit] Known to his friends and associates as Lajkó (the diminutive of his middle name and pronounced LOY-ko), Breuer left his hometown at the age of 18 in search of artistic training and was one of the first and youngest students at the Bauhaus– a radical arts and crafts school that Walter Gropius had founded in Weimar just after the first World War. He was recognized by Gropius as a significant talent and was quickly put at the head of the Carpentry Shop. (Gropius was to remain a life-long mentor for his junior by 19 years.)