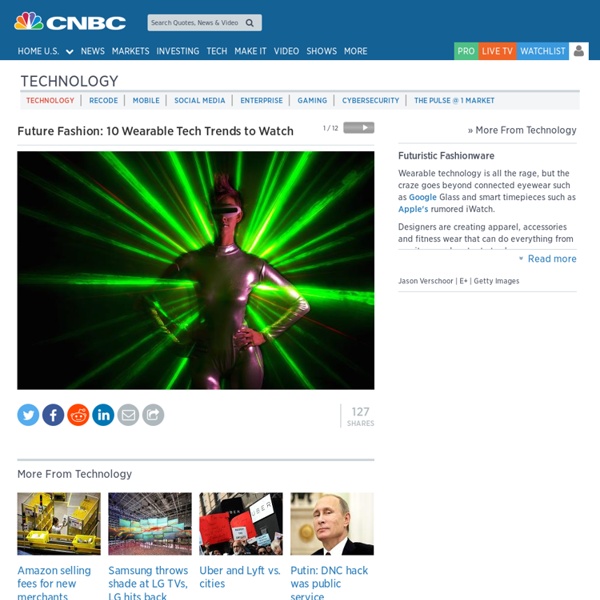 Economy Of Fashion: How Different Trends Reflect The Financial State It’s common knowledge fashion is cyclical in nature. The concept of “newness” in fashion doesn’t refer to the premiere of a trend, but rather its revival. Why fashion cycles in this manner, however, is less obvious. There are lots of factors at play: cultural trends, politics, celebrity influence. One one of the most surprising factors to influence the cycle of fashion, though, is the state of the global economy. Fashion’s big brands follow the money to join the wearable tech revolution We’ve all been there. You rush out of the house to catch the train to work, elbow your way into a seat and immediately reach for your smartphone. But it isn’t there. Cue sense of panic as you contemplate a day (an hour!) without being connected. But, in the future, as you look down in despair, you may suddenly realise that at the last minute you threw on your two-in-one ready-to-wear “smart” jacket with built-in phone and Twitter feed.

Fashion Design FIT in NYC: Worldwide leader in fashion education For many people around the world, fashion education means just one thing: FIT. Our Fashion Design program—one of FIT’s original degree programs—has been preparing students for success at every level, from haute couture to ready-to-wear to mass market, for 65 years. The program keeps evolving along with fashion itself, but some FIT traditions are forever: First, our close ties to the industry let us immerse you in what’s happening now in this fast-changing field. And our own brand of fashion education nurtures your creativity while providing a rigorous grounding in the practical and technical skills needed for career success, exposing you to the real demands and practices of the fashion world.

The Tech of Fashion: 10 Ways Technology Drives Tomorrow's Fashion View in gallery Like any other art, the long-term trends in fashion are often driven by advancements in technology. New materials merge with the old and new needs drive innovation while fashion slowly evolves. Fashion meets the future as garments go hi-tech Social media users curate the runway at Fyodor Golan's London Fashion Week show An interactive garment created by Nokia Lumias became the world's first interactive smart skirt Celebrities including Alexa Chung and Pixie Geldof whip out their smartphones on the front row at London Fashion Week Apple launched its smart watch in September, allowing users to call and message friends with a click on the device Ralph Lauren's biometric shirt tracks your body's data before sending it to your smartphone

MADE IN BRITAIN - Topshop Blog Featured Tis the season to be British – tralalalala… lalalala… With the Jubilee and the Olympics encouraging our patriotic tendencies, we thought it was high time classic, quintessential style hit the fashion headlines and thus, our new collection Made in Britain was born. Marrying tradition with innovation (because isn’t that so the British way?), every piece has been lovingly crafted in the heart of London’s East End to create a capsule collection that even the Queen herself would be proud of. Wearable devices: where fashion and technology collide With the launch of Samsung's Galaxy Gear and Google's Glass this year, wearable technology has reached a turning point. These devices may not look like fashion items, but they are simply the starting point for the wearable technology revolution which is set to sweep both the technology and fashion industries. O2 recently unveiled a series of designer handbags that double as phones as part of a project that illustrates the possibilities of gadget recycling. While these pieces are a light-hearted take on the category of wearable technology, they illustrate how the whole notion of wearable technology is growing. "The key to good product design is having a need for something, not creating something because you can," said designer Sean Miles, who created the bags. "We’re moving closer to a point where we want 24/7 access to whatever bit of technology or data we need to get access to, and the most obvious way to do that is to integrate it into an accessory or a piece of clothing.

The Future of Fashion is Now 'seeking for pure hearts' A conceivable and sustainable solution to convert livelihood and environmental issues into fashion design. In my commissioned work I focus on presenting craftsman’s excellent carving skill to support my design concept. It is a simple but very strong beginning to practice the forms of art. In my opinion, this kind of hand carving skill should be defined as a “new” technology since it has the ability to change itself with the time. For us, this technology is not difficult to learn or to use the only requirements to learn this skill are to be patience and peaceful hearted.

Fashion’s big brands follow the money to join the wearable tech revolution We’ve all been there. You rush out of the house to catch the train to work, elbow your way into a seat and immediately reach for your smartphone. But it isn’t there. "Technology is going to turn the entire fashion industry inside out" Fashion and technology: the digital revolution presents the "biggest challenge for fashion brands" according to digital fashion pioneer Francis Bitonti who asks: "How will an industry where value is communicated by exclusivity and craft cope with this new space?" (+ interview) The fashion industry has been slow to adapt to new technologies, says Bitonti, who warned: "Fashion brands are going to have to adapt to this, which is going to mean a shift in core values for many brands." The New York-based designer initially trained as an architect but has recently focussed on applying advanced manufacturing techniques to fashion, jewellery and accessories, including a 3D-printed dress for Dita von Teese and a pair of 3D-printed shoes.

Can big brands catch up on sustainable fashion? Imagine a pair of trousers you could throw on the compost. After years of use, they could decompose among the eggshells and tea bags to leave behind nothing but some fertile soil to help grow new raw materials. It takes the circular economy to a whole new level. This is the idea behind F-ABRIC, a range of materials developed by Swiss company Freitag. Future Of Fashion: Technology On The Catwalk By Tom Cheshire, Technology Correspondent One thing never goes out of fashion: talking about wearable technology at London Fashion Week. The jamboree shows up twice a year and technology is always at the forefront - whether it's Burberry live streaming their shows, or exotic LED dresses. Problem is that wearable technology has never been very wearable, nor very technological. Is this year any different? Well, perhaps we’re seeing wearable technology disappear, finally.