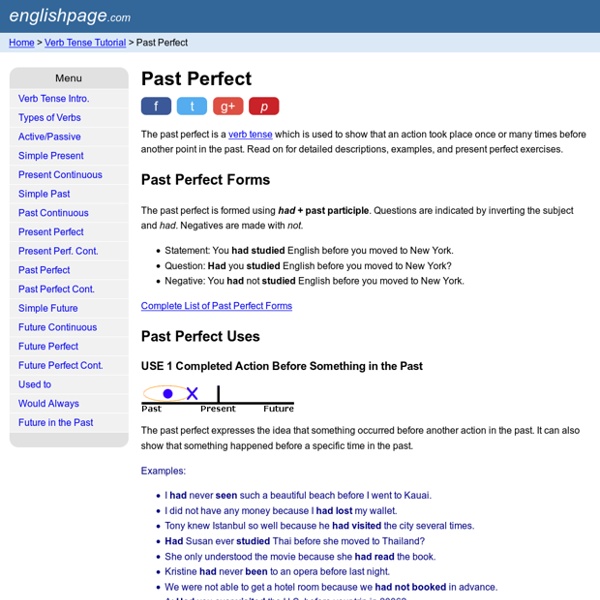 The past perfect is a verb tense which is used to show that an action took place once or many times before another point in the past. Read on for detailed descriptions, examples, and present perfect exercises. Past Perfect Forms The past perfect is formed using had + past participle. Questions are indicated by inverting the subject and had. Statement: You had studied English before you moved to New York. Complete List of Past Perfect Forms Past Perfect Uses USE 1 Completed Action Before Something in the Past The past perfect expresses the idea that something occurred before another action in the past. Examples: I had never seen such a beautiful beach before I went to Kauai. USE 2 Duration Before Something in the Past (Non-Continuous Verbs) With non-continuous verbs and some non-continuous uses of mixed verbs, we use the past perfect to show that something started in the past and continued up until another action in the past. We had had that car for ten years before it broke down. Example: Related:  ANGLAIS

Xochiquetzal and the Lunar Cult of Central Mexico | Susan Milbrath 32festival during Pachtontli took place at the altar of Huitzilopochtli, a solar god. is affiliated with butterflies and their solar symbolism. As we will see, Xocbiquetzal a lunar goddess who has solar connections, and she associatedwith a festival that links the calendar cycles thesun, moon, and Venus. Xochiquet.zaJ in the EthnohistoricaJ Sources Descriptions Xochiquetzal the early colonialperiod link ber with flowers. flowery quetzal featber," or "flower quetzal bird." Xochiquetzalwas the goddess flowers, and ber huipil was woven with flowers formed feathers and gold plaques (Durin :239,296). one tale. off part Xocbiquetzal's feminine member; Mictlantecuhtli washed it, and from the water came aU the fragrantflowers, the flowers especially linked with Xochiquetzal (Codex Magliabechiano 1983: v).Girls born during Xochiquetzal's trecena wouldbecome "bad wOlDeo" because Xochiquetzal was the first woman to sio (Codex. her to Diego .Dunin (1971: 68), XochiquetzaI seduced the virtuous ropiltzin-Quetzalcoatl. the harlot by a

Past Perfect The past perfect tense is often used in English when we are relating two events which happened in the past. It helps to show which event happened first. This page will explain the rules for forming and using the tense. Forming the past perfect tense This tense is formed using two components: the verb HAVE (in the past tense), and the past participle form of a verb. With a regular verb the past participle ends with -ED (just like the simple past). Using the Past Perfect The past perfect is used to show you which of two events happened first. Here, we don't know which order the events happened in. Here, we know that the discussion took place first — even though the sentence describing it comes afterwards. Here is another example: When you are sure that you understand the lesson, you can continue with the exercises.

Aztec Religion - Introduction Aztecs of Mexico History AZTEC STUDENT RESEARCH GUIDE (C)1997-2005 (Thomas H. Frederiksen) All rights reserved NOTE: 1/05 This section is a cut and paste from the larger work to better organize the study of the handful of major deities. While all deities had a function in the daily life of the Mexica, those presented here dominated. Visual representations of these deities can be found throughout Mexico today. TEZCATLIPOCA- "The Mirror That Smokes" "One Death" The creator God - The God of the Hunt - Patron of Princes - God of Providence. Also metaphorically referred to as Moyocoyatzin, (Capricious Creator), Titlacahuan, (He Whose Slaves we Are), Moquequeloa, (The Mocker) (*3), Moyocoyani, (Maker of Himself), Ipalnermoani, (Lord of the Near and the Nigh), Nahuaque, (Night Wind). Tezcatlipoca was also worshiped under the name Titlacahuan, "He Whose Slaves We Are", who was the master of human destiny. His name spelled properly is Tezcatl Ipoca, "Mirror that Smokes"(6). 11 Alacaron notes p. 231. God of suffering.

Present Perfect 2: Irregular Past Participles To make the present perfect, you need to use HAVE + PAST PARTICIPLE. The past participles of most verbs are formed using -ED, but some common verbs have unusual past participles. In this exercise, you can test your knowledge of irregular past participles. Click on the button beside the correct answer. Eat: You've ______ my lunch! Chirps, whistles, clicks: Do any animals have a true ‘language’? A colony of Brazilian free-tailed bats in College Station, Tex. Males establish territories within the aggregations and use song to defend territories and attract females. (Kirsten Bohn) From ultrasonic bat chirps to eerie whale songs, the animal kingdom is a noisy place. While some sounds might have meaning — typically something like “I'm a male, aren't I great?” A new study on animal calls has found that the patterns of barks, whistles, and clicks from seven different species appear to be more complex than previously thought. In fact, five species including the killer whale and free-tailed bat had communication behaviors that were definitively more language-like than random. “We're still a very, very long way from understanding this transition from animal communication to human language, and it's a huge mystery at the moment,” said study author and zoologist Arik Kershenbaum, who did the work at the National Institute for Mathematical and Biological Synthesis.

Verb Tenses in English - ESL Overview In English grammar, verb tenses or forms indicate the moment when something happens, such as the past, present, or future. These three primary forms can be subdivided further to add detail and specificity, such as whether the action is ongoing or to describe the order in which events occurred. For example, the present simple verb tense concerns actions that happen every day, while the past simple verb tense refers to something that happens in the past. In all, there are 13 tenses. Verb Tense Chart Here are simple explanations of the tenses in English that give the most common use of each tense in English. Simple present: things that happen every day. He usually goes for a walk every afternoon. Petra doesn't work in the city. Where do you live? Simple past: something that happened at some time in the past. Jeff bought a new car last week. Peter didn't go to the meeting yesterday. When did you leave for work? Simple future: paired with "will" to express a future act. They won't help you.

The Giant and the Waterbaby | Boom: A Journal of California by William J. Bauer, Jr. From Boom Winter 2012, Vol. 2, No. 4 Paiute oral traditions and the Owens Valley Water Wars In 1935, Susie Baker, an Owens Valley Paiute elder from Big Pine, California, told the following story: A giant approached the Alabama Hills, a range of small hills and protruding rock formations on the Valley’s southern edge.1 As the giant reached the hills, he screamed at the top of his great voice. The Alabama Hills. But the waterbaby, a spirit that lives in lakes, grew tired of the giant’s screaming, which had frightened him several times. There are multiple meanings to this story, not only for the Owens Valley Paiutes but for all who have an interest in the Owens Valley. Owens Lake. The aqueduct to which Susie Baker refers is, of course, the famous channel that siphoned water from the Owens Valley toward Los Angeles, and its construction was a seminal part of the Owens Valley Water Wars. The Water Wars Owens River. Identity and water The places of history Reframing time 1.

Visual Explanations of Each English Tense Present Simple The present simple is used to express daily routines and habits. Adverbs of frequency such as 'usually', 'sometimes', 'rarely', etc. are often used with the present simple. This tense is often used with the following time expressions: always, usually, sometimes, etc.... every day... on Sundays, Tuesdays, etc. Basic Construction Positive Subject + Present Tense + object(s) + time Expression Frank usually takes a bus to work. Negative Subject + do / does + not (don't / doesn't) + verb + object(s) + time Expression They don't often go to Chicago. Question (Question Word) + do / does + subject + verb + object(s) + time Expression How often do you play golf? If you are a teacher, see this guide on how to teach the present simple. Present Continuous for Action at the Moment One use of the present continuous tense is for action that is occurring at the moment of speaking. ... at the moment... now... today... this morning / afternoon / evening She's watching TV now. What are you doing? Past Simple