The Main Characteristics of Courtly Love 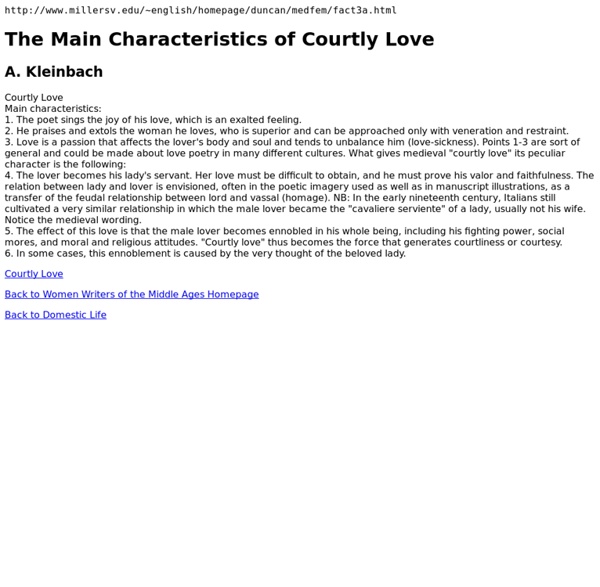 Courtly Love Main characteristics: 1. The poet sings the joy of his love, which is an exalted feeling. 2. He praises and extols the woman he loves, who is superior and can be approached only with veneration and restraint. 3. Love is a passion that affects the lover's body and soul and tends to unbalance him (love-sickness). Points 1-3 are sort of general and could be made about love poetry in many different cultures. What gives medieval "courtly love" its peculiar character is the following: 4. Courtly Love Back to Women Writers of the Middle Ages Homepage Back to Domestic Life

Courtly Love in the Middle Ages: Definition, Characteristics & Rules Explore this lesson on courtly love, an essential concept to understanding relationships between men and women in medieval literature. Learn the definition of courtly love, its connection with chivalry, the rules of courtly love, and discover examples of works that feature courtly love from the middle ages. Explore our library of over 10,000 lessons Click "next lesson" whenever you finish a lesson and quiz. Got It You now have full access to our lessons and courses.

The Canterbury Tales Looking back, it’s difficult to remember just when the idea came to create The Canterbury Tales, but it must have been around 1387. The work was never finished, but what was written amounted to about 17,000 lines, written for the most part in heroic couplets. In The Canterbury Tales, a party of twenty-nine pilgrims gathers at the Tabard Inn in Southwark in preparation for their pilgrimage to the shrine of Thomas Becket in Canterbury. The host of the inn proposes to go along on the pilgrimage as guide, and as a way to pass the time he suggests that the pilgrims each tell two stories on the way out and on the way back. That would mean a total of 116 tales all together. The pilgrim with the best stories would have a free dinner once all are returned to Southwark.

historical era Alternative titles: le moyen âge; media tempora; medium aevium Middle Ages, Britannica Classic: The Medieval MindEncyclopædia Britannica, Inc.the period in European history from the collapse of Roman civilization in the 5th century ce to the period of the Renaissance (variously interpreted as beginning in the 13th, 14th, or 15th century, depending on the region of Europe and on other factors). The term and its conventional meaning were introduced by Italian humanists with invidious intent; the humanists were engaged in a revival of Classical learning and culture, and the notion of a thousand-year period of darkness and ignorance separating them from the ancient Greek and Roman world served to highlight the humanists’ own work and ideals. In a ... (100 of 906 words)

Chivalry The Code of Chivalry & The Cult of Courtly Love Admittedly, the following "rules" are a composite ideal that never existed in actual historical practice, nor can one find an exact list like this one. What one can find are examples like the one by Capellanus below. Nonetheless, this basic model can give one of sense of the kind of things that chivalric writers prized. Basic Rules of the Cult of Love The lover looks on the beloved as one who is higher and can be approached only with a suppressed awe and wonder. Geoffrey Chaucer Geoffrey Chaucer (born 1340/44, died 1400) is remembered as the author of The Canterbury Tales, which ranks as one of the greatest epic works of world literature. Chaucer made a crucial contribution to English literature in using English at a time when much court poetry was still written in Anglo-Norman or Latin. Geoffrey Chaucer was born in London. He was the son of a prosperous wine merchant and deputy to the king's butler, and his wife Agnes.

Medieval Period - Where Did it All Begin? The term "medieval" comes from the Latin meaning "middle age." The term medieval (originally spelled mediaeval) wasn't introduced into English until the 19th century, a time when there was heightened interest in the art, history and though of the Middle Ages. There is some disagreement about when the Medieval Period started, whether it began in the 3rd, 4th, or 5th century AD. Most scholars associate the beginning of the period with the collapse of the Roman empire, which began in 410 AD. Scholars similarly disagree about when the period ends, whether they place the end at the start of the 15th century (with the rise of the Renaissance Period), or in 1453 (when Turkish forces captured Constantinople).

Medieval History, Castles MedievalPlus.com The Middle Ages is a period in European history which, along with its adjective ‘Medieval’, was first referred to by italian scholars and academics of the late fifteenth century. They were basically stating that the society in which they now lived was significantly more civilized and advanced in many ways, than that which had existed during the previous thousand years. This may have been true within certain elite sections of Italian society which had begun to emulate the art and philosophy of ancient Greece, but generally in Italy and Europe overall no all-pervading change had occurred. Historians since that time have, however, used the terms 'middle ages' and medieval as a convenient way to refer to that general period in European history. It has been regarded as extending approximately from the end of the fifth century AD, when the control of the Roman Empire had ended, until the end of the fifteenth century AD, when the modern world was considered to have begun.

Medieval Poems Poems during the medieval era were religious in nature and written by clerics. They were used mostly in church and other religious events. Medieval poems were mainly read by troubadours and minstrels.