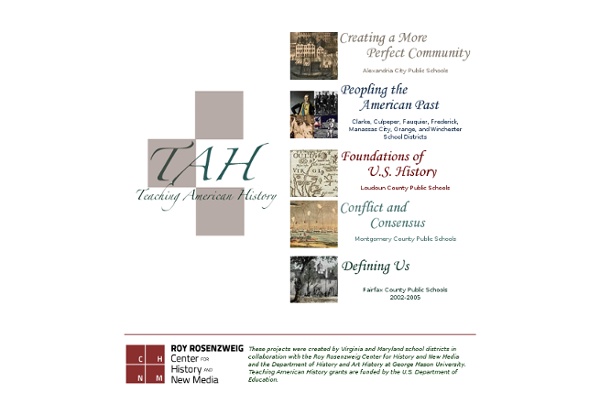 A Journey Towards Freedom As of July 1, 2013 ThinkQuest has been discontinued. We would like to thank everyone for being a part of the ThinkQuest global community: Students - For your limitless creativity and innovation, which inspires us all. Teachers - For your passion in guiding students on their quest. Partners - For your unwavering support and evangelism. Parents - For supporting the use of technology not only as an instrument of learning, but as a means of creating knowledge. We encourage everyone to continue to “Think, Create and Collaborate,” unleashing the power of technology to teach, share, and inspire. Best wishes, The Oracle Education Foundation

"A society of patriotic ladies." Cheap prints depicting current events were in great demand in both England and the colonies. This 1775 British print presented a scene in Edenton, North Carolina. Fifty-one women signed a declaration in support of nonimportation, swearing not to drink tea or purchase other British imports. Boycotts of British goods became a widespread form of protest to the Townshend Duties, enacted in 1767 to tax goods such as paint, paper, lead, glass, and tea when they arrived in America. Abstaining from European products and fashions became a mark of patriotism, and merchants who violated nonimportation were subjected to public ridicule. Source: Philip Dawe(?)

Primary Source Documents For this entry, the previous subject matter was "Original Dictionaries of the 16th & 17th Centuries" and was linked to excellent work done at the University of Toronto. Time has marched on, links disappear. The works have matured and expanded. Lion (Lyon) Gardiner's legacy--; Diary of Lion Gardiner (1635) The Gardiner Family of Long Island - genealogy (1635) GARDINER, Lion -- American engineer (1635) The Constitution of Plymouth Colony (1636) The Salem Covenant (1636) The Dedham Covenant (1636) Winthrop's Testimony (1636), the Boston Governor's account of his Christian experience. SNAPSHOT OF EARLIEST AMERICAN COURT RECORDS, including information about crimes and punishments--; The Pynchon Court Record , and earliest Springfield Court records, 11 Jan 1640/41 Massachusetts Body of Liberties (1641) Early written expression of the liberties asserted by the colonists in reaction to the oppressions of European governments. Lex Rex , Samuel Rutherford (1644). Works of Sam Adams

Teaching Teachers the Power of Place - Home Images top to bottom: Historic house located in the West End Historic District of Waxahachie, Texas, Photo courtesy of Flickr's Creative Commons; The Aloha Theatre and Cafe, Kainaliu, Hawai'i, Photo courtesy of Flickr's Creative Commons; Christine Falls Bridge, Mount Rainier National Park, Photo courtesy of Beth Boland. The Power of Place Historic places cover the vast American landscape. From national parks to sites that embody local history, each of these places has an important historic narrative to tell, each can engage the minds and activate the curiosity of students, and each provides Americans a genuine encounter with the past. The powerful and intriguing nature of historic places provides teachers with an invaluable opportunity to help students appreciate the connection between their lives and the historic narratives, themes, and ideas of our nation’s past. Teaching and Learning Professional Development Please enjoy browsing and using this addition to our website.

A Brief History of Income Taxes Updated for Tax Year: 2010 Did you know President Abraham Lincoln, one of America's most beloved leaders, also instituted one of its least liked obligations - the income tax? In this brief history of taxes, see the historical events which shaped income taxes in the United States today. Click on the infographic below to open it in a new window. Created by Infographic World Want to use this infographic on your site? <iframe title="TurboTax A Brief History of US Income Taxes Infographic" width="657" height="6170" src=" frameborder="0"></iframe><br /><a href=" Done Right</a> with TurboTax

Explorers of North America Juan de Oñate y Salazar (1550?-1626) was a Spanish conquistador who established the colony of New Mexico for Spain and became New Mexico's first governor. Oñate, the son of a conquistador who made a fortune in silver, was married to a granddaughter of Hernán Cortés. In 1595, Oñate requested that he be sent to conquer and rule New Mexico, search for treasure (especially the legendary silver treasure of Quivira), and bring Christianity to the local Indians. In 1601, Oñate led an expedition to the Great Plains of America that tried, unsuccessfully, to find the legendary silver of Quivira (thought to be in what is now central Kansas, east of Salina). Later in 1606, Spain removed him from office (Don Pedro de Peralta was appointed to be the new governor); Oñate was later tried and found guilty of cruelty, immorality, mismanagement, dereliction of duties, and false reporting. Go to a printable read-and-answer worksheet on Onate.

History of the U.S.: A Ridiculously Long and Incomplete List of Things Ben Franklin Invented We all remember Ben Franklin as a pretty bright guy who discovered some pretty important stuff. The real question is, what didn’t this polymath genius invent? 1742: Observing the wasteful use of firewood in inefficient colonial fireplaces, he designed the Franklin Stove, which used its iron body to diffuse a much larger proportion of the heat. 1752: To allow his brother to urinate while suffering from kidney stones, Franklin invented the first flexible urinary catheter used in North America. 1763: Franklin, who had been appointed postmaster of Philadelphia in 1737, came up with the odometer. 1770: He named and described the “Gulf Stream”— the giant Atlantic current circulating between the Gulf of Mexico and the west coast of Ireland— and correctly identified it as the reason the voyage from Britain to America took longer along certain routes. 1784: Troubled by being both near- and far- sighted at the age of 78, Franklin improved spectacles by inventing the “bifocal.”

Activity One Students: Create a Compass Instructions for Students Two types of compasses are included in this activity. The box compass is more complicated and requires more materials than the water compass. A water compass can easily be made during a class period. Create a Box Compass Materials: Square box with sides no more than 2" high (bottom of a half-gallon milk carton will do)Cardboard circle small enough to lay flat in bottom of box1 1/2" nail with head1 large paper clip, straightenedCompass Rose (click to download a pdf file)Magnet (one from the front of the refrigerator will do)Glue or tape Directions: Pierce the center of the box bottom with the 1 1/2" nail from the bottom up into the box.Take the straightened paper clip and compare to the diameter of your compass rose. Create a Water Compass Small paper clip, straightenedSmall piece of styrofoam (packing peanut works great)Bowl of waterMagnet (one from the front of the refrigerator will do)Permanent marker Back to Activities

US History Blog | AP History Notes US History Blog New Funeral Photos? (American Presidents Blog) An interesting history-related post from American Presidents Blog: Two new photos of Lincoln's funeral procession might have been found:Paul Taylor, 60, of Columbia, a retired federal government accountant, believes the scene is on Broadway, outside New York’s historic Grace Church. The day is Tuesday, April 25, 1865, 11 days after Lincoln was shot at Ford’s Theatre in Washington. And the crowd is waiting for, and then seems to be paying homage before, a horse-drawn hearse, whose motion makes it appear as a black blur as it passes by in the second picture. If Taylor is right, scholars say he has identified rare photos of Lincoln’s marathon ... Read the original post. Patriots Day Week Begins (Boston 1775) An interesting history-related post from Boston 1775: Saturday, 12 April, seems to be the start of this year’s commemoration of the Battle of Lexington and Concord. Read the original post. Read the original post. Read Full Post

"The Bostonians paying the excise-man, or tarring and feathering." A 1774 British print depicted the tarring and feathering of Boston Commissioner of Customs John Malcolm. Tarring and feathering was a ritual of humiliation and public warning that stopped just short of serious injury. Victims included British officials such as Malcolm and American merchants who violated non-importation by importing British goods. Other forms of public humiliation included daubing victims’ homes with the contents of cesspits, or actual violence against property, such as the burning of stately homes and carriages. This anti-Patriot print showed Customs Commissioner Malcolm being attacked under the Liberty Tree by several Patriots, including a leather-aproned artisan, while the Boston Tea Party occurred in the background.

19th Century | US History Scene “Oral history is an interviewing technique through which to record the stories and lives of people, emphasize a diversity of voices, and investigate a topic of historical interest. Interviews can be conducted within a family or community, center upon a … Below are the live feed videos for the “New Media in American Literary History” conference at Northeastern University on December 5-6, 2013. “New Media in American Literary History” brought together “digital” and “analog” scholars interested in the history of American … It’s a story we all think we know. “Uncle Harry says we’re just policeAnd he should really know—We’ve arrested wars since we began,And dealt the final blow.” – Anonymous The Marine Corps is one of the smallest, yet perhaps most publicized of the U.S. military … In 1773, Connecticut native John Ledyard dropped out of Dartmouth College to travel the world. Celebrate Black History month each day in February with U.S.