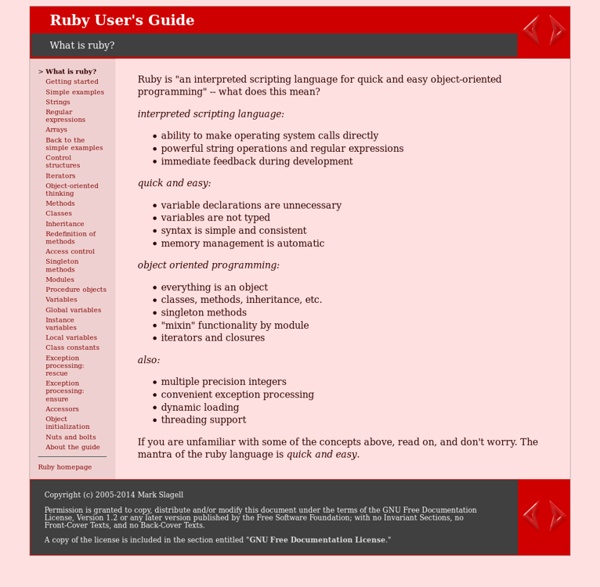 The Unofficial Ruby Usage Guide You may be interested to know that this document was originally written for internal use in the Operations department at Google. At the time, I was campaigning for the right to use Ruby on internal projects and I felt that a style and usage guide would probably assist in the battle for the language's acceptance, as the officially sanctioned languages at the time already had one. If nothing else, we'd at least all end up writing code that was easier to maintain. Over the last few years, Ruby has struck a chord with programmers as an excellent tool for -- amongst other things -- system administration. If you have questions about this document, please address them to its author, Ian Macdonald. An Admonishment As you read this guide, try to keep in mind that the primary objective is to help you write legible code. irb irb stands for Interactive Ruby. [ianmacd@baghdad]$ irb irb(main):001:0> 42. Similarly, "foo". irb(main):001:0> "foo". irb --readline -r irb/completion ri ri -c ri Hash ri 'Array#<<' $ .

Rosetta Code Code Snippets Top 10 Professional Sample Code Websites For Programmers Most programmers are not just desktop programmers, web programmers or scripting gurus – they are often all of the above. Over time, most software developers find that it’s much easier to re-use code components than it is to recreate the wheel every time you write an application. Over time, these developers typically archive a library of these reusable modules in order to save time the next time they need to do the same task. Now, thanks to the power of the Internet, there is a proliferation of websites where professional programmers offer these modules to the general public for absolutely free. For other application developers, these libraries are a goldmine. Choosing the Top Websites for Sample Code Every developer has a list of their favorite websites where they not only search for free sample code, but they also take part in the developer community that exists at these sites. The following is, by no means, an exhaustive list of the best developer websites online. #2 – SourceForge.net